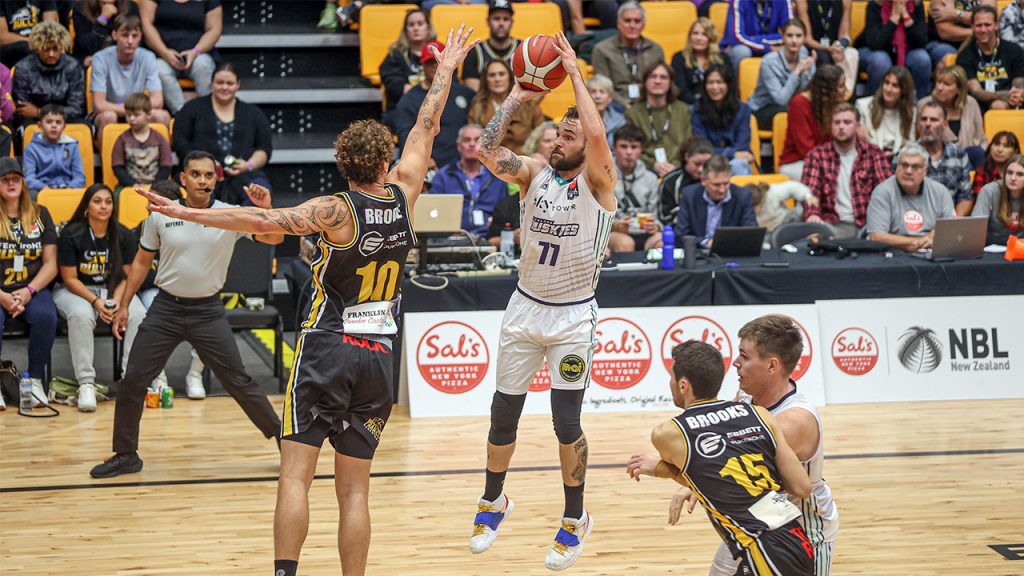 AUCKLAND Huskies have saluted in the tightest of matches to secure a win in the ‘Battle of the North’ clash, defeating Franklin Bulls by three points thanks to a late Jeremy Kendle dagger. The Huskies got up 99-96 at the Bulls’ home court last night, trailing by six points at the final break, but then scoring 30-21 in the last term to grab the victory. It was far from a simple run home though, with the Bulls in front in the dying 30 seconds, before the Huskies held their nerve and regained the lead by the final buzzer.

The first term saw the Bulls start off strongly, scoring 24-17 to take and early seven-point lead into the break. The home team was making it count from beyond the arc, with Denhym Brooke and then Jaylen Gerrand (twice) grabbing their side an early lead. Kendle was getting on the Bulls’ minds though and was already beginning to have an impact in the paint. The Bulls were hitting the scoreboard in a big way though, with another Brooke triple with five minutes on the clock, and the lead had ballooned out to 17-6. The Huskies hit back to score nine of the next 13 points to cut the deficit to six, as Nicholas Barrow was starting to add to his total. Brooke was still a problem though, securing an and-one chance, and then Bulls took the first break with a strong advantage.

The early going in the second term went all the way of the Huskies as Zach Riley, Theo Johnson and Kendle piled on eight consecutive points for the visitors to hit the front within 90 seconds. Josh Selby steadied the ship for the Bulls, but he Huskies were beginning to hit their straps. They got out to an eight-point lead when Dontae Nance nailed a triple, but the Bulls kept the Huskies within arms-length to head into the break only four points down, but it was a dominant last 15 minutes from the Huskies who were on a 46-31 roll since being 17-6 down.

A Nicholas Fee triple in the opening 10 seconds of the second half show that the Bulls were up for the fight, but Barrow responded a minute later for the Huskies. After leading by six points with seven minutes on the clock in the third term, the Huskies watched their lead evaporate as it was the Bulls’ turn to take control. Fee hit a triple and then Selby nailed back-to-back layups and the Bulls were back in the lead. The Huskies regained it back with a few minutes remaining, but Selby and Dane Brooks proved to be a problem and the Bulls held a handy six-point buffer at the final break.

The intensity was high early in the final term as neither team could strike in the first 90 seconds, but it was Gerrand who hit the two-point jumper for a seven-point Bulls lead. It was never going to be enough the way the game was going, and the Huskies kept getting it back to within a single basket with every chance they got. Each challenge was answered, and with six minutes left, the teams traded baskets – and the lead – multiple times.

Once Brook Rosuco-Taiaroa put his Huskies in front 86-85, then nailed a triple moments later, the lead was beginning to grow. Shot after shot missed, with Adam Dunstan eventually breaking the drought for the Bulls, and Nance responding almost immediately for the Huskies. Joseph Nunag handed the Bulls the lead with two minutes on the clock as the sides prepared their final substitutions for the run home. When Brooks scored a two-pointer, the lead was three and the Bulls were in a better position. He would miss the next two-point jumper though, and Barrow made a free throw, and Kiana Saxon produced a successful jump shot and scores were level with 38 seconds on the clock.

Selby held his nerve with two successful free throws in the last 30 seconds, and the Huskies made the decision two points down they would take out the clock until an opening, which they found through Kendle who made no mistake. With nine seconds remaining, the Huskies were 97-96 up. The Bulls hoped Selby would be the man to win the game a second later, but the shot missed, and a deliberate foul on Nance after collecting the rebound sent him to the line where he hit the winning free throws for a 99-96 victory.

Auckland Huskies next face Manawatu Jets on Friday, while the Franklin Bulls take on the Jets the day after in a quick turnaround for their opponents.