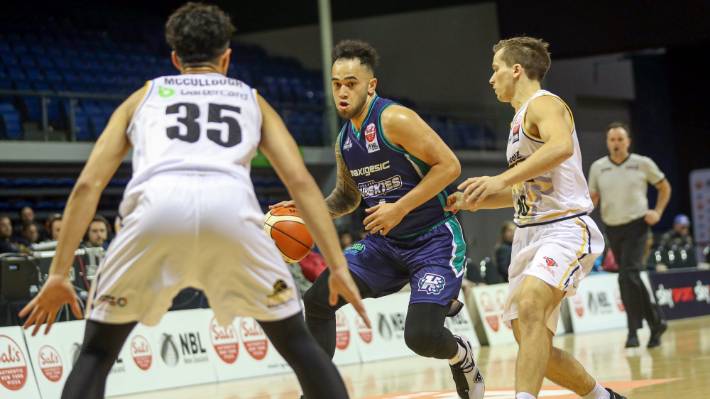 IT was a Battle of the North with the Franklin Bulls and Auckland Huskies going head to head in the first game of Week 4 for the 2020 Sal’s National Basketball League (NBL) competition, with the latter clenching a huge upset over the second placed Bulls (86-82). With the Bulls getting out to a strong lead in the opening term the Huskies were forced to play catch-up throughout the game but that did not seem to faze them, steadily building into the match and eventually overrunning their opponents. There was over seven lead changes throughout the course of the game testament to how even the contest was on the night.

The Bulls got out to a flyer in the first quarter piling on a wealth of pressure and flexing their muscles on the scoreboard to hold a commanding 12-point lead. Despite Tohi Smith-Milner opening the account with a jump-shot for the Huskies, it was all one-way traffic from then on as the Bulls simply could not be denied. Dominique Kelman-Poto was on song from the first minute sinking a triple before partner-in-crime Sam Timmins chimed in. The influence of Nicholas Barrow was undeniable with the big man able to hit the scoreboard with great ease for the Bulls and cause all sorts of havoc across the court. A late burst from the Bulls saw them go on a scoring rampage with the Huskies simply unable to generate any form of rhythm in attack or defence.

Up by 12 points at the quarter break the Huskies were determined to reduce the deficit and impose themselves on the contest. Their increased intensity across the court and willingness to drive to the basket became increasingly more evident as the quarter progressed cutting the margin down to five points. But it was their three point shooting that stunned both fans and the Bulls, with the Huskies sinking four straight treys with Reuben Fitzgerald, Jaylen Gerrand and Smith-Milner dishing up the goods. Back to back threes from Smith-Milner and a huge steal from Izayah Mauriohooho Le’Afa  got the Huskies back within two points before Timmins answered to steady the ship.

The game was played with great speed as the ball ping ponged up and down the court with Mauriohooho Le’Afa finding his stroke and causing all sorts of havoc. With the pressure mounting on the Bulls it was up to Timmins to once again stand up, laying a huge block while Taine Murray showcased his dash with a fast break and clever assist to none other than Smith-Milner. The out of contract Melbourne United big man impressed throughout the quarter, knocking back shots from inside the paint, beyond the arc and at the charity line. With a tick over three minutes left in the term Marvin Williams-Dunn evened things up for Auckland and despite the Bulls bigs in Barrow and Timmins dominating on the scoreboard with the latter finishing the half with a double-double 14 points and 10 rebounds the Huskies seemed to have all the momentum. A triple on the buzzer to Jackson Stubbins gifted the Bulls a four-point lead after what was a see-sawing term.

Known as the premiership quarter, the Bulls immediately extending the lead with Everard Bartlett sinking all three shots from the charity line. Smith-Milner quickly responded with a couple of points his own but neither side was able to claim any real ascendancy as the ball bubbled about. Out to a six point lead the Huskies dug deep to stay in the contest  and claw their way back to within two points. Williams-Dunn and Mauriohooho Le’Afa upped their workload with the two looking to the rim and scoring. Barlett continued to be the go to man for the Bulls draining them from range while Nikau McCullough tried to inject himself into the contest with a couple of strong rebounds.

With five minutes on the clock, Auckland hit the front thanks to Smith-Milner. After a relatively quiet half of basketball, Isaac Davidson found his stroke with a nice three, while Timmins also got busy to create a five-point buffer once again. Unfazed by the increased pressure, Mauriohooho Le’Afa upped the ante sinking them from range. Stepping back on the three, Mauriohooho Le’Afa put his side ahead while Tohi Smith-Milner delivered once more, coming up strong with a rebound and streaming down court with Nathan Wilson the beneficiary to hold a three point lead heading into the final change.

With the game on the line the big names for each side stood up with the Huskies getting an early with a forced turnover in the opening stages of the quarter. The defensive pressure was palpable with both sides going three and a half minutes without a score. The physicality of the contest did not disturb either team with the Bulls almost enjoying the challenge and slowly working their way into the contest. Kelman-Poto was involved in everything, swinging the momentum back to the Bulls with a crucial rebound and layup to regain ascendancy on the scoreboard.

After going quiet in the middle stage of the game Gerrand found his stroke forcing the lead to once again change hands. The lead chopped and changed and was cut down to as much as two points with less than three minutes remaining. Timmins hit a timely triple to retake the lead albeit by one point and followed it up moments later spiking the ball out of play and denying the Huskies easy avenue to the basket. With Kelman-Poto fouled out of the game for the Bulls, Huskies big man Mauriohooho Le’Afa delivered once again. With a minute left on the clock Stubbins hit his second three pointer of the game to snatch the lead off the Huskies but it went all downhill from there for Franklin with Smith-Milner reeling in a rebound and Murray making them pay with a triple of his own. Mauriohooho Le’Afa all but ended the chances of a final seconds comeback coming up huge with a steal to take home their fourth win.

Timmins was the main playmaker for the Bulls finishing the game with 21 points, 15 rebounds (11 defensive) and two blocks. Teammate Kelman-Poto also managed double digits with 15 points and eight rebounds while Barrow and Stubbins also recording 10 points each. It is no surprise that Mauriohooho Le’ Afa dominated on the scoreboard amassing a whopping 25 points, seven assists and six rebounds. Smith-Milner also had a stats stuffing performance with 22 points and 13 rebounds while Murray was the only other player to make into double digits with 11 points.