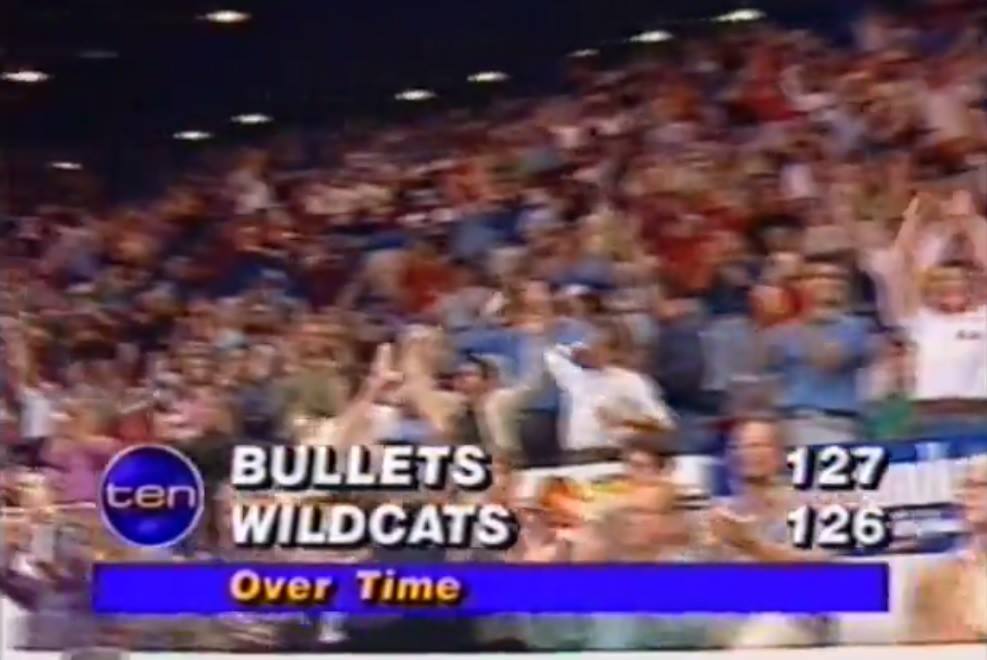 IN the 21 years that Shane Heal played professional basketball, he would remember at least a handful of games. His first game in the National Basketball League (NBL) for the Brisbane Bullets in 1988, his first game in the National Basketball Association (NBA) at Minnesota in 1996, the championship he won with the Sydney Kings, and of course the four Olympic Games he competed in. However, as his Fox Sports colleagues commentated on the historic match between Melbourne and Illawarra last weekend, Heal’s memory would take him back to a regular season match-up between the Brisbane Bullets and the Perth Wildcats on June 4, 1994, and arguably the greatest “forgotten” game of basketball in Australian basketball history.

“I remember cramping up in regulation and then throughout the overtimes, it was during a hectic period” Heal said. Hectic was an understatement! The 23 year-old Melbournian had just returned from Australian duties to a Bullets side that was playing terrific basketball. The Bullets flew out of the blocks in the ‘96 season, with a seven win and two loss start, placing them in second position behind the now-defunct North Melbourne Giants, who had only dropped the one game. Heal’s Bullets now had to face a competitive rival in the Perth Wildcats, who at eight and three and in third position, were breathing down their necks. Therefore, this game was worth “double” the amount than any other regular season match-up would usually be. Little did every player know, they would all become a part of history on this evening.

Heal started the game well with a beautiful outlet pass on the fast break, setting up the first two points of the match to Roger Smith. This was just the beginning of what would be a terrific game for Heal, who has fond memories of the match. He finished the game with 43 points, seven assists and nine boards, as well as the winning basket. “It was the first time I scored over 40 points in an NBL game and doing it with a game winner was a special memory” Heal said, clearly proud of a milestone achievement.

The 1994 season had yet to see an overtime game, and as the clock wound down with five seconds to go, Brisbane nearly won the game. After an inbound pass with 15 seconds to go, Eric Watterson turned the ball over after some terrific defence from Heal. The ball magically ended up in the hands of the one other man that could do magical things in Leeroy Loggins. Loggins, the American import who was drafted by the Pistons in 1980, sprinted down the court blowing past Watterson, and shot a mid-range runner with five seconds remaining. The shot missed, yet the referee called a foul on Loggins after the shot took place. This was a massive call by the referee, and it bailed out the Wildcats, as there wasn’t enough time for the Bullets to inbound the ball and run a play. Brian Kerle, a man who coached 456 games of NBL, had mixed feelings at the end of the first overtime.

“It’s unfair that there has to be one winner, but both sides can walk away with their heads held high, as it has been one of the best games I have ever seen” said Kerle. However, unbeknownst to “Mr. Basketball”, this game still had a long way to go.

Like the Melbourne v Illawarra match-up last week, the overtime in this game was highlighted by some enormous shots. As the clock wound down at the end of the third overtime period, Heal took advantage of an over-exuberant block attempt by Watterson, and hit a clutch three (his forty-first point of the game) to tie it up with 20 seconds remaining. However, this wasn’t the game-winner that Heal referred to earlier. That would come at the end of the fourth overtime, exactly 18 minutes and seven seconds later.

Towards the end of fourth overtime period, Perth was leading by a point (125-124). The marathon game had gone for approximately an hour longer than a four-quarter game. The crowd were chanting for their Bullets in a desperate attempt to get their side over the line with only 13.7 seconds left and one play remaining. Brisbane Bullets small forward, Rob Sibley inbounded the ball to power forward, Andre Moore and got the ball back immediately. Sibley looked as though he didn’t want it back, and instantly, you see the peroxide blonde hair of Heal fly into action. Heal ran around Sibley and received the ball off him. With the paint crowded, Heal had no way of getting directly to the basket, so he drove to the opposite baseline before hitting a fade-away jumper over the top of James Crawford. With 3.7 seconds left, and a timeout, Perth tried desperately to respond. Andrew Vlahov went desperately close yet the shot missed, and the Brisbane Bullets won the game 127-126.

“Playing Perth in front of 12,000 supporters at home in Brisbane (got us over the line)” Heal said. “You just never realise how unique four overtimes would be, and the fact that it’s been 24 years since the last one is incredible”.

This simply has to be one of the greatest “unknown” or “forgotten” games of basketball ever played in Australia. I’ll leave the final word to Perth Wildcat legend, Ricky Grace. Grace, who suited up but never entered game due to injury, had a unique take on the game.

“I don’t recall much of that game other than I was hungry and I couldn’t wait until it finished,” he said. “It would’ve been a great game to play in to get your averages up, however!”

Well said, Ricky. I’m sure you were not the only one thinking that.