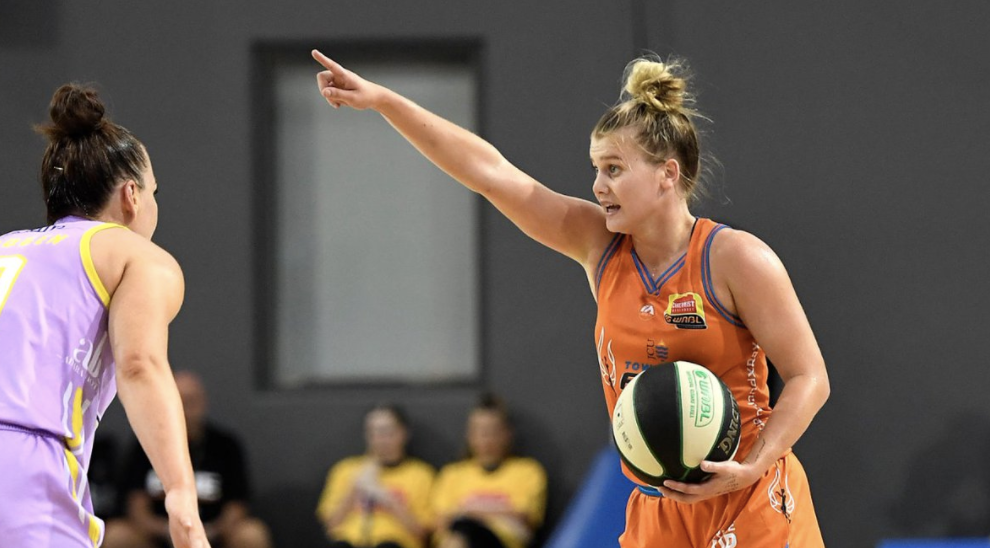 THIS season’s WNBL Grand Final will have a home-court advantage, after Townsville Fire squeezed out a three-point victory against the Melbourne Boomers in last night’s preliminary final, 65-62. The Fire have managed a complete flip from a season ago, going from wooden spoon recipients in 2019/20 to now facing the Southside Flyers tomorrow afternoon in what will be a must-see season decider.

Neither of the two teams were able to take command of the prelim in the opening period, but good shooting and some terrific finishing allowed Townsville to hold a solid five-point advantage with Shyla Heal exhibiting some good shooting early on with seven points after one quarter.

Kalani Purcell kicked off the second with her first basket of the contest in a see-sawing affair throughout the first half. But the second term provided little scoring and inconsistent offence with both teams locking down on defence. Winning the second quarter 12-11, Melbourne trimmed the deficit to four points in time for the main break meaning that the contest still hung in the balance.

Early on in the second half, more of Melbourne’s usual producers started to make a difference such as Maddie Garrick, Cayla George and Ashleigh Karaitiana. Guy Molloy’s squad found the majority of their points in the third thanks to Tess Madgen’s ability to facilitate the ball. But the Fire returned serve with a six-point scoring run to give themselves a temporary buffer at an important stage of the game with 10 minutes to go, leading 54-47 at three-quarter time.

The Boomers had a formidable mountain to climb and Heal’s layup to get the fourth going did not help Melbourne’s cause. However, the purple and gold continued to stick around in a game as important last night’s.

Having not made a dent in the margin and actually falling behind by as much as nine points, the Boomers kicked into desperation mode with less than five minutes remaining before coach Molloy deployed his starting five back onto the court to finish the game. The same could be said for Shannon Seebohm with the only exception being Megan McKay because of foul trouble, thus allowing Zitina Aokuso the chance to help close the book.

A layup for Karaitiana, two buckets from Ezi Magbegor and a fast break layup for Garrick, sparked eight unanswered points for the Boomers in their last roll of the dice cutting Townsville’s lead down to just one point. But two made free throws with 21 seconds from none other than Heal put the Fire up by three.

Melbourne’s flurry of threes in the dying moments were not enough to save the contest, meaning Townsville would head to the grand final for the sixth time in nine years, a feeling of success that Townsville’s faithful feared they would not have for the next few years.

Adding to her collection of impressive performances in WNBL20, Heal finished her night with 28 points, five rebounds and three assists, while fellow backcourter Lauren Nicholson played a full 40-minute game compiling 12 points and eight rebounds. Adding to this was Aokuso, accumulating 10 points and five rebounds, as well as WNBL legend Mia Murray providing a much-needed presence on the glass with eight boards.

Melbourne’s frontcourt was its primary producer last night, with Magbegor (19 points and nine rebounds) and George (15 points, 10 rebounds and five assists) putting up impressive statistics. Furthermore, despite no other Boomers gaining double-digit totals Madgen was instrumental yesterday even though the side could not get it done with nine points and six assists.

It is the end of Melbourne’s remarkable road, but Townsville’s triumph provides a first versus second seed grand final and a chance for the Fire to redeem themselves at the best possible moment. Even though the Flyers have two days of extra rest going into tomorrow, you can rest assured that the Townsville fans will provide their club with a massive chunk of adrenaline in 24 hours.