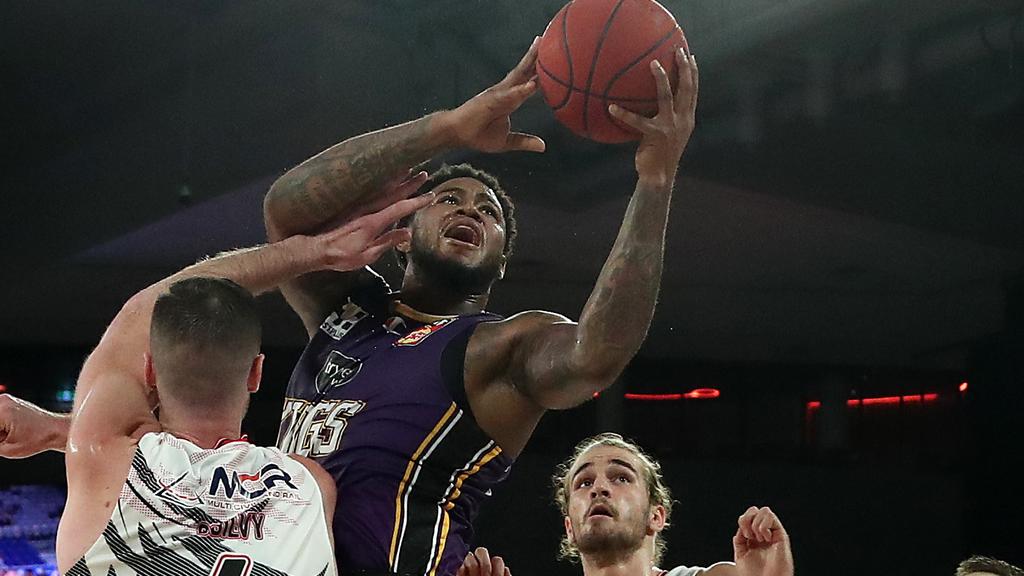 CROSS-STATE NBL rivals Illawarra Hawks and Sydney Kings did battle in an entertaining first half, but a dominant third quarter from the Hawks gave them a healthy 89-69 win showing glimpses of their early season form. Sydney was kept to their lowest season score in what was the one hundredth meeting between these two sides after scoring just eight third quarter points.

This was exactly the response coach Brian Goorjian was after following their abysmal performance against the Wildcats on Sunday. The Kings, however, were coming off a good win and were buoyed with the return of their import big man Jarell Martin.

It was that man that the Kings were running their offence through early as they fed it to the blocks with great success. His opponent in Sam Froling was up to it at the other end though, as he was on his way to a big night.

The key for the Hawks was Justinian Jessup who has clearly struggled recently. He was called for an offensive foul early on but responded in a positive way as he facilitated the offence instead of forcing up shots.

Six missed free throws from the Hawks cost them a quarter-time lead with proceedings matched at 24. Tyler Harvey was 2-6 from the line despite being 37-40 for the season.

There was a clear contrast in styles early as an Illawarra outfit with high intensity and good ball movement saw them find looks inside for 16 of their 24 points, while the Kings took nine shots both inside and outside.

The second quarter flagged Illawarra’s second-half dominance as they looked to have found their mojo from earlier in the season with Jessup and Harvey hitting shots, Deng Adel getting out in transition and dunking, and role players doing what was required.

Despite this, the Kings were within one point at half-time thanks to Tom Vodanovich’s spark off the bench and Didi Louzada’s effort on both ends.

Things started to unravel for Sydney from there though, as they were outscored 25-8 in the third quarter. A nice Harvey three on a set play on the first possession of the half should have provided ominous signs for Sydney, but fluent ball movement and disciplined, high-effort defence was the key behind the reduction in points. Comparatively, the Kings were static and lacklustre offensively as they shot 2-13 from the field and conceded five turnovers.

The final quarter still had the NBL Cup point on the line as the Kings were looking to take something out of the game, but it was mostly junk time as Illawarra gave some deep rotation players some minutes.

The Hawks won the final quarter and won the game 89-69 as they solidify third spot on the ladder.

Froling led all-comers in points with 20 on 9-10 shooting to go with six rebounds. He said he had a couple of games where he “hadn’t felt [him]self”.

“Came out tonight, was being aggressive and we were moving the ball a lot more so I got a few more looks and it happened from there,” he said.

Harvey continued to lead from the front with 17 points, four rebounds, and four assists and said that tonight was about “getting back to ourselves”.

“We’re going through the grind right now you know, it’s not easy so you got to have that growth mindset every single day,” he said. “We lost that for a bit, but coach has a way of finding things, knowing what to say and how to say it so hopefully we carry it on to Melbourne”.

Dejan Vasiljevic was the only Kings player to reach double digits with 12 points, while Martin was looking strong for six points before minutes restrictions saw him remain on the bench for the second half.

Jordan Hunter scored his first field goal late in the game after scoring in double digits for three of their last four games, while Casper Ware shot 2-10 for six points.

Illawarra shot 52 per cent from the field compared to Sydney’s 37 and recorded 10 more assists, indicative of the efficiency from Illawarra and Sydney’s lack thereof. Both teams shot a combined 16-35 from the free throw line however, as the Hungry Jacks cheeseburger code would have had to have been supplied numerous times on the night for consecutive missed free throws.

Both teams will play off on Saturday’s double header with tough matchups as the Kings take on the Bullets, and the Hawks play Melbourne United.