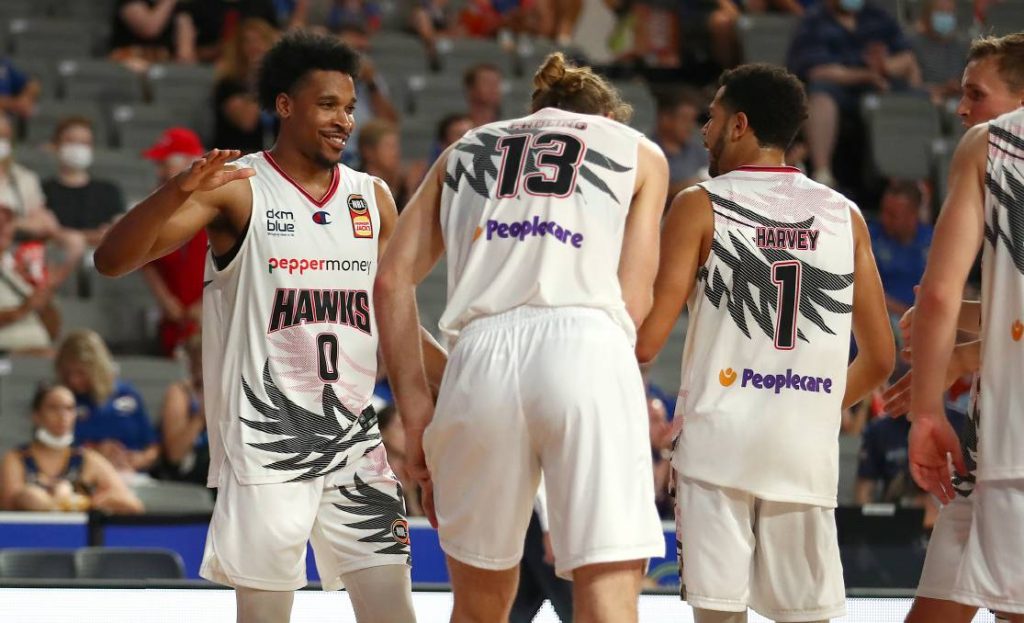 AS a part of an entertaining twist to the start of the season for last year’s wooden spooners, The Hawks toppled the Brisbane Bullets, 90-84, and consolidated their first win on their first attempt in hostile territory, thus ending a losing streak that dated back to middle stages of the 2019/20 campaign.

In front of their restless and eager home crowd, the Bullets made sure to get their noses in front right away, putting up seven of the first nine points in yesterday’s opener with Vic Law marking his NBL debut on an alley-oop jam.

Despite a somewhat sluggish start for The Hawks, Brian Goorjian’s side started to make some headway, hanging with their opponents throughout the opening quarter and ultimately tying the game up at 23-23 heading into quarter time with Nathan Sobey and Law putting up six points each for the Bullets, while Emmett Naar held six as well for the Hawks.

After what was an inconsistent opening period, the second proved to be more of a grind for both sides as each team had to go the extra mile in converting on field goals. However, key moments from individuals like Jason Cadee and his deadeye accuracy from deep provided Brisbane with extra motivation in the first half.

But the Hawks continued to stick around in the second term, leading 41-38 at half time in Nissan Arena and neutralising the home crowd in the process. Justin Simon led all scorers after 20 minutes with 11 points and four rebounds, while Law held a team-high eight points at the main break for the Bullets.

Obtaining three of the first four buckets, the visitors extended their lead to seven points and took a firm grasp of the game coming out of half-time. The Bullets answered back quickly getting back to within a possession and keeping those in attendance on the edge of their seats.

With scoring coming at a premium on both ends, Brisbane’s deficit remained at three points with just a quarter left to play even though marquee signings Anthony Drmic and Harry Froling were putting up substantial contributions. But Harry’s younger brother Sam Froling had other things on his mind, collecting his fifteenth point of the clash moments before the conclusion of the third.

Another triple from Cadee three minutes into the fourth gave Brisbane the lead, after which Cameron Bairstow responded back with a three of his own, commencing a high-octane final quarter.

Following a sequence of events in the final couple of minutes that saw Bairstow convert on numerous late baskets, another awesome alley-oop to Law and Sam Froling putting the exclamation point on his opening game of the season, the Hawks snapped a 10-game losing streak that dated back to mid-way through last season with Coach Goorjian starting his leadership at the Illawarra-based side with a massive win.

Excluding their average 43 per cent conversion rate, the Hawks relied on their second chance points (13) and their bench, who outscored Brisbane’s secondary unit 39 to 24, which was helped by forcing 12 takeaways from yesterday’s hosts.

Froling rounded out an impressive performance last night with 19 points and four rebounds credited to his name, as Naar was imperative off the bench with the second-highest 17 points, five rebounds and five assists. Furthermore, Tyler Harvey (16 points and three rebounds) and Justin Simon (13 points, eight rebounds, five steals and four assists) each cracked double-digits for the Illawarra-based squad.

Despite taking the loss, the Bullets’ captain was instrumental for his side, as Sobey logged 19 points and three assists, but giving up the ball five times on the other hand. Law also impressed with 17 points and 10 rebounds, while Drmic (14 points and five rebounds), Cadee (12 points from four threes) and Froling (10 points, 12 rebounds and four assists) all made sizeable contributions.

The Hawks can continue their dream start with another win on Monday, but this time against an imposing Cairns Taipans side who are ready to initiate another championship push. As for the Bullets, they have until Thursday to get their act together before commencing their rematch against the Hawks once again.