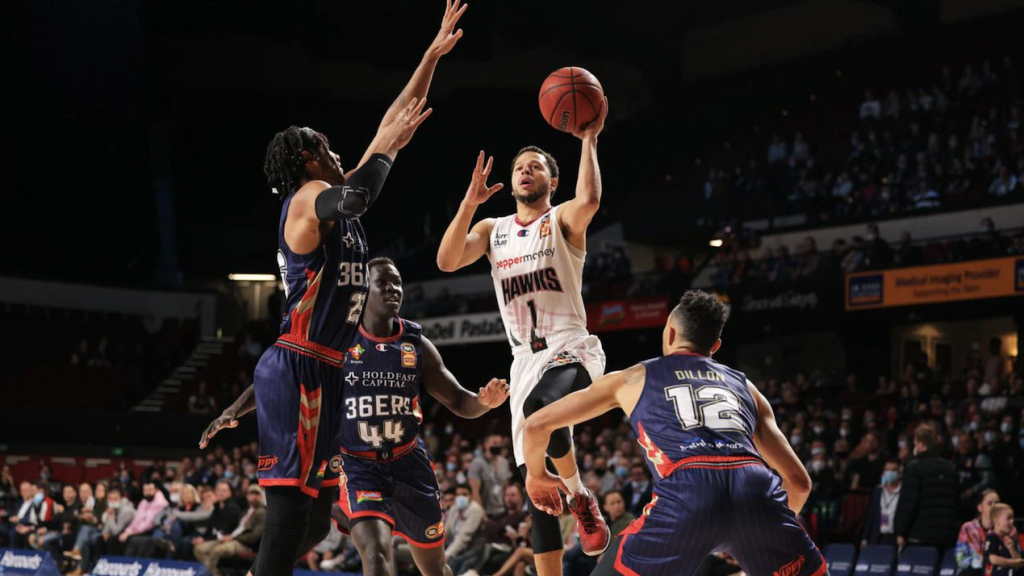 ILLAWARRA Hawks are in the box seat to secure one of the two remaining finals spots after downing Adelaide 36ers on the road last night. The Hawks have strung together some form of late, winning four of their past five games – whilst fifth placed Sydney Kings have lost four of their past five – to sit with a 16-15 record heading into the final stages of the season. In last night’s battle with the 36ers, the Hawks all but spoiled the party for the home side who had to farewell young gun Josh Giddey to prepare for the NBA Draft, and went down by eight points to an impressive Illawarra outfit, 81-73.

The Hawks jumped out of the blocks early and took complete control of the contest in the opening half to set up what looked to be an unassailable lead. In almost identical fashion, the Hawks won the first term 24-14, then triumphed in the second term with a controlling 26-14 to lead 50-28 at the half. An even third term saw the 36ers peg one point back, and then they stood up in the last with 27-14, but the damage was done and by then, it was too little, too late and the home fans went home disappointed.

Sam Froling finished with 19 points, seven rebounds and two steals in the win, teaming up well with Tyler Harvey who had the 18 points, four assists, two rebounds and two steals. Also stepping up from the starting lineup with Justin Simon (10 points, three rebounds, three steals and two assists), whilst off the bench, Isaac White (16 points, four rebounds) and Deng Deng (10 points, seven rebounds) both contributed well to the cause. Emmett Naar might not have scored a point, but he had the seven assists and four rebounds in 16 minutes, while AJ Ogilvy finished with six rebounds and six assists – but only four points – in 21 minutes on court.

For the 36ers, Daniel Dillon was the top scorer with 17 points, eight rebounds, five assists and two steals, followed shortly by Daniel Johnson (13 points, two rebounds and two assists) who did not have his usual dominant impact from 31 minutes on court. Brendan Teys stepped up coming off the bench for 10 points and four rebounds, whilst Brandon Paul (seven points, five rebounds and three assists) and Keanu Pinder (seven points, six rebounds and two steals) were others who could hold their head high in the loss.

Illawarra Hawks will head home to host the Cairns Taipans at the WIN Entertainment Centre on Sunday at 5pm, whilst the Adelaide 36ers will play two hours earlier, remaining at home to take on the reigning premiers Perth Wildcats, before trekking down to New Zealand on Tuesday to lock horns with New Zealand Breakers.