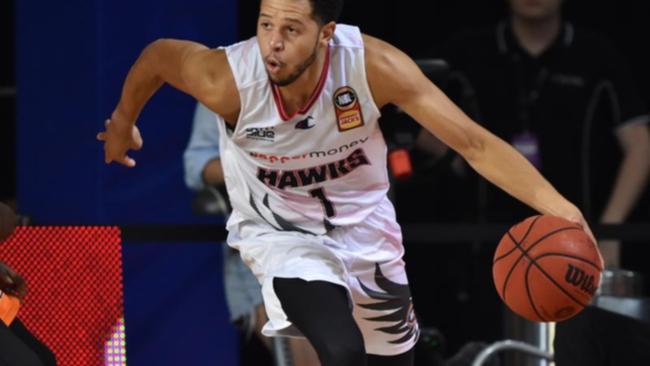 ILLAWARRA Hawks have bounced back from consecutive losses to put away Sydney Kings in a nail-biting three-point win at Qudos Bank Arena yesterday afternoon. The Hawks started the way they wanted to, racing out to a six-point quarter time lead, and despite the Kings hitting back in the second half, the visiting team was able to hold firm and record a memorable 85-82.

The first term went all the way of the Hawks, bolting away to a 26-20 quarter time advantage over their cross-state rivals. All the momentum was with the visiting team in the opening half as Illawarra won the second term by two points in another tight one, to head to the main break with a 50-42 lead. A third term revival by the Kings after half-time saw them completely restrict the Hawks’ shooting, conceding just 11 points on defence while adding 17 themselves to cut it back to just two points the difference at the final break.

Sydney started the stronger of the two teams in the final term, quickly hitting the front before Illawarra stole it back. The likes of Tyler Harvey and Casper Ware were trading long-range makes for their respective sides, and midway through the term, the scores were level. A Ware floating jump shot had the Kings up by three with 4:15 on the clock, before back-to-back baskets in quick succession went the way of the Hawks. Again it was Ware who stepped up with a three-point play, before Deng Adel hit the turnaround jump shot and scores were level again.

It stayed that way until 1:40 on the clock thanks to a driving Craig Moller layup, but Harvey was there to save the day with a long-range make to hand the Hawks the one-point advantage with 53 seconds on the clock. Ware responded yet again in a huge final term for the talented shooter, putting the Kings up 82-81. It would be the last score for the home team with 40 seconds remaining, as Justin Simon made a layup, then pickpocketed Ware and forced Brad Newley to commit the deliberate foul on Adel who made no mistake from the line. A last ditch long-range attempt by Newley to level the scores was mopped up by Simon as the Hawks secured the narrow win.

For the Kings, Ware finished with a team-high 21 points, shooting at 53 per cent from the field, including three of five from long-range. He also picked up six assists and four rebounds on the night. Dejan Vasiljevic had 18 points, three rebounds and two assists, supporting Ware well alongside Jarrell Martin (15 points, two rebounds, two assists and two steals) who went down with injury in the third term. Shaun Bruce became a focal point on offence with nine assists and four rebounds to go with eight points.

Illawarra Hawks head coach Brian Goorjian said his side was able to learn from mistakes late in the game against Melbourne United to better execute down the straight in the final term when the heat was on against the Kings.

“I thought this is a good basketball team and we come in here again a young new group trying to play a very important game against our cross-town rival,” he said. “They weren’t going to let it go, they were going to make a run at us, and what I’m focused on is last game when it was basket for basket down the stretch and we didn’t handle it very well and tonight defensively and offensively we made them take tough shots down the last few minutes of the game and we offensively got good shots and made big plays.

“(The) benefit of a new organisation of losing, where do you go when you lose? “It’s falling down and getting back up and moving forward and growing and I thought from the United game to this game there was a lot to be happy about from our side.”

Sydney Kings head coach Adam Forde said while his team was depleted and down to one stage with just six fit players, the side needed to be better from the first tip-off.

“Obviously the first half wasn’t great again and we highlighted that,” he said. “I think I said in the commentary as well, just those second chance points on the O-boards. “We dug ourselves a bit of a hole to start, but then again I can’t fault the guys for stepping up. “It’s just why do we have to wait until a double-digit deficit or our backs are against the wall to shift that momentum?”

Illawarra Hawks take on Cairns Taipans in the opening match of the NBL Cup starting Saturday, February 20, while the Sydney Kings take on Adelaide 36ers on Sunday, with all matches played at John Cain Arena in Melbourne.