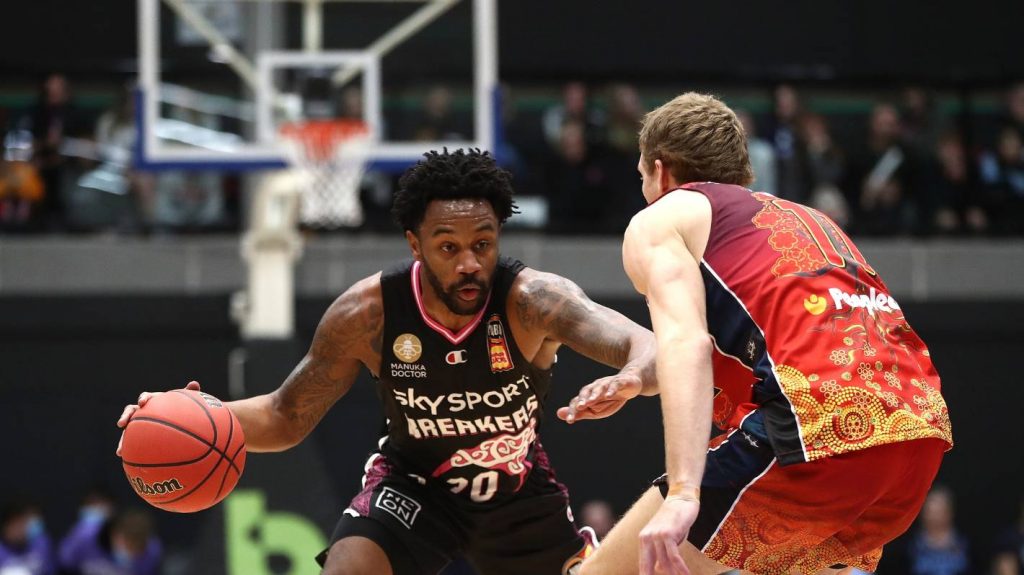 THE Illawarra Hawks found themselves one step closer to securing a National Basketball League (NBL) finals spot, thanks to their 11-point triumph over the New Zealand Breakers at the Stockyard on Friday night. This loomed as a danger game for the Hawks, given the pressure on them to claim a spot in the top four, but they handled the pressure with absolute class, thanks to a standout performance from Tyler Harvey who was instrumental in the team’s 18th win of the season.

The game began with the Breakers jumping to an early lead, thanks to some impressive play from captain Finn Delany. Delany had six points in the first term, as his side worked hard on both ends of the floor to secure a five-point lead at quarter time, courtesy of a Levi Randolph three-pointer with 20 seconds remaining in the term. The Hawks looked shocked, but not rattled. Hawks forward Sam Froling kept his side in the contest during this time, credit to his ability to constantly finish at the rim, despite the consistent pressure from the Breakers defenders. The second term opened with some pretty ugly basketball, with both teams trading missed buckets and silly turnovers. There was just one field goal scored in the first couple of minutes of play. The Breakers found themselves up by eight points halfway through the term, but could not sustain the lead, as Froling once again led a charge that could not be stopped. The Hawks headed into halftime trailing by just three points and with plenty of confidence.

The second half (and particularly the third term) was the Illawarra Hawks show, as the visitors worked their way to a significant run that saw them take the lead for the first time this game. A 13-0 run of scoring saw the Hawks well and truly take control of the game, with the Breakers unable to hit crucial baskets or grab the defensive rebound. The home side looked stunned, and lost all of the mojo that saw them control the game in the first half. The fourth quarter saw more of the same, as the Hawks were able to put the game into cruise control as they sealed the result early in the final term. The Breakers only got within six points in the term, before a pair of Harvey triples put the game to bed, with the Hawks heading home victors.

For the Hawks, Harvey was the star, finishing with 30 points, eight rebounds and five steals, proving the guard can get it done on both ends of the court. He was not alone, with Froling proving nearly just as dangerous with 22 points and eight rebounds of his own. The forward did most of his work in the first half when the game was hanging in the balance. Without his scoring output, the Hawks may not have been in a position to catapult in front like they did. For the Breakers, Delany played a lone hand at times, but his first half was telling, as his side looked to cause an upset. The forward finished with 22 points in a brave performance.

The Breakers will look to bounce back as they take on the Brisbane Bullets on Sunday night at Spark Arena, while the Hawks will face the Adelaide 36ers on Sunday night as they look to edge even closer to the finals.