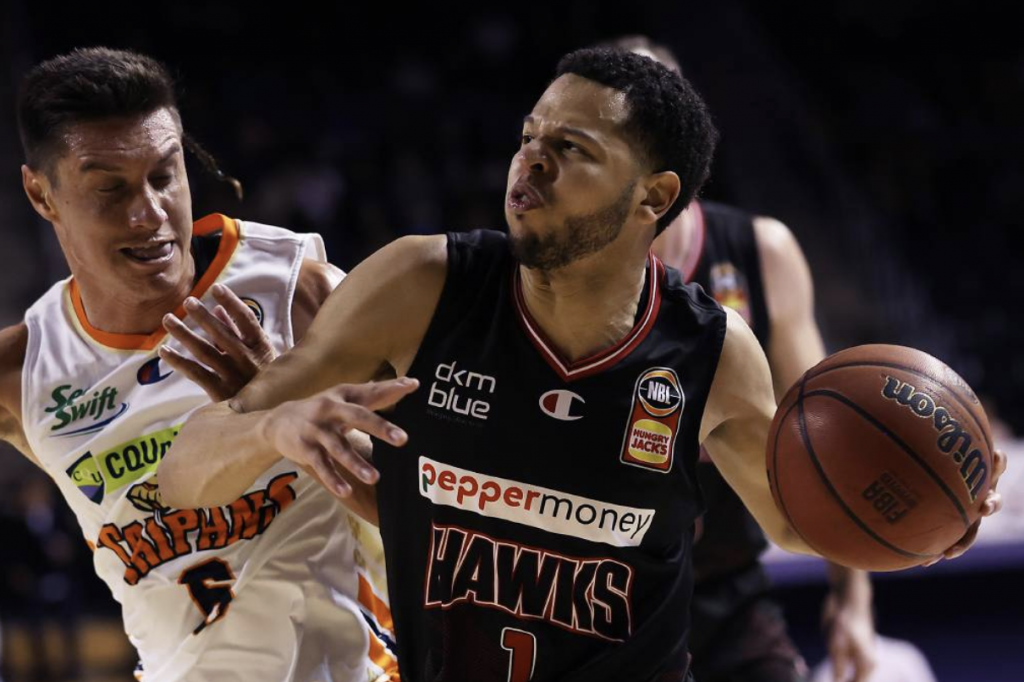 ILLAWARRA Hawks’ star import Tyler Harvey went off in Sunday’s closer for a career night in scoring, leading his team to edge out the Cairns Taipans 82-80 and going two wins clear of the fourth ranked Brisbane Bullets in the NBL standings – bearing in mind the Bullets have three games in hand.

After a tough loss two games prior to last night at home, the Hawks wanted to get off to the best start possible in what was the last game of Illawarra’s three-game home stand. With this in mind, Illawarra’s home crowd spurred their team on to a five-point lead after the first quarter as Harvey put up 10 points in that time.

While Cairns started to strike back after being down 20-25 at the first break, it had to begin through their main weapons in Cameron Oliver and Scott Machado. But as Mike Kelly’s squad started to string together some much needed scores, Illawarra’s Deng Deng and Deng Adel made their presence known to the Taipans finishing strong at the tail-end of the second quarter to put the Hawks up by 11 points at half time.

It was obvious that Kelly needed to inspire his side to a strong start in the third and Oliver felt obliged to step in early as a result. As the Cairns center kept knocking down jumpers, Justin Simon and Sam Froling answered back with buckets of their own and the third quarter ensued.

Backed by Oliver’s 10 third quarter points, Cairns pulled back the margin from 11 points at half time to just five, after a good defensive period which led to the Taipans limiting the Hawks to just 10 points before the fourth got underway.

Both sides traded baskets back and forth during the first couple of minutes in the final term before Nathan Jawai scored five consecutive points to tie up the contest with eight minutes left to play.

The one player that Cairns could not figure out how to contain was Harvey, as the first season import exploded for a career-high night putting Illawarra in the best possible position to finish the contest strongly.

In the final minute, a Simon jumpshot would fall to put the Hawks up by four, however, Jordan Ngatai dropped a triple of his own with 14 seconds on the clock to keep those in attendance on edge.

Luckily enough, Justinian Jessup remained cool and composed under pressure hitting four-straight free throws, allowing the Hawks to walk away with a narrow two-point victory and cap off a successful three-game home stretch, winning two games out of three.

In many areas of last night’s closer, both teams were relatively even throughout the meeting, but Illawarra excelled at scoring in the paint and rebounding at both ends. On the other hand, Cairns were much more disciplined from the free throw line shooting 85 per cent from the charity strike (17-20) and knocked down nine triples compared to Illawarra’s seven. All in all, both the Hawks and the Taipans shot relatively well with the sides shooting 45 and 40 per cent from the field respectively.

There was no stopping Harvey on his way to a career-high 35 points shooting 13 of 24 attempts from the field, as well as three rebounds to add to his performance. Simon was the only other Hawk to crack double digits with 10 points and six rebounds, while Andrew Ogilvy led Brian Goorjian’s roster in rebounds and assists finishing his night with eight points, nine boards and five dimes.

For Cairns, Oliver was head and shoulders above the rest of his teammates with an impressive 27-point, 12-rebound and five-assist outing. A surprising notable performance by youngster Tad Dufelmeier would also be a main headline in the box score with the 24-year-old putting up a season-high 12 points in 13-and-a-half minutes of game time.

Cairns now look to end their three-game losing streak on Wednesday night when they host the Adelaide 36ers, who are hot off a motivating win against the Perth Wildcats. Illawarra Hawks will hope to do the same thing as they head to RAC Arena on Friday to face the defending champions and kick off a Round 14 that will entail clashes against two of the top teams in the NBL.