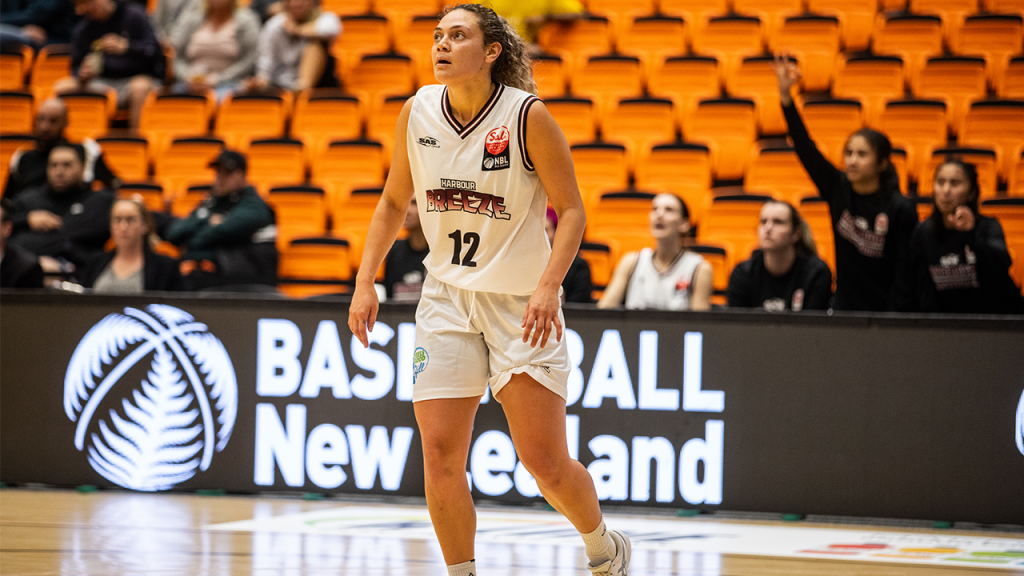 HARBOUR Breeze have ended the regular season of the condensed New Zealand National Basketball League (NZNBL) 18IN18 competition with an unbeaten record for five games, finishing atop the ladder ahead of the semi-finals. In a logjam of four other sides who sit with two wins, they were the clear standout all night against Auckland Dream, setting the tone with an impressive first term and running out 13-point winners. It means the Dream now have a nervous wait, needing Capital Swish to defeat Waikato Wizards tonight in order for the Dream to finish fourth, and take on the Breeze in the semis.

The game was almost over before it began with the Breeze jumping the Dream to start the match. Brooke Blair, Jazzmyne Kailahi-Fulu, Ashleigh Kelman-Poto and Gabriella Fotu all shared around the points firing off eight straight in the opening two and a half minutes. It was not until the three-and-a-half minute mark when Auckland’s Casyn Buchman finally broke the drought, hitting a jumper then backing up with an impressive layup off a rebound and assist from Sharne Robati.

Unfortunately for the Dream, the fast start was not the only burst for the Breeze, who went on to score 12 of the next 14 points to end the term, starting with Blair’s second basket, as Blair (four), Zara Jillings (three) and Fotu (three) all were starting to capitalise. Robati was the only other scorer for the Dream, but a last second layup from Kelman-Poto had the quarter time margin at 20-6 in favour of the Breeze.

Blair was quick out of the blocks again in the third term with a jumper, extending the lead out to 16 before a drought-breaking layup from Buchman. Once again though the Breeze were in total control as Kelman-Poto and Bell both scored either side of Dream missed opportunities and the lead was out to 18. Arielle Williams-Mackey hit her first points off free throws midway through the term, but once again Blair was there with the talented shooter hitting double-figures already.

The teams traded baskets over the next few minutes but the Breeze held a commanding position, answering each challenge with one of their own. Jelena Vucinic managed to get busy in the term, but Kelman-Poto and Fotu were both in-form. By the time the half-time buzzer sounded, the Breeze were 17 points up, leading 35-18, but the Dream had stemmed the flow.

It would be the case for most of the second half with the Breeze having done enough to keep control, and both sides hit five points in the opening 90 seconds of the third term, with Williams-Mackey and Jillings both hitting long-range bombs with Kelman-Poto and Robati scoring either side of them. The Dream did have a sniff midway through the term as the 18-point deficit was cut back to just 10 after Amanda Wayment hit a jumper and Williams-Mackey and Katelin Noyer scored back-to-back triples.

Fotu was quick to arrest that momentum swing just 23 seconds later, and when Blair hit a three-pointer a couple of minutes later, the Breeze lead was back out to 14. Jillings and Fotu both continued to add to their totals despite the good term from Noyer, and a late free throw from Kelman-Poto meant the final break margin was the same as at the half, 52-35.

If there was any question of a comeback, Kelman-Poto and Blair soon put that to bed, hitting the first eight points of the quarter to blow the Breeze lead out to 25 points. To the Dream’s credit with the Breeze resting a number of players, they hit 14-straight points to come within 11, and four minutes on the clock. The Breeze steadied with important baskets from Kailahi-Fulu and Blair. Despite some late triples from Williams-Mackey and Buchman, it would only reduce the damage in the end, going down to the Breeze by 13 points, 72-59.

Harbour Breeze controlled most stats, shooting at a higher clip from the field (43 to 30 per cent) despite having two less attempts. They dominated the steals (8-4) and lead the assists (14-11) and rebounds (47-46), while the Dream had one less turnover (11-12) and actually scored more fast break points (13-9).

For the Dream, Robati had a day out with 15 points and nine rebounds, teaming up well with Buchman who had 15 points and seven rebounds herself. Williams-Mackey had the 13 points but shot just three of 12 from the field, including none of five from two-point range, also picking up two rebounds. Olivia Berry did not register a point, but she picked up 11 rebounds and three assists coming off the bench.

Harbour Breeze will now await the fourth placed semi-finalist who could be the Auckland Dream, or potentially Capital Swish if the Swish fall to the Wizards tonight.