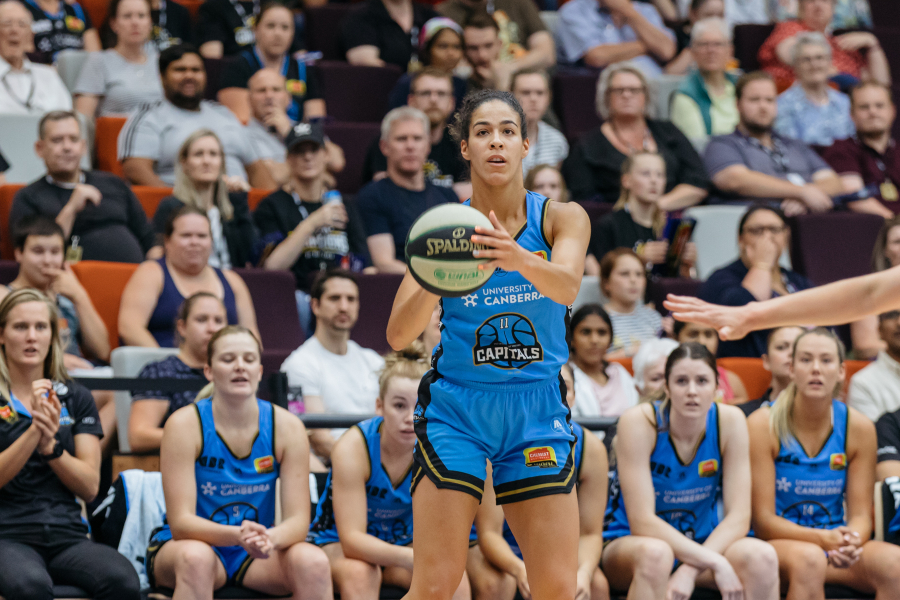 REIGNING premiers, the University of Canberra (UC) Capitals downed 2018/19 Women’s National Basketball League (WNBL) finalists, Perth Lynx at the National Convention Centre to move equal with Melbourne Boomers in second. While the points differential is still a large separator, the Capitals are back in contention for a top two spot after stringing three consecutive wins together.

The Round 12 match was played on Wednesday night after it was initially cancelled due to the terrible smoke conditions in the nation’s capital. It was decided that a mid-week match would be appropriate for it to be played, and the teams did battle in the first Wednesday night fixture of the year. Perth was already out of finals contention despite being in clear fifth spot on the ladder, four games adrift of Adelaide Lightning. The Capitals on the otherhand were a game clear of the Lightning in third, and just a game off the second placed Boomers heading into the clash.

UC was the strong favourite, holding an 7-1 record at home, only beaten by top-of-the-table Southside Flyers so far this season, while the Lynx were 2-5 on the road going into the match. By the time the first buzzer sounded at quarter time, the score was as many had predicted, in favour of the Capitals. The home side led by 10 points at the first break, but credit to the Lynx who refused to give up and clawed back to a single-digit deficit by the main break.

All that hard work to have narrowed the gap was undone in the third, as the Capitals got back on top, scoring 25 points to 14 to lead by 17 at the final break, and while the visitors were again able to take the honours in the final term, could only cut the final margin back to 14 points in a 75-89 loss. The Capitals were missing Keely Froling after facial injuries last week, but welcomed back a champion in Kelsey Griffin to the fold. Unsurprisingly for someone who had not played since December 15, Griffin’s minutes were managed, playing just over 20 minutes for the match after starting on the bench.

The Capitals could afford to ease Griffin back into the competition with Marianna Tolo and Kia Nurse continuing their ripping form of late. Tolo picked up 22 points and nine boards, while recording three assists and two blocks, displaying a nice shooting effort with 73.3 per cent from the field. Nurse sank 20 points at a less accurate 34.8 per cent, but also recorded five assists and three rebounds. French import, Olivia Epoupa continues to tease with almost triple doubles, with her season as good as any other player in the competition. She finished with 12 points, eight rebounds, eight assists, three steals and one block.

Meanwhile Maddison Rocci‘s form over the past two weeks has been terrific with more minutes, picking up another 17 points, four rebounds and five assists in a season-best performance. She backed up from her 19 points,  three rebounds and one assist last week and is averaging the second most points in the team – behind Nurse – over the two games. While Griffin did only have the managed minutes, she could not help but have an impact, picking up nine rebounds to go with her eight points, as well as three assists, two steals and three blocks. Once she is back fully fit, watch out.

For the Lynx, Marena Whittle recorded a team-high 18 points off the bench, while Katie-Rae Ebzery continued her terrific form this season with 16 points, three rebounds and four assists. Ariel Atkins had 13 points and six rebounds, as Lauren Mansfield also managed double-figure points with 10, and four assists. Maddison Allen had 10 rebounds in a prominent effort off the boards, while Nadeen Payne had seven points and seven rebounds in the loss.

The Lynx now have to back up with a Friday night game against Bendigo Spirit in Bendigo, while the Capitals have a break until Sunday where they clash with Sydney Uni Flames in a special Australia Day meeting.

Looking at the Draft Central (DC) Medal Leaderboard, there are three players who could theoretically take out the award, with Southside Flyers’ Mercedes Russell, Melbourne Boomers’ Cayla George and Adelaide Lightning’s Stephanie Talbot the three possibilities. Talbot is six votes behind Russell, but has three games remaining, though would need both Russell and George (four games clear of Talbot) to have a couple of quiet games to round out the season. Before her injury, Griffin was right up there with the leaders, but has not been on the court enough to make up the difference. Mathematically speaking, Adelaide’s Brianna Turner could also take out the medal in a shared circumstance, if she polls three best on courts, and Russell does not poll a vote (with George polling no more than two).