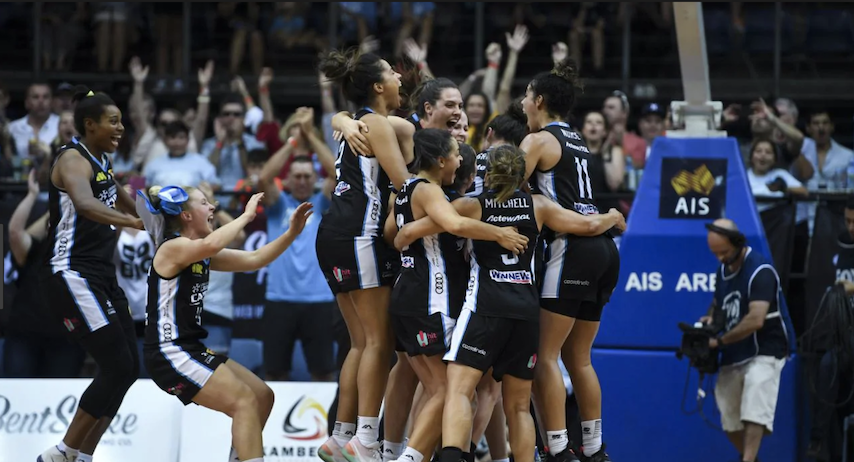 IN the third and deciding game, the University of Canberra (UC) Capitals were too strong for Adelaide Lightning to take out the 2018/19 Women’s National Basketball League (WNBL) premiership. Here’s how the third and final game went down:

The UC Capitals prevail in game three of the grand final series over Adelaide Lightning, securing their eighth WNBL championship. After forcing a decider with a buzzer beater in game two, Adelaide earned a chance to upset an away crowd in Canberra. Both teams shot well in the opening half as they entered the main break 49-45 – UC’s way. Come the third, UC showed no signs of slowing as Adelaide slipped to 17 points and then 11 in the final period. Capital’s captain, Kelsey Griffin, led from the front with 29-points, 15 rebounds, four assists and two blocks. Leilani Mitchell (19-points and six assists), Kelly Wilson (16-points, four rebounds and four assists) and Kia Nurse (12-points, five rebounds and three assists) were also important. For the Lightning, their starters mostly underwhelmed. Off the bench, Colleen Planeta scored a team-high 15-points with eight rebounds, closely followed by Aimie Clydesdale who scored 14. This concludes the WNBL season with the UC Capitals prevailing as champions over the Adelaide Lightning.

In case you missed the earlier two games…

In game two of the finals, Adelaide keep their chances alive with a last-ditch effort to win over UC by one-point. Adelaide scored consistently throughout the four periods, whereas UC had a dip in the third which made the closer a one-point game. The Capitals got off to a strong start, leading 23-19 at the first break, then extended their lead to seven by half-time. While many might have thought the favourites and minor premiers had one hand on the cup, the side that has refused to give in all season put in one last effort at home. The Lightning threw everything at the Capitals in the third term to restrict the visitors to just 12 points, while scoring 18 themselves and cut the deficit to just one point. A final term of 19-17 was enough for the Lightning to secure the win.

It was Adelaide’s Nicole Seekamp who sealed the win with a lay-up as time diminished. The guard led scoring for her side with 19-points, nine rebounds, five assists and two blocks. Her teammates, Nia Coffey, Lauren Nicholson and Kayla Alexander were also important. Coffey earned a double-double with 14-points and rebounds, Alexander earned one too with 12-points and 11 rebounds, while Nicholson had 14-points with seven rebounds and two assists. Though the most dominate player for the game was easily UC’s, Kelsey Griffin. The forward picked up 24-points with 23 rebounds across 29 minutes. Her teammates Kia Nurse and Leilani Mitchell also impressed, with Nurse earning 16-points with 10 rebounds and Mitchell with 13-points, six rebounds and nine assists.

For Adelaide, they relied on their two big scorers with Lauren Nicholson sinking 21 points to go with her four rebounds and one assist, while young gun, Nia Coffey starred with 15 points, 11 rebounds, one assist and three blocks.Kayla Alexander (seven points at 75 per cent scoring efficiency, and seven rebounds) and Sara Blicavs (seven points, three rebounds and two assists) were others who did their best for the Lightning but it would not be enough.