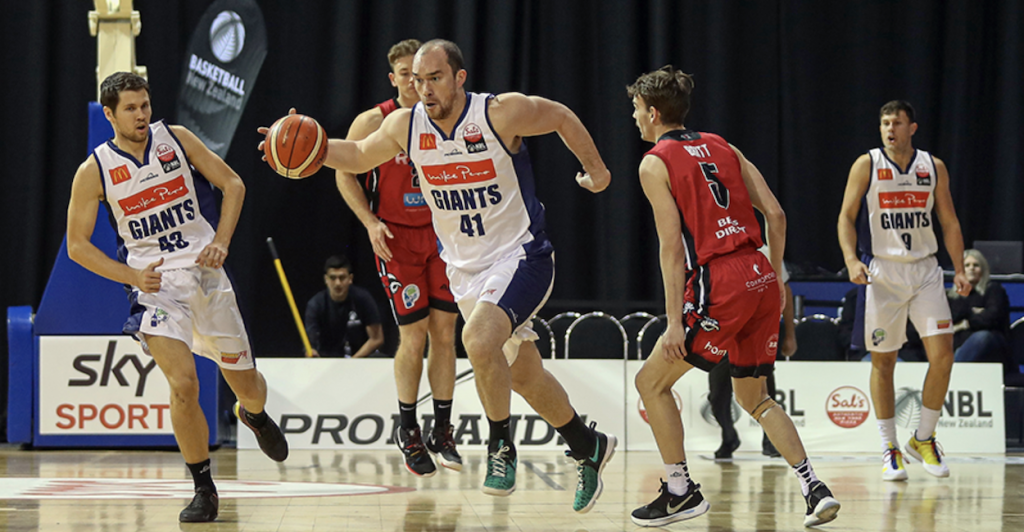 IN an unexpected turn, the bottom seed has upset the top seed, as the Nelson Giants earned their second win of the season, toppling the Canterbury Rams in yesterday night’s second game. The Giants produced the biggest quarter of the season by any side to pile on 39 points to 22, before going on to win in a tight one, 97-90.

The Giants achieved the feat despite missing their marquee draft pick in Mika Vukona further, due to testing for appendicitis. Replacing Vukona, 27-year-old Michael Karena made his presence known early getting his name in the scorers’ column within 60 seconds of the opening tip. The Giants would come out firing on all cylinders, converting four of their six opening attempts from the field. As a result, Nelson would cap off one of the season’s best starts across all seven teams, getting out to a 21-5 lead.

Shortly after Dane Brooks’ mid-range jumper with 12 seconds remaining, the Giants would be sitting pretty ten minutes into the game, accumulating 39 first quarter points and leading the Rams by a formidable 17. The main proponent of Nelson’s awesome start was Nicolas Trathen’s 10 points from eighty per cent shooting, where as a team, the Giants would shoot 17 of 23 from the field (73 per cent) and earning 22 of their 39 points in the paint.

While Quentin Bailey of the Rams struck first on a hook shot in the post to start the second, Canterbury would fight inside around the bucket to claw their way back into the contest. But, the Giants would counter every strike for the rest of the first half in a grinded out effort from both sides. However, the constant remained, as Karena continued to do his part in place of Vukona. Back to back to back buckets by Mason Whittaker and Thomas Webley would cut the Rams’ deficit to 17 (7-0 run), with 90 seconds remaining. Nevertheless, with Karena successfully adding two buckets to the score line, it would stop the Rams in their tracks, extending the Giants lead to 36-55 at the end of twenty minutes.

Despite the highlights being few and far between for the Rams in yesterday’s contest, Webley led his side at the end of three quarters in scoring with 11, as Canterbury would outscore the Giants 27-20 in the championship quarter. This was due to the Rams’ depth, as Canterbury’s bench accounted for 31 of their 63 points three quarters of the way through the match (a plus-15 compared to Nelson).

In what was a period of scoring streaks from both sides, it was Nelson who got off on the right foot first, scoring the initial five points of the home period. The Rams parried this with 10 points in a row of their own, which was quickly undone by another scoring run by the Rams.

In what seemed like a hopeless task, the Giants had an answer for anything that Mick Downer’s side would throw at them and despite the insurmountable odds, a Taylor Britt layup would set up for a somewhat close finish, as the Rams would get as close as seven points. But straight out of a timeout, a running hook shot by Tysxun Aiolupotea would put the result beyond doubt, as the Giants took one massive step to getting their season back on track. The Rams would go into the bonus with a minute to go, allowing Aiolupotea to cement the win for the Giants with free throws, polishing off Canterbury and doling out their second defeat of the season, with a final result of 90-97.

After the two teams settled their differences on the hardwood, it could be summarised as a shooting exhibition on the part of the Nelson Giants. Which, when coupled with their extraordinary start, became their game to lose before the halfway stage of the game, leading by as much as 24 points.

Remarkably, the Rams would come out victorious in virtually all the non-scoring categories, but when a team like the Giants shoots at a 54 per cent efficiency (40/73), good ball movement sometimes isn’t enough to get the job done.

Michael Karena certainly proved his mettle on the night, encompassing a complete game in almost all facets. Karena’s stat-line read 27 points, 11 rebounds and five assists, as he would take man of the match honours. Alongside Karena, Thomas Ingham’s 20 points was a major contributor to Nelson’s second win in five outings.

For the Rams, leading the team once again in points, Britt would finish with 21 next to five assists in a good night of facilitating the ball. Samuel Smith and Alexander Talma also made their performances noteworthy with 12 points each.

The Rams can redeem their winning form in Saturday’s contest with the Nuggets in a top four duel, whereas the Giants take on the newly appointed bottom of the table Auckland Huskies on Sunday.