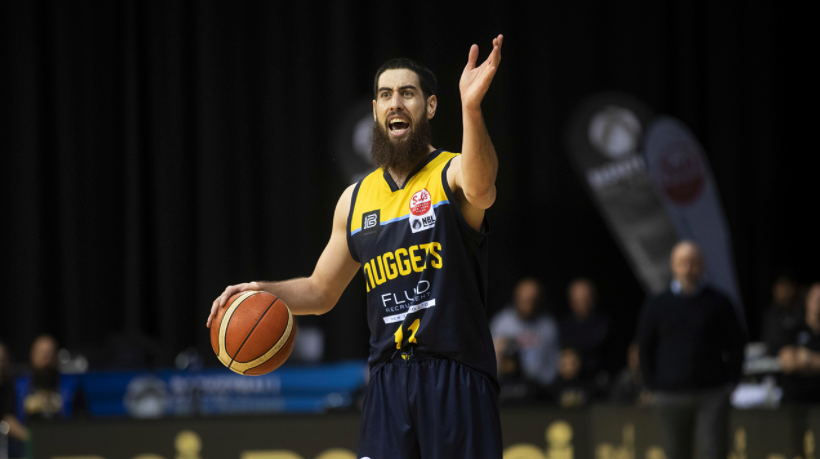 ANOTHER upset win for the Nelson Giants can be added to the books, as they came away with an impressive 23-point shellacking of the top of the table Otago Nuggets in last night’s 2020 Sal’s National Basketball League (NBL) middle game of the triple-header.

Knowing full well the outcome of last night’s result was to have no effect on each team’s positioning for next week’s Finals, the Nuggets were without starting big-man Jordan Hunt and stretch-four shooter Kane Keil. As a result, both Brent Matehaere and Mike Fitchett could tinker around with their sides before their games next week, despite it being a clash between first and second last. It also allowed both coaches to allow any players with “niggles” to gain much needed rest.

Even though young Kiwi big-man Akiva McBirney-Griffin got the starting nod from his side, Mike Karena quickly reminded him of the pecking order to begin the game, converting on a running hook. Nevertheless, Joshua Aitcheson knocked down a triple to get the ball rolling for the Nuggets. It was evident early on that each team went about scoring in totally different fashions. For the Giants, it was attacking the rim hard and getting up close and personal with Otago’s frontcourt, as 14 of their first 17 points came from inside the paint. For the Nuggets, they knocked down five shots from deep in their first ten attempts, signalling a more distant approach to getting on the scoreboard. The quarter time totals would reflect a slight advantage in favour of the Nuggets, who’s 28-21 lead came as a result of their bench’s contributions, outscoring Nelson’s 12-2 in the first 10 minutes. Eight points of which, came by way of Darcy Knox, along with Matthew Bardsley and Samuel Aruwa hitting a shot each.

To commence the second, Nelson slowly but surely began to crawl their way back taking the lead halfway through the quarter, thanks to a corner three from Thomas Ingham. But, both sides would remain within earshot of one another, dealing blows to back and forth for most of the remaining few minutes in the first half. Consecutive fast-break layups from Karena and a three-pointer from Tom Gargiulo handed Nelson a commanding nine-point lead heading into the main intermission after a 31-15 period, due mainly to instrumental rebounds, which in turn translated to a bunch of second chance points in the paint over the first two periods (14-4). Karena and Knox both led their teams in scoring at halftime, with the Giants’ center compiling 17 points in eleven and a half minutes of court time, before getting the second half started with an and-one.

A nice Euro-Step by Jordan Ngatai got the number one draft pick going after a rather quiet first half, making just one three in the initial 20 minutes of game time. With this being just one example of lacklustre performances through three quarters, Otago struggled to cut into the double-digit deficit that the Giants had created. An enormous dunk by Ngatai looked to spark an injection of energy into his side, as McBirney-Griffin repeated the action on the next play forcing Nelson to call a time-out.

The task of a fourth quarter comeback was made even harder for the Nuggets however, after a hook-shot once again from Karena extended Nelson’s lead to 16 with 30 seconds left in the third, as both teams went to the huddle one more time for the regular season with Nelson on top 74-58. Nicolas Trathen made Otago’s lofty deficit even greater to start the fourth, following a friendly roll from deep. And to make matters worse, Zeb Lovell’s up-and-under layup helped Nelson to their biggest lead of the contest (20). The Nuggets remained persistent in staying in the contest, but the fact of the matter was that Otago was undermanned and lacking size. And after Gargiulo was able to find the target for his second three with three minutes to go, Nelson could secure the upset result and obtain their fifth win of the year, taking home the triumph 97-74.

It was a one-sided affair down low in the paint, as the absences of Hunt and Keil factored majorly into the statistics. Nelson put their foot down with an impressive 52 points in the paint compared to Otago’s 30. While a number of bench players got remarkably more minutes due to the insignificance of the meeting, it remained a two-man effort through four quarters. A stat line of 26 points in 17 minutes, alongside three rebounds and three assists rounded out a dominant night around the rim for Karena, whereas Ingham was feeling his stroke to finish off the season with three threes to go next to his 17 points and six rebounds in another quality performance.

In what was a quiet night for both Jarrod Kenny and Ngatai, with both combining for 29 minutes of court time, the night belonged to the youngsters. Props went to Knox, who came off the bench to account for a team-high 17 points, meanwhile McBirney-Griffin and Richard Rodger each paved their own way with 13 points apiece.

The fates of both teams are already known for their first matchups of Finals Week, as the Nuggets who locked up top spot in standings go up against the Manawatu Jets in the qualifying final on Tuesday night. At the other end of the table, the Giants lock horns with the Canterbury Rams on Tuesday night as well, however, it will be a win or go home situation, as the teams engage in first elimination final of the postseason.