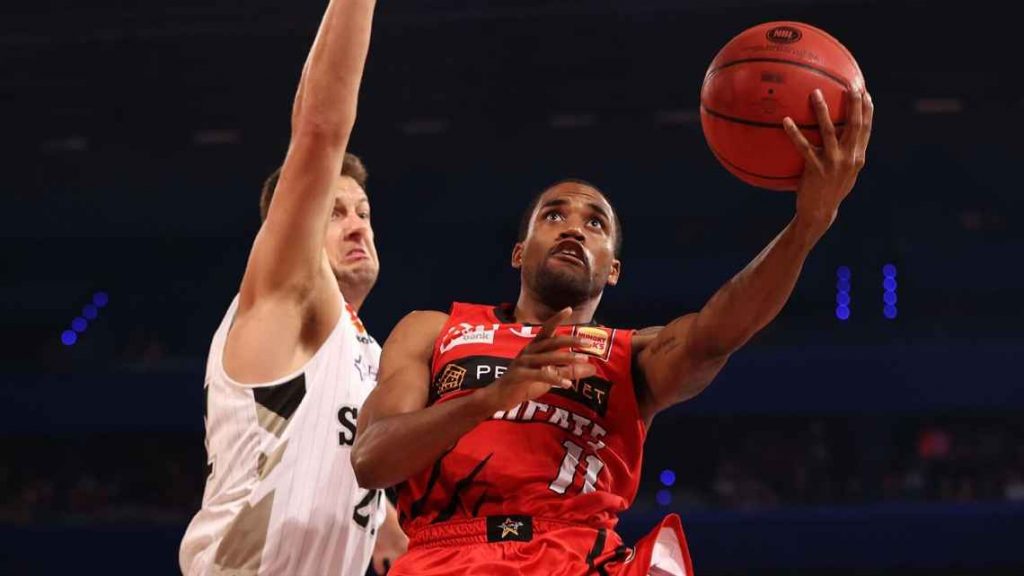 AN emphatic shooting display from Bryce Cotton kept the Adelaide 36ers at bay to win 92-82 and maintain their stronghold at the top of the National Basketball League (NBL) table after winning nine of their last 10 games. This matchup closed the round’s action out again after one of the more unusual outings saw Cotton explode similarly to propel a miraculous second-half fightback from Perth. Adelaide’s first half in that match proved they could match it with the best, but after losing Next Star Josh Giddey on Saturday with what is suspected to be a minor ankle injury, they were going to be tested for the full 40 minutes.

Playing just seven players more than five minutes in their other Round 10 game against South East Melbourne was not something 36ers coach Connor Henry would have the luxury of this time out, as he played 11 players in just the first quarter alone.

It did not affect his players as an evenly poised and efficient shooting performance saw the game tied at 24 heading into the first break. Perth took two minutes to register their first basket and it was 11 first-quarter points from Cotton that kept them in the game.

He maintained that level of output through the second quarter as his 23 first-half points helped the Wildcats to a 51-45 lead at the main break. Both teams were shooting better than 50 per cent, but it was Adelaide’s three more turnovers and seven more fouls which saw them trailing.

Adelaide’s third quarters have historically not been good, and Cotton looked to exploit that early with a heat check from deep that missed. They were on track to reverse this trend as Tony Crocker and Sunday Dech each knocked down three balls as the lead was cut to three.

More turnovers and efficient capitalisation from the ruthless Wildcats quickly put the lead out to double digits as Perth went into the final break up 73-65.

Brandon Paul had just eight points on four attempts to this point and it would require something special from him for Adelaide to get over the line, but he would miss his only shot for the quarter as he looked to facilitate more.

Dech and Keanu Pinder would foul out in consecutive possessions with more than seven minutes to play as foul trouble continued to plague the 36ers as it had all game. Technical fouls on Henry and Crocker gave up easy baskets from the charity stripe and it was an uphill slog from there.

Perth shot 22 of 27 from the line on the back of 26 fouls on Adelaide. The Wildcats conceded just eight free throw attempts for six makes as they remained much more disciplined defensively. Cotton was also fouled twice on three-point attempts which does happen often, but it was disheartening for the 36ers to give up easy points like that.

Adelaide shot 16 per cent better on the night for two more makes including an impressive 50 per cent from deep. The free throws and seven more committed turnovers contributed to their loss, but they allowed Perth to shoot 17 more shots from the floor with a staggering 23 to five offensive rebounding differential. This led to a 24 to seven second chance points difference.

Cotton ended the night with a sensational 36 points, two more than his last game against Adelaide, to go with six assists and two steals. John Mooney took a while to get going after being starved of opportunity early due to the Cotton show, but he managed to get to his double-double with 11 points and 14 rebounds. Mitch Norton (13 points, four assists) enjoyed a solid outing and said their last quarter performance was “pretty special”.

“First half, we wanted to tidy up a few things, I think we really did that in the second,” he said.

Daniel Johnson continued to perform in RAC Arena with 19 points and eight rebounds, as Crocker scored 13 points including three of five from deep. Jack McVeigh (12 points) reached double figures for the sixth straight game and with minutes being thrown around more than usual, Daniel Dillon managed 11 points.

The loss puts the 36ers out of playoffs contention, but they will be hoping to finish strong and reduce their in-game lapses to beat the Taipans on Sunday in their final game for the season.

The Wildcats face the Hawks on Friday for one of their two final-round fixtures and will look to remain in first place as they share the same amount of wins as Melbourne with a game up their sleeve.