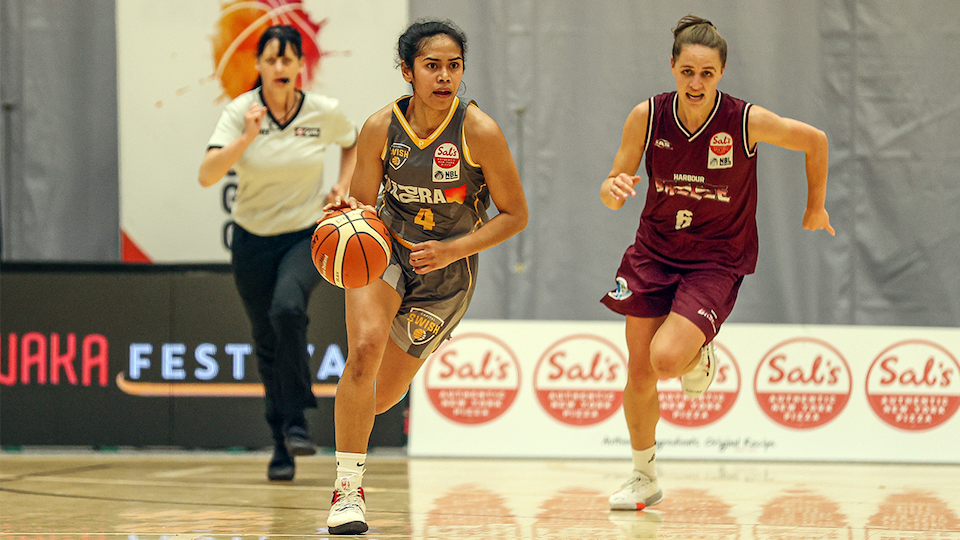 A DOMINANT 44-23 first half all but consolidated Harbour Breeze’s New Zealand National Basketball League (NZNBL) 18IN18 Grand Final spot, defeating Capital Swish in the first of two semi-finals. The Breeze won their sixth straight game, this time against the Swish 77-64, to advance through to the big dance, where they will await the winner of Waikato Wizards and Otago Gold Rush tomorrow.

Jazzmyne Kailahi-Fulu was the first on the board, getting to the basket and scoring a layup in the opening 20 seconds. It was soon matched by her opponent, Grace Simi Vaofusi not long after, and then Vaofusi doubled her score in response to a Brooke Blair basket. Then it all turned into a one-sided affair. Gabriella Fotu hit a jumper, and Ashleigh Kelman-Poto recored back-to-back baskets, and at one stage the Breeze were out to a seven-point lead after an 8-1 run.

The Swish clawed their way back to within three after back-to-back baskets from Te Huinga Selby-Rickett and Letava Whippy, but again the Breeze had the answers, with Kelman-Poto having a starring first term. Another 13-2 run in favour of the Breeze had the title favourites up by as much as 14, which ended up being the quarter time deficit, as both Sariah Penese and Keeley Tini hit both their free throws to end the term.

The news did not get any better for the Swish at the start of the second term as Zara Jillings nailed a three-pointer 90 seconds into the contest. Kelman-Poto continued her hot start and answered each Swish score with points of her own, and the Breeze kept the Swish at arms-length. At one stage Whippy had drawn the Swish back within 14 points, but the Breeze stepped up once again to score nine consecutive points and blow the margin out to 23. Luckily Lilly Taulelei and Whippy both scored in the final minute to add some respectability to the scoreboard, but a dying seconds layup from Fotu made the Breeze half-time lead 19 points.

The Swish needed a massive response to be any chance in the game, and they were quick out of the blocks in the second term as Selby-Rickett, Whippy, Paris Lokotui and Maia Jean Watene all scored to cut the deficit back to 11. Blair was quick to end the drought with a three-pointer, but the Swish were making a game of it. For the first time since the first term, the Swish were within single-digits thanks to a Penese triple midway through the quarter. The Breeze managed to steady in the second half of the term, with Olivia Bell‘s jumper in the final minute putting the advantage out to 11 points.

Bell was also the first scorer of the final term, but Whippy ensured the Swish were not going to go away, but the Breeze just had all the answers. Able to keep in touch with them, the Swish traded blows from long-range with Vaofusi hitting a three-point jump shot in between Tini’s triples, and in the final few minutes, the Breeze were doing enough to hold off the Swish. Each basket had a response and despite Whippy, Vaofusi and Selby-Rickett’s best efforts late in the game, the likes of Tini and Bell were standing up well coming off the bench. When the final buzzer sounded, the margin was 13 points with the Breeze getting up. 77-64.

It was the playmaking efforts of the Breeze that was the difference, picking up 21 assists to 14, and scoring 25 points from turnovers. The bench also stood tall with 25 points to 12, and shot at 51 per cent from inside the arc compared to the Swish’s 37 per cent. The Swish did have a number of wins in the stats, leading the rebounds (44-40), steals (16-15) and second chance points (19-10).

Kelman-Poto led the way for the Breeze by putting up 16 points, seven rebounds, three assists, three steals and two blocks in an all-round solid game. Fotu (12 points, six assists, three steals and two rebounds) and Jillings (12 points, four rebounds, four steals and two assists) both had sustained impact, while Tini made the most of her minutes, picking up 15 points in as many minutes, also collecting six boards in the process. Brooke Blair finished with a quieter six points, but still had four rebounds and five assists in the win.

For the Swish, Whippy was the star, racking up a double-double of 17 points and 12 rebounds, as well as six assists and five steals in a clear best-on performance. Lokotui was also strong with 14 points, seven rebounds and three steals, while Selby-Rickett had eight points, six rebounds and two steals. Vaofusi recored the 11 points, four rebounds, two assists and two steals, but it would not be enough.

The loss ends the Swish’s season, while the Breeze have a day off to find out their opponent for the NZNBL 18IN18 Grand Final.