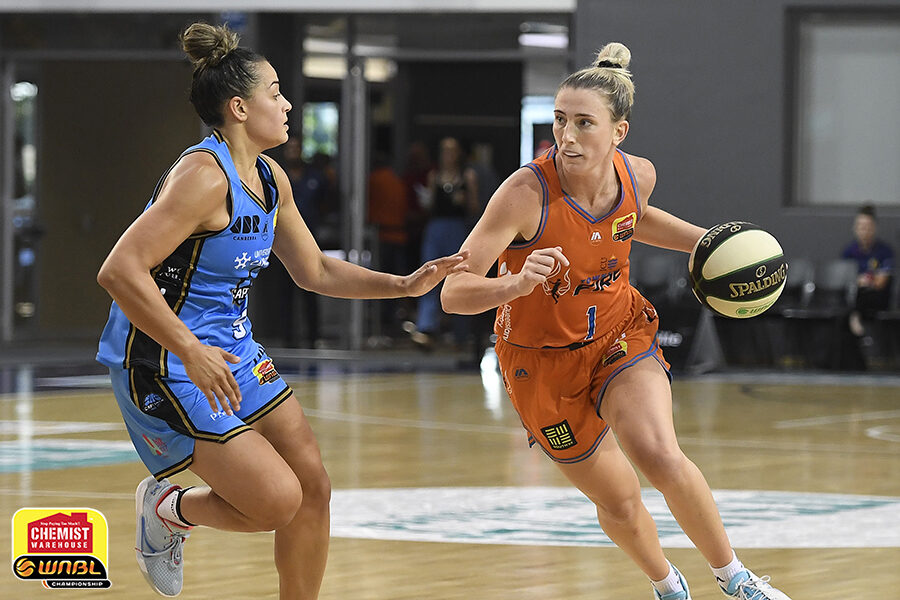 TOWNSVILLE Fire caused a major upset in the WNBL, claiming a 13-point win over UC Capitals in a seesawing affair (84-71). The win marks the Fire’s seventh of the season and keeps them in touch with the top four while it is the second loss in as many days for the Capitals. It has not altered their ladder position too much though, thanks to their strong hold on second place.

Fire skipped out to a strong start and really put the foot down in the second term with a dominant showing thanks to their 24 points to 11. They managed to shut down the typically all-powerful Capitals side before things started to even up in the second half. Managing 19 points apiece in the third quarter, the Capitals came out with a real fire in the belly in the last quarter mounting somewhat of a comeback to outscore Townsville and spark plenty of concern through the Fire camp, but it was not enough to overrun the home side which had created a decent lead and were not ready to give up the “W”.

It was a hard day at the office for the Caps with the Canberra-based side unable to find the basket, sitting at a mere 28 per cent from the field only converting 22 of their 76 chances. On the flip-side, Townsville had a much better day sitting at 48 per cent and impressed from inside the arc nailing 21 of their 37 attempts at 56 per cent compared to 31 per cent. Free throw percentage was another point of difference with the Fire capitalising on their chances at the charity stripe with 75 per cent to 70 per cent. Despite struggling on the scoreboard, the Caps starred off the backboard amassing 49 compared to 35 while they also notched up 15 assists to nine. When it came to turnovers the Fire were much cleaner with ball in hand registering 12 while they also flexed their muscles when it came to points inside the paint with 30-24.

Youngster Shyla Heal seemed to have the ball on a string unable to do no wrong, racking up a game-high 27 points shooting at 58 per cent along with eight rebounds and three assists. Lauren Nicholson was the next best with the guard inflicting plenty of pain on the scoreboard with 25 points to her name and five rebounds, four of which were defensive. Nadeen Payne was the only other player to register double digits for points with 11 while also amassing eight rebounds in her 28 minutes on court. Youngster Zitina Aokuso was down on her usual performance but still managed to record seven points, three rebounds and one assist.

Although the big stars did not step up to the plate it was Maddison Rocci that led the way for the Caps recording 19 points at 43 per cent. Rocci slotted five triples in her outing while also amassing three rebounds, one assist and two steals. Kelsey Griffin had an influence with her 10 points and seven rebounds in 20 minutes on court as Mikaela Ruef chimed in with nine points and an impressive 12 rebounds. Keely Froling also hit the scoreboard albeit not in a big way, with her eight points and seven rebounds – six of which were offensive.

The Capitals next look to Perth in hope to secure their ninth win while Townsville next face Adelaide Lightning.

PERTH Lynx clinched a two-point victory over Adelaide Lightning in a tight contest on Sunday night with the two sides going toe-to-toe for majority of the game (78-80). The victory marked the third straight win for the Lynx who have found some solid form in the back half of the season while Adelaide have faltered in the past couple of outings, with four straight losses.

Adelaide burst out of the blocks with a scintillating start to the game showcasing their dominance and scoring prowess early piling on 28 points to 19. The tables turned in the second quarter with Perth firing back to go on a 26 point to 13 spree and somewhat level the playing field. It was tit for tat for most of the game as the two sides traded blows, with the Lightning rediscovering their form in the third to reclaim the ascendancy and grab a hold of the game. But when it came down to the final quarter Lynx left no stone unturned firing on all cylinders and outscoring the Lightning in the final term to secure an almighty win.

Despite having a lower shooting percentage from the field 33 to 40 it did not stop Perth from stealing the win. Adelaide impressed from two-point range sitting at 41 per cent sinking 16 of their 39 attempts while Perth struggled to find the basket sitting at a mere 28 per cent with 17 from 60. Lynx had the upper hand from range sitting at 46 per cent while Adelaide managed 40 per cent. Rebounding was another strength of Perth (58-44) while when it came to assists the Lightning notched up 23 to 20 and also came out on top in blocks (4-2) and steals (5-4).

The scoring was shared between a number of key players for the Lynx but it was young gun Darcee Garbin that led the pack with her impressive 31 points and 11 rebounds in a double-double performance. Garbin was involved in just about everything and was well aided by teammate Alex Ciabattoni who slotted 15 points in her 30 minutes on court while also registering seven rebounds and three assists. The ever reliable Katie Ebzery stepped up to the plate with her 12 points and 10 assists in another strong showing while Kayla Steidl also managed to find the scoreboard with relative ease picking up 11 points and 11 rebounds to help her side get over the line.

There were only two main scoring options for the Lightning with star Steph Talbot dominating once again. Talbot managed a game-high 23 points to accompany her 13 rebounds and seven assists although it was not enough to get her side over the line. Chelsea Brook plied her trade with 16 points, five rebounds and three assists in her 37 minutes on court despite her shooting percentage being a mere 50 per cent. Abigail Wehrung chimed in with a handy eight points, seven assists and two rebounds while Alex Wilson also managed to hit the scoreboard with her eight points.

It is a short turnaround between games for Adelaide with the side facing off with the third placed Melbourne Boomers while Perth also play on Tuesday against the lowly placed Sydney Uni Flames.