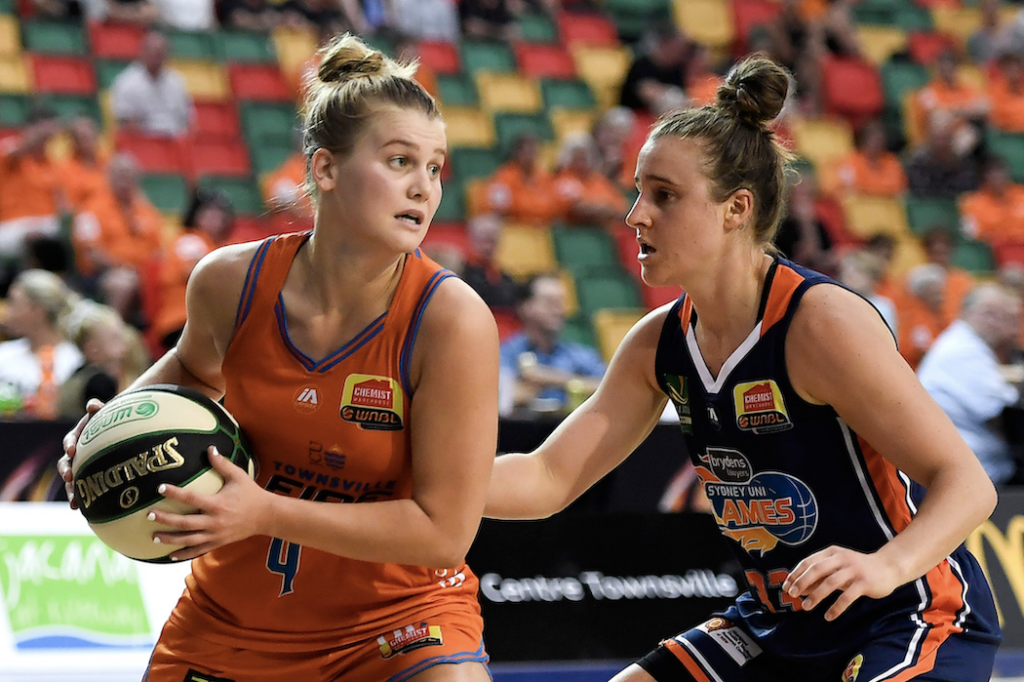 AFTER a regrettable loss to the UC Capitals two days ago, the Townsville Fire have repositioned themselves in the winner’s column again, after a scrappy 81-78 win in their home opener last night against the Sydney Uni Flames.

Despite a late charge from the Flames, “The Battle of the Inferno” was at a high temperature in all four quarters, but it was a younger and quicker Fire outfit that came out triumphant.

The Fire were without their anchor in Zitina Aokuso to start their game as Megan McKay filled the role alongside Mia Murray, Nadeen Payne, Shyla Heal and Lauren Nicholson. Meanwhile, the Flames had their usual five on the floor for tip-off in Lauren Mansfield, Alison Schwagmeyer, Anneli Maley, Nat Burton and Lauren Scherf.

It was Heal that got Townsville off the ground with five of the Fire’s first 10 points, whereas Sydney Uni’s spread of scoring options took over their offensive production for the majority of the first quarter with multiple names getting on the scoresheet early on.

But the Fire’s core unit with the help of Stephanie Reid and Courtney Woods would take control of the contest in the later stages of the first term, getting their lead out to double-digits seven minutes in thanks primarily to Payne’s potency from deep.

Capitalising on all five of their first-quarter free-throws and 12 points in the paint compared to the Flames’ eight, the Fire etched a 26-19 lead at the first intermission, 11 of those coming by way of Payne in a quarter where she would not see the bench.

Carly Boag made the first move of the second with a pull-up three to quickly cut the deficit to four, as Coach Katrina Hibbert looked to hit Townsville where it hurt from behind the arc. Halfway through, the Flames drew level at 32 points apiece, but Woods and Reid played pivotal roles in the first half knocking down much needed triples to maintain the side’s lead, while Scherf continued to dominate down low with 13 points through the first 20 minutes of play.

Heal continued to lead the way for Shannon Seebohm’s squad with 13 points of her own in the first half with Payne backing her up with 11 points, putting Townsville up 47-43 at the main break, as the squad shot an incredible 56 per cent conversion rate with bench players accounting for 15 points in this time.

Starting off the second half, both sides would get some shots off successfully in a very even third quarter. However, Sydney Uni slowly worked their way in the contest again after a momentary lapse to conclude the first half. A few buckets by Scherf tied up the contest five minutes into the third phase and a single free-throw from Maley gave the Flames their first lead of the night since the opening period, which would only last until the next possession.

Nevertheless, the see-sawing affair continued in the penultimate quarter, concluding with the score 63-59 in what was preparing for a hotly contested final 10 minutes between two talented sides.

Seven-straight points by way of the two surprises of the night in Woods and Reid, put Townsville ahead by 11 in an instant, thus putting the Fire in the driver’s seat in front of a raucous home fan base with six minutes remaining.

A three from Scherf halfway through the fourth put a glimmer of hope in Sydney Uni’s eyes and a late barrage from the Flames would soon follow, getting to within one point in the dying seconds. But Heal’s two made free throws with a few seconds remaining would ice the game and cement Townsville’s victory last night, 81-78.

Statistical leaders for the victors included Nicholson, who off the back of a strong second half completed her game with 17 points and three rebounds, while her backcourt companion Heal would accumulate 15 points and six assists. Payne (14), Reid (11) and Woods (10) each contributed double digit totals to the Fire’s scoring.

On the flip side, Scherf’s season-high 25-point, nine-rebound performance coupled with Schwagmeyer’s 23-point effort allowed the Flames to stay in the contest, while Maley’s 10 points and 14 rebounds continued her individual season as one of the WNBL’s most prolific board getters.

The Fire bounced back from their close loss to the Canberra Capitals in their last outing, but now have a mammoth challenge awaiting them in two days, the Southside Flyers. The Flames, who were originally set to face the Adelaide Lightning that same night, now get an extended four-day rest before lining up against the Caps on Saturday night.