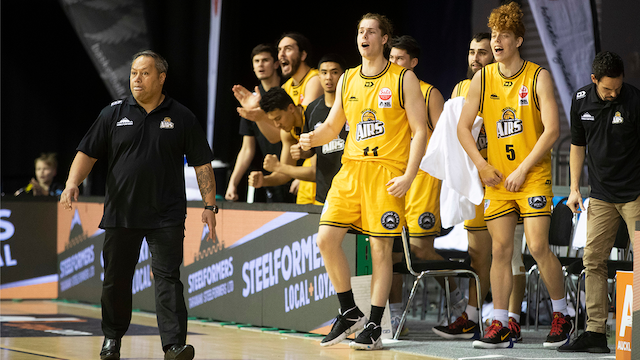 HIGH-octane offence combatted stringent defence, as Taranaki Mountainairs came out on top of the Otago Nuggets, 106-105 in one of the games of the 2020 Sal’s National Basketball League (NBL) Showdown. For much of the game, both teams took care of the ball, but it was Taranaki that took home the win despite a fierce second half comeback from the Nuggets.

The opening night of week four action rounded out with what was promised to be the game of the season so far between the first-placed Taranaki Mountainairs and the third-placed Otago Nuggets. It is fair to say that fans were made good on that promise, and then some.

The promise of plenty of offence was certainly delivered with 53 points being scored in the first quarter. The Nuggets won possession off the tip which resulted in a missed dunk opportunity for Jordan Hunt, one of many shots missed at the rim for Otago. Marcel Jones opened the scoring for the game with a silky post-hook, as the reply came straightaway from Josh Aitcheson with the corner three.

Jones would continue to show why he is one of the best players in the league as he was stealing defensively, facilitating the offence with multiple assists, and banking in threes, it all seemed to be going his way early. His activity was contagious for his team as Taranaki was doing it on both ends.

With the starters beginning to have a break, it was the unlikely performances of bench players Denhym Brooke of the Airs and Matthew Bardsley of the Nuggets who would turn super subs for the quarter. Brooke would go five for five from the floor and end the quarter with 12 points, while Bardsley would drop eight, keeping the Nuggets in the game.

A Francis Mulvihill splash would intervene his efforts as the lead extended to double digits for the Airs. Jordan Ngatai’s only three points for the half would close out the quarter to end 32-21. An evenly poised contest with offence the clear difference. Taranaki was shooting 60 per cent and had twice as many assists than Otago for the quarter as its static offence needed to get moving as the game progressed.

A Jarrod Kenny splash started the second quarter and set the tone for he and the Nuggets as they outworked the Airs early. Kenny looked to score aggressively inside and out and another triple from him prompted a reply from MVP race leader Derone Raukawa, who earned three points the old fashioned way.

To typify a slow scoring night, a Ngatai air ball preceded a big Brooke put back and-one from the weak side, while the offensive explosion began to settle as both teams started to sort themselves out defensively.

Though the Nuggets made in-roads to the early deficit they gave up, another Mulvihill splash pushed the lead out to 12. Backup forwards in Brooke and Zachary Easthope supported Jones and Tai Wynyard, however, it would be Mitchell Dance that would take over, scoring six down the stretch.

Despite new inclusion Aaron Roydhouse knocking down his first shot in the competition from downtown, the Airs would maintain their first quarter lead heading into half-time up 61-49. Though they only shot 10 per cent less from the field, some inconsistent defence from the Nuggets allowed 29 bench points and 38 points in the paint for Airs. Brooke (15 points) and Jones (11 points, six rebounds, five assists) were important for the Airs while Hunt (11 points) led the way for the Nuggets.

Kane Keil opened the second half with a big triple in a quarter that would see him score eight. Hunt’s physicality inside would lead to a couple of baskets as the lead was suddenly back down to five. Much like the start of the second quarter, a renewed energy surge struck the Nuggets, but they were still unable to string that big run together that would see them within a possession of the Airs.

Ngatai forced his way back into the game late in the quarter with a smooth spinning layup and a three-point play, however, Raukawa going coast to coast and a Shane Temara dunk kept the scores at 83-76 heading into the last break. You still could not help but feel the momentum was with the Nuggets as it seemed the Airs starters were starting to fatigue.

The final 10 minutes were some of the most exciting basketball the competition has seen so far. Some big blows either way held the margin until the Nuggets stars in Ngatai and Kenny took control, while Bardsley was so vital down the stretch with his athleticism and hustle all over the court.

Kenny found his way to the line multiple times, but it was free-throws from Hunt that tied the game at 98-apiece with just over two minutes left to play. It was the first time the scores were level since the score line read 0-0.

A go-ahead basket from Kenny was answered with the double-double machine Jones hitting a jumper to tie, as he went back to back with a pretty floater to give the Airs the lead with one minute to play. As he had done all game, Keil came up clutch with a much-needed triple before some Kenneth Tuffin free throws changed the lead again.

With thirty seconds left, who else was going to step up? That’s right, the super subs of the first half decided to end the flurry they began with Bardsley laying it in, and Brooke doing the same to make the game 106-105.

The Nuggets had no timeouts left and went to their star player Ngatai who had some scoring left in him. His baseline teardrop narrowly missed as time ran out on the loose ball, handing the Airs the narrow but well-deserved victory in a thriller.

Jones (26 points, 12 rebounds, seven assists, three steals) and Raukawa (22 points, seven assists, 9/9 free-throws) put up another good performance as Brooke (17 points, seven rebounds) played big minutes off the bench. Temara’s (14 points, 12 rebounds) effort flew under the radar as Taranaki sit two games clear on top of the ladder. They face Auckland on Thursday and will be looking to continue their high-scoring winning ways.