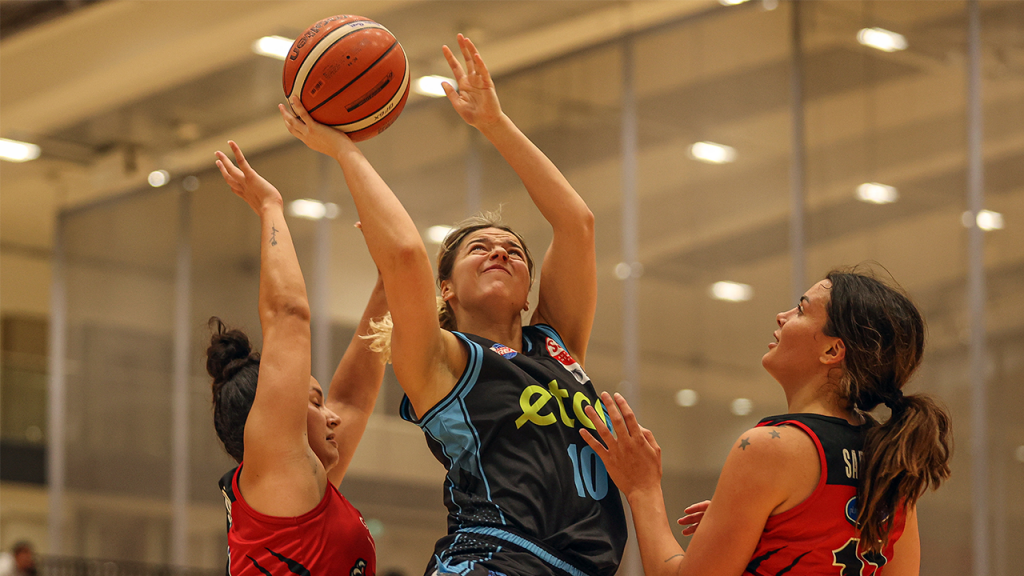 AUCKLAND Dream have built on the momentum of their dying seconds winner against Waikato Wizards to secure a more comfortable victory over Canterbury Wildcats only 24 hours later. The New Zealand National Basketball League (NZNBL) 18IN18 tournament has gone exactly to plan thus far for the Dream, who have won their first two games of five in the condensed competition, earning a hard earned rest. Starting strong to lead by 13 points at half-time, they were able to maintain the age and get up by 15 in a thrilling contest.

The Wildcats were the first team on the board in the match, with Terai-Ma-Teata Elia dropping both free throws in the opening minute. That was soon countered by a red-hot Casyn Buchman who hit a triple, grabbed a defensive board off a Rosalia Samia long-range attempt, then made another two-pointer to grab her team the early lead. It set the tone for the Dream’s intensity as game one winner, Arielle Mackey-Williams got on the board, as did the Wildcats’ Brittany Richards for a high-scoring opening few minutes.

Leading by just a point four minutes in, the Dream started to take control and notched up back-to-back layups from Olivia Berry and Amanda Wayment, before a crucial Gemma Etheredge jumper reduced the deficit to four with just under two minutes left. Six seconds later, Jelena Vucinic drilled a triple off a Buchman assist, and despite both teams having chances, the margin was seven at the first break with the Dream ahead, 15-8.

The Dream certainly had the momentum heading into the second term, and Sharne Robati was quick on the trigger to grab four points in the opening 80 seconds, as Shea Crotty, Richards and Samia had multiple chances from long-range but could not get it happening despite consecutive boards. Wayment soon grabbed one and Robarti had scored the first six points for her side in the term, with only a Richards basket in between. For all the attacking nature of the Wildcats, it was Wayment who extended the lead out to 13 after two and a half minutes.

The high-scoring opening few minutes slowed a little as both teams had settled down defensively in the term, but for everything the Wildcats threw at the Dream, the in-form side had the answers. An Ekka basket was matched by Robati, and then a Wayment jump shot and Rionne Papa free-throw extended the lead out to 15. Etheredge quickly replied by Williams-Mackey went to work building towards another big performance with five consecutive points and handing her side an 18-point lead. The Wildcats had all the scoring in the final two minutes of the term thanks to a Katherine Jones triple and two success Etheredge free throws, but they still trailed by 13 points.

The Wildcats needed a spark in the second half and Richards and Elia were quick on the board, but back-to-back triples by Robati and Buchman either side of a Samia layup drove the dagger further in. Every challenge by Canterbury was suitably answered, with Etheredge becoming a problem close to the basket, but the likes of Robati and Vucinic standing up, with Buchman creating on offence. The Wildcats could not seem to get a crucial jump shot, instead Etheredge kept getting to the line and making the most of it.

Unfortunately for Canterbury, they could only get within 13 points, as the pairing of Williams-Mackey and Waynment were back on after a rest in the last couple of minutes and having an immediate impact. Jones put the deficit to within 14 with a minute to play, but a late Williams-Mackey basket extended it out to 16 at the final break.

Wayment was first on the board in the final term to all but end the contest. Emily Knight got her first points of the game for the Wildcats, as her second basket drove her team to within 12 points for the first time in two quarters. When Etheredge made a jump shot with 97 seconds left in the match, the deficit was still a tough ask, and then Mackey-Williams decided that was enough of that, draining back-to-back triples to put the final nail in the coffin. Despite Etheredge’s best work – sinking a triple in response, Wayment’s last basket in the final 30 seconds secured the 66-51 victory.

The Dream were once again the more efficient team on offence, shooting at 42 per cent compared to 26 from the field, and the Wildcats drained just three of 26 triples, compared to the Dream six of 15, showing their determination to look to secure baskets from close range. The rebound count was even, with the Wildcats ahead, as well as making the most of 19 second chance points thanks to their healthy work off the offensive boards. The Dream led the assist count (15-9), as well as the steals (14-13), blocks (2-0) and crucially, had four less turnover s (19-23).

Mackey-Williams backed up her game-winning performance on night one with a match-high 19 points, as well as five rebounds, one assist and two steals. Robarti had 14 points, five rebounds and two assists, while the best player coming off the bench was clearly Wayment, who had 13 points and 13 rebounds – including a massive eight offensive – to go with three assists and two blocks. Buchman played a crucial role with seven rebounds and four assists to go with her eight points.

For the Wildcats, Etheredge was by far the best player, dropping team-highs in points (17) and rebounds (12), particularly damaging off the offensive boards with nine. She also got to the free-throw line for 10 chances, making eight of them, and had three assists and two steals. Elia was the other double-digit scorer with 10 points, six rebounds, two assists and three steals, while Samia (five points, five rebounds and three steals) and Jones (six points, six rebounds) also tried hard across the board.

Now the Wildcats look to bounce back against Capital Swish tonight, while Auckland Dream earn a week’s break before also taking on the Swish next Friday, November 27.