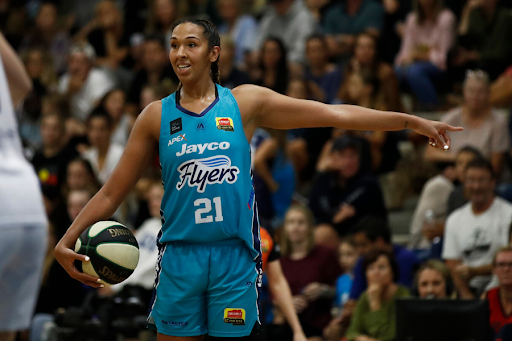 WITH no basketball on for the foreseeable future due to the COVID-19 pandemic, we look at the brighter side of the sport that brought plenty of memories throughout the 2019/20 Women’s National Basketball League (WNBL) season. Over the next couple of weeks we will countdown Draft Central‘s Top 10 memorable moments from the season. Some are individual events, others are season views, and even a couple are decisions that panned out for the better. Today we continue with number eight, looking at the star import from season 2019/20 who dominated for the Southside Flyers.

Each year WNBL clubs try and spot a diamond from overseas and very few get it wrong when turning their attention to the WNBA in particular. As has been the case with the University of Canberra (UC) Capitals’ Kia Nurse, Mercedes Russell proved to be a huge hit for the Southside Flyers, playing through the center position and having ridiculous amounts of rebounds game-in, game-out as well as plenty of points, picking up double doubles galore throughout the 2019/20 season. She did not hit a three-pointer during the season, but her work up close was better than most, averaging 56 per cent from two-point range.

At 198cm, Russell towered against most of her opponents, putting up numbers of 16.7 points, 9.7 rebounds, 1.8 assists, 1.2 steals and 1.0 block per game. She could still improve her shooting from the line (65.9 per cent), but her dominance off the boards made her a damaging threat to any opposition. Her reward for effort saw her named the Robyn Maher Defensive Player of the Year. She teamed up well with fellow big, Marianna Tolo for the Flyers, and was also named in the WNBL All-Star Second Team with another teammate, Rebecca Cole. The 24-year-old will head back to the Seattle Storm where she was a member of the WNBA Championship side.