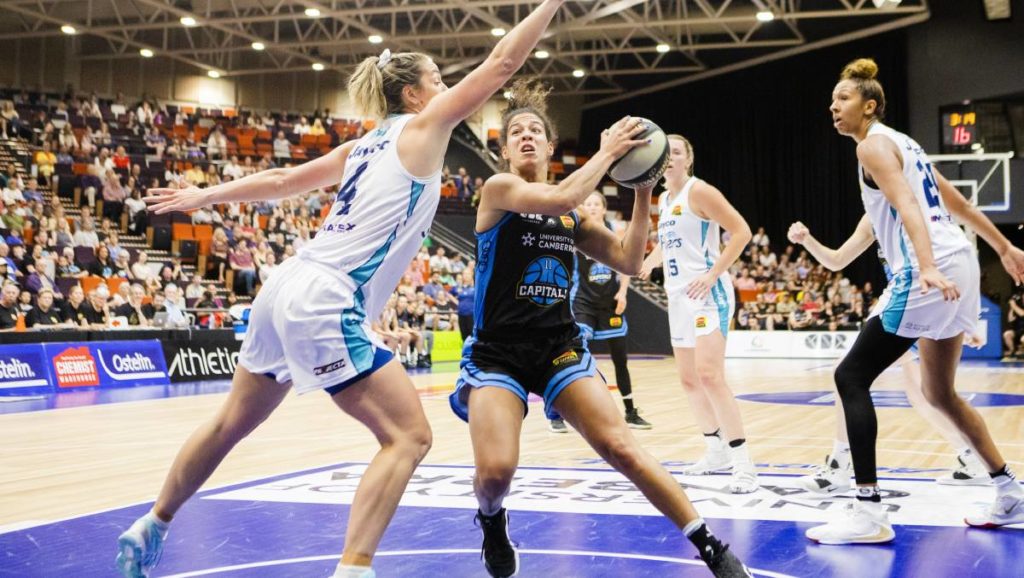 WITH no basketball on for the foreseeable future due to the COVID-19 pandemic, we look at the brighter side of the sport that brought plenty of memories throughout the 2019/20 Women’s National Basketball League (WNBL) season. Over the next couple of weeks we will countdown Draft Central‘s Top 10 memorable moments from the season. Some are individual events, others are season views, and even a couple are decisions that panned out for the better. Today we continue with number five, which looks at the only dint in the University of Canberra (UC) Capitals’ armour at home – Southside Flyers’ win on the road.

After copping a disappointing loss to the Capitals earlier in the season at their home court where they went down by 19 points, the Flyers were primed for the next encounter between the pair. At the stage of the first loss, the Flyers were living up to their name and flying, while the Capitals had made a shaky start, thumped by Melbourne Boomers in Geelong and then losing to last year’s wooden spooners, Sydney Uni Flames a couple of days later. Coming into the round, the Capitals had smashed Bendigo Spirit by 25 points on the road, and the Flyers had got up in a seven-point thriller over Melbourne back in Round 8. Already in Round 9, Southside had downed Townsville by 19 points and would fly up to Canberra the next day to face the Capitals who were fresh and raring to go.

Instead, it was the Flyers who started the stronger of the teams, leading by three points at quarter time courtesy of a 22-19 opening term. UC hit right back in the second quarter pleasing the Capitals’ fans to regain the lead by a point, then extended it out to three by the final break. A remarkable final term saw the Flyers put the foot on the gas and accelerate away with a 23-15 last quarter that home fans in Canberra would have otherwise not witnessed or would witness for the remainder of the season. In what would be the only Capitals’ home loss of the season, the score read 70-65 in favour of the visiting team. It was just that kind of day for the Flyers, with Rebecca Cole leading the points-scorers with 21, as well as three rebounds and two steals, well aided by the work of Mercedes Russell (17 points, 10 rebounds, two assists and two blocks) and former Capitals talent, Leilani Mitchell (15 points, seven rebounds and two assists).

Most of the Capitals stars were down on their output with 2018/19 Most Valuable Player (MVP) Kelsey Griffin scoring just four points, shooting at 16.7 per cent from the field, though she did pick up 12 defensive rebounds and a couple of steals. It would be revealed later that Griffin put in a monumental effort to finish the game, suffering an ankle injury in the last term but remaining out there in a bid to try and get her side over the line. She would miss six weeks through the injury. But aside from Griffin, 2019/20 MVP Kia Nurse was also down on her production, recording just 13 points at 22.7 per cent efficiency from the field, while Marianna Tolo‘s 16 points was the highest from her side, also picking up six rebounds and two assists in the loss. Olivia Epoupa was the pick of the home side with a spirited 11 points, eight rebounds, seven assists and four steals. While the result ultimately meant little in the scheme of the season – with the Capitals going back-to-back – it was certainly a moment to savour for the league’s newest franchise.