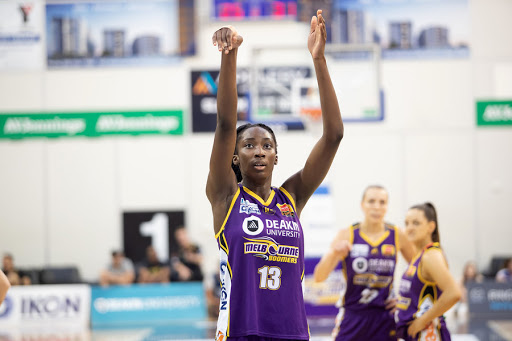 WITH no basketball on for the foreseeable future due to the COVID-19 pandemic, we look at the brighter side of the sport that brought plenty of memories throughout the 2019/20 Women’s National Basketball League (WNBL) season. Over the next couple of weeks we will countdown Draft Central‘s Top 10 memorable moments from the season. Some are individual events, others are season views, and even a couple are decisions that panned out for the better. Today we begin with number 10, a young star who continues to shine brightly on the national stage.

Formerly the Rookie of the Year Award, 20-year-old Ezi Magbegor took home her second rookie award after triumphing in the 2017/18 season when playing for the University of Canberra (UC) Capitals and now she has taken out the award in Melbourne Boomers’ colours. Building on from her successful year with the Geelong Supercats in the NBL1 where she averaged 18.6 points, 6.6 rebounds, 1.8 assists, 1.7 steals an 1.6 blocks per game and made the NBL1 All-Star Five, Magbegor took her game to another level again at national level. In 23 games, Magbegor put up numbers of 13.2 points, 6.6 rebounds, 1.5 assists and 1.1 blocks per game for the Boomers, shooting at greater than 50 per cent from the field, as well as 78 per cent from the free-throw line. While not a known three-point shooter, the 193cm forward-center still recorded five makes from 11 attempts. Despite her season, Magbegor just missed out on being named in the WNBL All-Star First and Second teams, mainly due to the fact the likes of fellow bigs, Mercedes Russell and Cayla George putting out tremendous years.

Magbegor was initially eyeing off representing the 2020 Olympics and joining her WNBA side, Seattle Storm for the 2020/21 season. No doubt many will hope that it is not the last time Magbegor runs out in the WNBL, but her future is bright and even with likely delays to those events – the Olympics is set to be pushed back to 2021 – no doubt the power forward-center will be a feature of the title-contending Storm team for years to come.