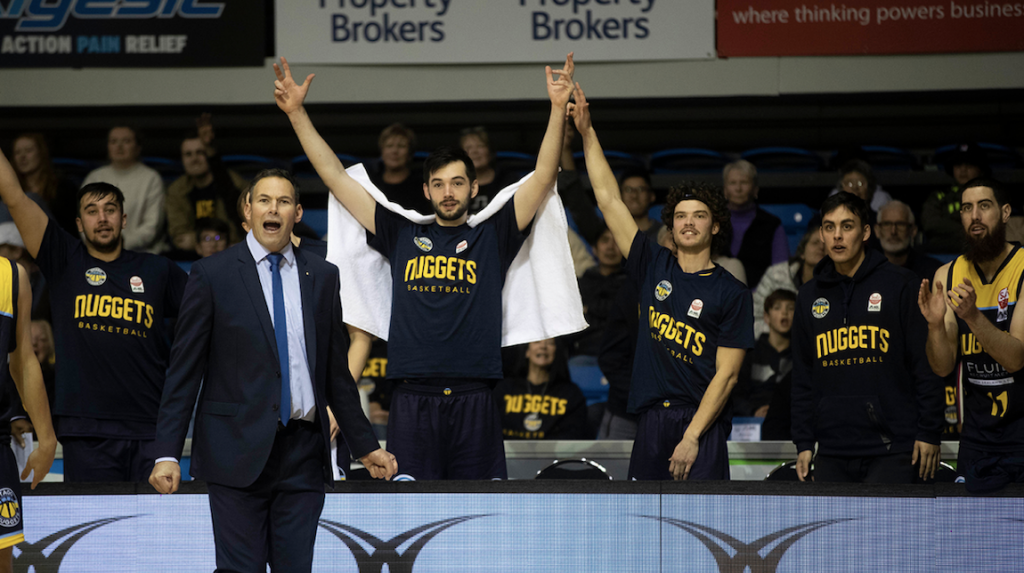 WHILE the end result of the Otago Nuggets and the Manawatu Jets ended in a blowout, both teams put on phenomenal scoring totals. But in their second of five encounters throughout the 2020 NZNBL season, the Nuggets strung together perhaps the most dominant display of basketball across all fixtures this year securing the number four spot in Draft Central’s Top 10 Moments of the season.

Heading into the contest, neither of the eventual grand finalists were yet to establish themselves as a serious top-two team. The Nuggets had only a modest .500 record with three wins and three losses to their name. Meanwhile for the Jets, they sat just half a game above Otago, earning four wins to this point thanks to an extra-game 30-point win over the Nelson Giants in their last outing.

Both sides would ensue in a back and forth opening period, as Manawatu’s newly signed wingman Nelson Kirksey got his stroke going early to open up proceedings. But Otago emerged with the more aggressive style of play by pushing the floor and attacking the rim, which in turn forced three early Jets turnovers and created a 12-5 lead as a result.

However, a late run of points from center Taane Samuel and guard Haize Walker tied the score with less than a minute to go in the first. Two free-throws in the dwindling moments of the opening term from Jordan Hunt were responsible for the Nuggets’ two-point lead at the opening break, but the good shooting from both sides of the aisle continued well into the second quarter.

Otago once again got out to an early advantage, pulling away with another 12-5 scoring run. Unsurprisingly however, Thomas Vodanovich became the main focus point for Brent Matehaere’s side. As the multi-time Tall-Black started to catch fire in an impressive first half, managing to convert four of his seven attempts, with three of them triples as the Jets trailed by just a single point after 20 minutes.

The Nuggets decided they needed a different approach if they were to pull away from a persistent Jets outfit and through the deep ball, Otago found a solution. Creating a quick 8-0 run, the team from Dunedin got themselves out to a comfortable double-digit lead and began a dominant one-sided second half in turn.

Otago shot a ridiculous 56 per cent from the field in an authoritative third term, as the lead quickly grew out of control. Outscoring the Jets 38-23 in the championship period, Tim McTamney’s side needed drastic measures if they were to claw their way back from a 16-point deficit in the final quarter. Ashton McQueen started the fourth off in good spirits knocking down a lead-off three, but when Jordan Ngatai and Kane Keil started to heat up, there was nothing that the Jets could come up with to slow down the South Island onslaught that was the Nuggets’ second half.

Otago pushed all the way to the finish line, outscoring Manawatu 35-15 in the concluding 10 minutes, capping off a 73-point performance in the latter two periods of the game and gliding away with the 130-94 demolition of the Jets.

Collectively for the Jets, both Jayden Bezzant and Vodanovich led the way for their side with 18 points apiece, but five different individuals for the Nuggets reached double digits. Keil’s game-high 29 points, six rebounds and four assists led the way for Otago, as Ngatai and Hunt combined for a massive 55-point haul.

As a team, the victors completed their performance with a script of impressive stats. Firstly, they concluded their shooting with a 57 per cent accuracy rate, going 47 from 82 on the floor. Otago managed to knock down 14 triples and 22 free-throws, and lastly, a plus-six on the boards and a plus-10 in assists would round out the highest scoring performance from a team all season. Furthermore, the Jets’ 94 points of their own helped bring the overall total of the game to 224, the largest points total in a contest form both troops all season long.

A lot went right for both sides in this high scoring affair, but the Nuggets put the rest of the league on notice with the 130-point effort against the Jets. For this masterclass at both ends of the floor, there’s no arguing that this moment slots in at number four in Draft Central’s list.