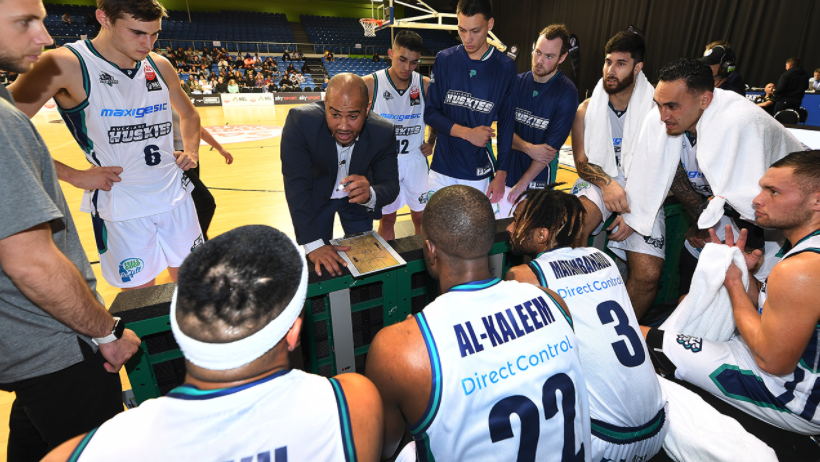 IF you just so happened to tune in to the opener of the NZNBL’s action on Thursday July 16 between the Auckland Huskies and the Taranaki Mountainairs, then you were privy to arguably the most thrilling contest of the entire campaign and number two amongst Draft Central’s Top 10 Moments.

Kevin Braswell’s side was certainly looking for nothing less than a win against an old foe in Taranaki, whom they upset in their first encounter to really shake up the league standings. A win for the Huskies once more, would bring their win-loss record back up to .500 for the first time since the start of the season.

Braswell noted pre-game the need to neutralise Taranaki’s two main threats, the one-two punch combination of Derone Raukawa and Marcel Jones, as well as the supplementary damage the Airs’ role-players could also inflict.

Nevertheless, it was a different combination that commenced business between the two sides, as Tohi Smith-Milner and Leon Henry both began what was a very impressive outing. Shortly after, Raukawa and Jones started off their nights with their initial baskets and the game was underway.

In a fast-paced three minutes that saw 18 points get put up on the board in that time, both teams got off to good shooting starts. Notably, Raukawa had his hands full with the fantastic play of Auckland’s point-guard Izayah Mauriohooho-Le’Afa. Despite this, Raukawa still managed to collect 11 of the Huskies’ first 18 points, but following a late triple from Mauriohooho-Le’Afa bringing his total to 10, Auckland obtained a slim one-point lead at the end of the first period.

The second quarter took on a more casual persona, as scoring started to come at a higher premium. But a three pointer from Jones and six straight points from Shane Temara allowed Taranaki to have a firm grip on the game for the first time in the encounter and force a Huskies timeout. Coming out of the huddle, the Huskies quickly dismantled their deficit by capping off a lovely 9-0 run with a couple minutes to go in the first half. But again, Jones led another charge handing back the lead to the Airs going into half time, 47-44.

Given that Auckland had failed to complete their main objective in slowing down Raukawa and Jones, the Huskies looked to their long-range shooters to try and gain the upper hand in the second half. First up to the plate in this respect was rising youngster in Taine Murray who did not make his presence known until the closing stages of the third quarter and made Taranaki pay for their hand-down defence as a result. Coupled with Smith-Milner’s rebounding, the Huskies oozed confidence as they led by seven with a quarter to go.

Reuben Fitzgerald, who had proven himself a prominent participant in the opening three quarters, made his impact on the game late in the fourth, as both sides jostled for the driver’s seat, converting on an and-one. As both teams arrived at the final seconds of regulation tied at 83-83 apiece, the Airs found themselves with a chance to win it at the death. But after two missed attempts by Jones off of two second chance points opportunities and a missed buzzer-beater attempt from Raukawa outside the arc, fans had to wait five minutes longer, as the game went into overtime, the second time for the Airs.

The Airs struck first with a nicely facilitated layup and three by Jones, which was further compounded by a follow-up three from Raukawa, putting Taranaki up by as much as six. But the Huskies did not wither away, as Smith-Milner and Mauriohooho-Le’Afa brought the game back to a single possession ball game and after Murray converted on a reverse hanging layup with just over a minute and a half to play, the match was once again at a stalemate.

Free throws became the deciding factor in the dramatic end to the game, as numerous fouls from the Airs put Auckland into the bonus. In the final ten seconds of overtime, the Huskies shot six free throws converting on five of them, to put away a resilient Doug Courtney led squad and topple the top-of-the-table Airs for a second time in a row in an overtime thriller, 102-99.

Even though Jones (36 points and 17 rebounds) and Raukawa (28 points and eight assists) proved their dominance once again, Temara tried his best to help the duo get their side over the line with 15 points and eight boards of his own, but Auckland’s bigs were too productive to let that happen.

For the Huskies, Smith-Milner had himself a ball, as he amassed one of the few 20-20 games of the season (22 points and 21 rebounds), whereas Murray led the way in scoring with 28 points alongside six threes. Mauriohooho-Le’Afa and Henry also proved instrumental collecting 21 points apiece, summing up a terrific performance from Auckland’s core.

In a game that had all the trademarks of a classic, it sits perfectly as a top two moment on Draft Central’s list, and perhaps the best game in all respects throughout the entire 2020 NZNBL season. One to remember.