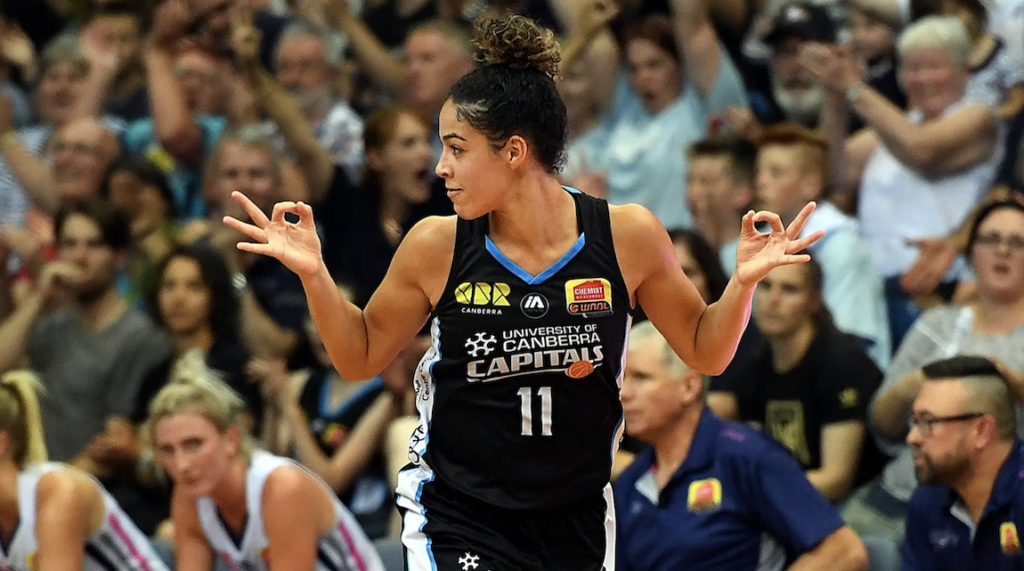 DRAFT Central’s formula for deciding this season’s top player of the WNBL was a rather simple one. Similarly to the NBL’s top player of the season, Bryce Cotton, the WNBL’s MVP and top-scorer, Kia Nurse, would reign supreme in terms of success individually and as a teammate. As this this season’s 2019/20 WNBL Champion, University of Canberra (UC) Capitals would defend their title, claiming their ninth in franchise history.

Having already spent a season with the Capitals, Nurse would hit the ground running, opening up her 2020 campaign with a 28-point and seven-rebound performance against the Adelaide Lightning, quickly establishing herself as one of the league’s most deadly offensive weapons. Throughout the entire season, Nurse would continue to provide an abundance of minutes for Paul Gorris’s side, only twice playing less than 32 minutes in a game, therefore leading the league in minutes per game by the end of Round 16, averaging 37.1 (1.4 minutes higher than Alice Kunek). But, the main headline act for the Canadian, was her scoring prowess. Going the entire fixture without scoring single digits is one accomplishment, but to average over 20 points per game throughout the entire competition would have already been enough to secure an MVP award for the 24-year-old.

Helping her side to a 15-win season alongside the likes of Marianna Tolo, Olivia Epoupa, Kelsey Griffin and Keeley Froling, Nurse would receive her second straight All-WNBL First Team selection, the Capitals’ Best and Fairest Award and the Suzy Batkovic Medal (League-MVP) to round out one of the league’s best individual season performances in history. Nurse is grateful of the system she was put in, as it allowed her to develop her offence even more.

“I was allowed to be in a system in Australia where I was a lot more free than any system I’ve played in since my high school days. “That allowed me to kind of get confidence back into my offensive game … and that was pretty exciting.” Playing four years at the UConn Huskies while she attended college, Nurse found out the formula for success is not given, it is earned, which is why the two-time NCAA Champion knew that her 21 regular season games were just stepping stones to the real prize.

The hard work would begin against the Melbourne Boomers in their semi-final series, with their matchup going to a deciding Game Three. Nurse would need every ounce of her will, to help get her side over the line against the wily Boomers side. Playing all 40 minutes at home, Nurse’s hard-fought 18 points, five rebounds, three assists and two steals, would be enough to get the Capitals to the finish line taking the contest, 77-64, with their extraordinary defence being the main proponent of their win. With the Boomers in their rear-view mirror, the Caps would look to topple the best team in the league to this point, the Southside Flyers.

Knowing full well that their best bet to win the series would be to steal Game One in Dandenong, Nurse would again be called on to play most of the game (she would average 39 minutes per game in the series). Scoring 19 points and securing five rebounds in Game One, the Capitals would steal the opening game of the series by a single bucket, forcing a decisive Game Two back home in Canberra. With Game Two being an all-out war between both sides, the Capitals found themselves down by a point with less than 30 seconds to go, but the always reliable Epoupa (Finals-MVP) would find the WNBL’s top scorer open for three, as Nurse would knock it down and win the Capitals their second straight championship. “It was obviously a fairy-tale ending to a really good story,” said Nurse reflecting on what was nothing short of a perfect season.

Whether imports will be allowed to play next season or not is yet to be confirmed by the WNBL given the severity of COVID-19, but if they are, then the likelihood of a WNBL three-peat for the first time since the Adelaide Lightning dynasty of 1994-96 may very well be on the cards for the Capitals, as they continue to be at the forefront of Australian basketball success.