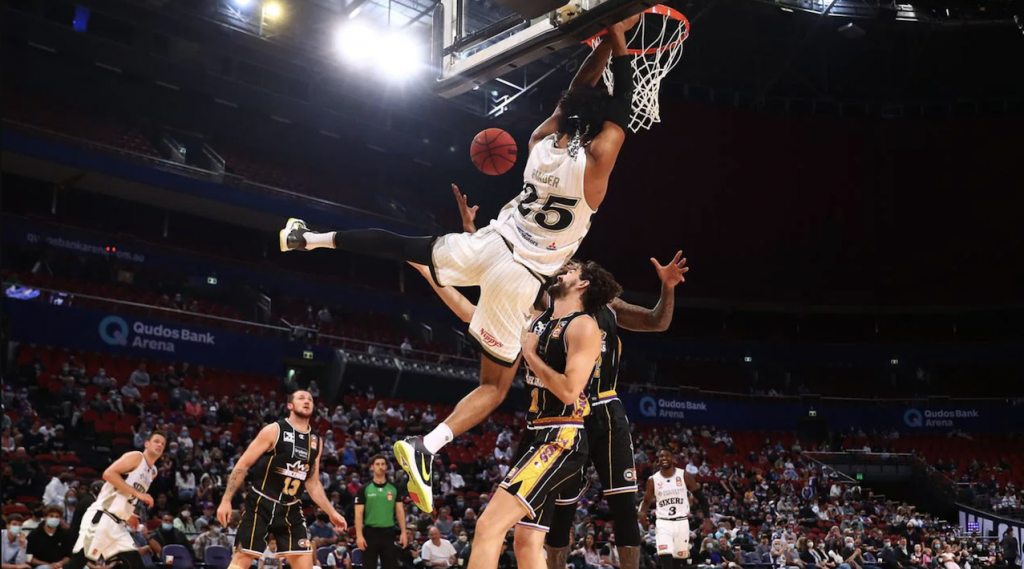 DANIEL ‘DJ’ Johnson single-handedly ripped the game away from Sydney Kings and helped his Adelaide 36ers to a memorable overtime victory in a stunning National Basketball League (NBL) overtime thriller last night. The teams were evenly poised at 81-apiece after four quarters, and that was when Johnson came to play, nailing 13 of his side’s 16 points to leave the home side in his wake and keep his team in the hunt for finals with the 97-88 victory.

The teams were delicately matched as Sydney headed into the contest with a 14-13 record compared to Adelaide’s 13-15 ratio, and the latter was in more desperate need of a win. The 36ers were coming off back-to-back wins, whilst the Kings lost their last outing, making the visitors the more in-form side of the pairing. However it was Sydney that stormed to the early lead, scoring 19-16 in the first term, and then 28-18 in the second to open up a 13-point advantage at the main break. Sensing the importance of getting back in the contest quickly, the 36ers hit back in the third with 24-11 to draw level heading into the last quarter.

Symbolic of most of the game, the teams were evenly poised throughout the final term with multiple lead changes, and the Kings holding as much as a five-point advantage with 2:40 on the clock once Tom Vodanovich nailed a three-point jump shot. Young gun Josh Giddey quickly drove through the lane to cut the deficit to a single possession and then the multi-faceted Isaac Humphries made no mistake from beyond the arc to tie the game with 1:39 remaining. The teams had a combined five misses in the final 90 seconds, with Daniel Kickert‘s last second jump shot not able to hit the mark.

Jordan Hunter scored the first points 12 seconds into the overtime period, but it was all Johnson and his side from there, with a turnaround jumper followed by Sunday Dech making a three-pointer to hand his side the lead by that margin. With the game on the line, Johnson came to play, nailing both free throws off a foul then back-to-back three pointers and the margin had blown out to 11 points with 1:24 on the timer. Vodanovich desperately clawed back two points, but a third consecutive triple from Johnson for his side secured the win with a heavy 12-point advantage, the 36ers’ largest of the game. Vodanovich scored a consolation triple to cut the final deficit to nine points, but it would not be enough to get over the line.

The 36ers topped the field goal percentage marginally, with a higher volume of long-range successes, whilst absolutely dominating the rebounds (57-40), and winning the assists (26-24), blocks (10-5) and second chance points (33-8). The Kings were admirable with more steals (4-2), far less turnovers (5-10) and therefore had more points from turnovers (14-7).

Johnson won the Player of the Match for his clutch effort, scoring the only three triples of the night in overtime to finish with 20 points, nine rebounds and two assists. Across four quarters, it was hard to look past young gun Giddey who racked up his third triple-double of the season, collecting 11 points, 12 rebounds and 12 assists. Brandon Paul (19 points, six rebounds, two assists and two blocks), Humphries (11 points, eight rebounds and six blocks), Tony Crocker (12 points) and Keanu Pinder (11 points, four rebounds) were all double-digit scorers.

The 36ers take on Illawarra Hawks tomorrow night on the road in a quick turnaround, whilst the Kings travel up to Brisbane to face the Bullets at Nissan Arena on Thursday.