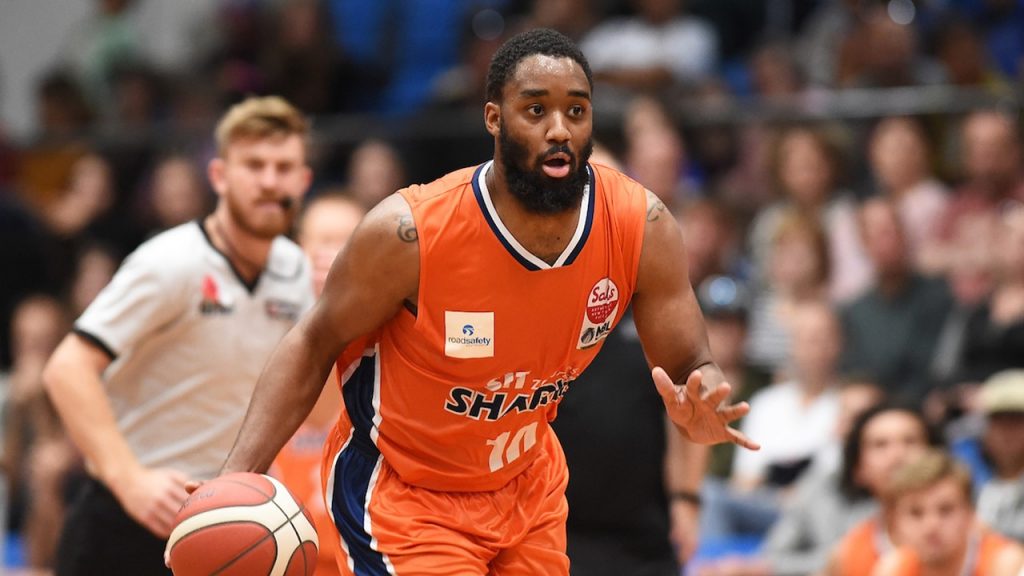 A TWO-point jump shot from Josh Cunningham in the dying seconds has saved Southland Sharks from surrendering a 13-point half-time lead, just getting past a determined Taranaki Mountainairs by that exact jump shot, 78-76. The Sharks dominated the opening term to race out to a 12-point lead, and held the 13-point advantage at the main break, before the Airs hit back. Over the next two quarters, the visitors piled on 42 points to 31 to race back into contention, even levelling the scores with 12 seconds on the clock, before Cunningham hit the winning shot with seven seconds to go.

The Sharks took control from the first tip-off, scoring the first five points through Dom Kelman-Poto (two) and Courtney Belger (three), while the Airs missed their first three long-range attempts before Tai Wynyard struck true from inside the arc. It was not long before Brayden Inger made his presence felt, worrying the Airs’ defence and getting to the line. His two successful free throws in the final few minutes put the lead out to 19-9, and whilst Marcel Jones did get a basket back, the Sharks secured the last four points for a 23-11 first term lead.

The game was much more even after quarter time, as the Sharks got out to a 15-point lead, but Jones continued to be a problem, and for each of the home team’s baskets, the Airs responded with five different players scoring midway through the term. Jones and Francis Mulvihill added five consecutive points to drag the deficit back to within 10, but Toby Gillooly and Kelman-Poto quickly stretched that out again, with only a Jones triple in the final seven seconds making it a 13-point half-time deficit.

Southland started the third like they had the first half, scoring the first seven points of the match to race out to a game-high 20-point lead. It looked like it might end up a blowout, but a timeout when the Airs were down by 18 points with five minutes on the clock changed things. Led by Haize Walker, and cameos from Wynyard and Nelson Kirksey, the Airs scored 13 consecutive points and with a 61-54 scoreline at the final break, it was well and truly game on.

The Airs got within five when Walker nailed back-to-back free throws, but a run of five consecutive points for the Sharks pushed the lead back out to 10. The largest margin of the final term was 12, when Alonzo Burton nailed a triple with 6:15 on the clock and the score read 71-59. Six straight points saw that lead halved until Cunningham stepped up. He delivered with the layup as well as the And-One chance, and the Sharks were out to a nine-point lead with 3:41 on the clock.

Then came the Airs. Wynyard quickly responded with a turnaround jump shot, and when Jones nailed a triple with 89 seconds on the clock, the deficit was just five points. Belger (twice) and Burton both missed chances in the final minute, and when Calin Davison successfully delivered off the alley-oop, it was three points the difference and all of a sudden, the tension in the building was sky high. Gillooly stretched it out to a two-play game with only one of two free throws with 17 seconds on the clock, and Jones returned to the action to hit a jump shot with 13 seconds left. He unluckily missed the And-One chance off the foul, but when Wynyard scooped up the offensive rebounds and hit the jumper, scores were level with 12 seconds on the clock.

In a change up, Jones was subbed out with Walker subbed back in, only for Cunningham to be the hero with seven seconds on the clock. His jumper handed the Sharks the lead, and whilst Jones was quickly brought back on for Kirksey and chosen as the man to try and win the game from long-range, his shot missed and the buzzer sounded with the Sharks victorious, 78-76.

In the end, the Sharks were not as accurate as they could have been – shooting at 34 to 43 per cent from the field, but their work in winning the ball back – 14 steals to two – was phenomenal, whilst the Airs wasted possession with 18 turnovers to eight. The Sharks also punished the Airs for their turnovers, delivering 24 points to 10, though the visitors won the rebounds (51-47) and had six more points in the paint (44-38).

Cunningham was named man of the match thanks to his game-winner and the highest points for the Sharks, picking up 18, as well as eight rebounds and two steals. He was well supported by Burton (15 points – three of seven from long-range – four rebounds, three assists and two steals), Gillooly (13 points, 11 rebounds and two assists) and Kelman-Poto (11 points, eight rebounds, four steals, three assists and two blocks).

For the Airs, Jones lived up to his double-double ability with 23 points and 10 rebounds, as well as six assists and a block. Walker finished with 15 points, five rebounds and four assists, hitting four of eight from three-point range, while Wynyard (11 points, nine rebounds and two assists) and Mulvihill (10 points, six rebounds and five assists). Kirksey was also prominent off the bench with seven points and seven rebounds in 17 minutes on court.

The Airs take on Otago Nuggets tomorrow night in a quick turnaround, while the Sharks will have a break until May 7 when they lock horns with the Wellington Saints.