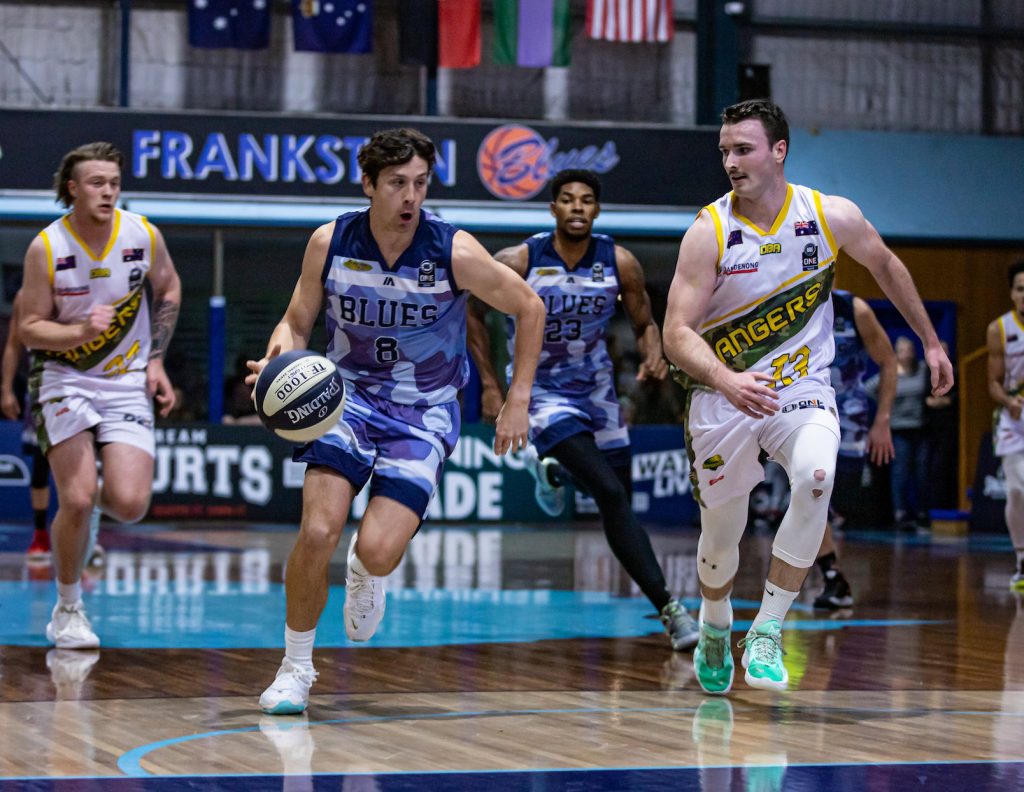 “WE’VE got a group group of guys here at Frankston and a great culture at the club, right down to the juniors and everything like that. It’s pretty close-knit.”

Starting his basketball career where he grew up in Tasmania with the North West Thunder, guard Lachlan Barker worked his way through the State Basketball league (SBL), then becoming a development player for the Sydney Kings in the NBL1 before the Blue reached out and he headed to Frankston.

Despite last year’s season being cancelled due to COVID-19, the Blues Men’s team has had a good start to the 2021 season, currently sitting in second place on the ladder after the first nine rounds. Barker says the missed season helped to grow his enthusiasm for the sport.

“It definitely gives you a bit more of a passion for it, you know. You sort of get, I guess, a bit complacent with it all, like it’s just sort of always there and you can always do it, but when it’s taken away you realise how much you enjoy it and miss it if you’re not doing it.”

With Melbourne recently going back into a snap lockdown, the team have been trying to keep up their motivation in order not to lose that winning momentum they are on.

“We’ve still been talking even though we haven’t been able to train and see each other as such, we’ve still been doing all of our individual parts like keeping fit and staying active while we can’t train together,” Barker says.

“Also, we’ve been doing a few Zoom sessions… so we still stay involved and connected, and yeah I think we will come out the other side still firing.”

Barker believes the Blues are in a good position look forward to the rest of the season, with their training reflecting that.

“We want to play fast, we want to be up tempo, and be really good on the defensive end. So we know we’ve got a lot of talented guys and we can score the ball, but if we lock down at one end we sort of feel like we can’t be beaten,” he says.

“Winning comes first and then all the individual stuff kind of comes second in my opinion, so yeah that’s the main goal just to get as far as we can and hopefully that’s the championship.”

Also in a good position for a championship is the Blues women’s NBL1 team, who are currently undefeated this season.

“I think for us it’s very realistic to go finals and then who knows what can happen from there. I think we as a group have a really great coaching staff as well, so I think anything is really possible for us,” says Frankston Blues guard and Australian Opal, Tessa Lavey.

With her extensive list of accolades, including playing the WNBL for Bendigo Spirit, playing for Richmond in the AFLW, and representing Australia in 2016 at Rio and set to attend the Tokyo Olympics with the Opals, how did Lavey end up at the Frankston Blues?

“I guess it’s just an off-season league for us from the WNBL,” she says.

“I know Snelly [head coach Belinda Snell] really well, I’ve played with her before, and she also does the Opal’s plays, so me trying to get to Tokyo, that’s obviously a bonus for me knowing the plays inside and out.”

Similar to the men’s team, Lavey and her team and trying to keep the momentum up for the rest of the season and keep their eye on the prize. Head coach Snell, former Australian Opal, Olympic Silver Medallist and 2021 WNBL Championship Assistant Coach, has been focusing on defence as a key skill in training.

“I think, you know we always focus on our defence, because we believe that’s a strong suit of ours, our defence and our communication. So then we just create some chemistry on our offensive end too, but we want our defence to create our offence, I think that’s the goal that Snelly is trying to drill into us which is really good,” Lavey says.

“There’s plenty of great people there to get the job done, and I think we can do that and Snelly is going to lead the way.”