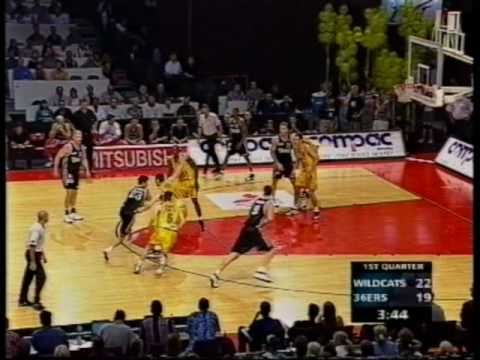 IT has been 158 days since the last National Basketball League (NBL) game. However, Draft Central are diving back into some basketball content to provide highlights that even the most die hard NBL fans may have never come across. In today’s classic, we look at a jaw dropping game that likely altered the course of an entire NBL season. But first, we need to take it all the way back to the 1999-2000 season. The Perth Wildcats were struggling to find continuity both on and off the court, with new owners and inconsistencies on court as fans reminisced about the glory days of the mid nineties. But things started to slowly change this season with the side rallying after coming off four injury plagued seasons and four early finals exits.

But in Round 22 of a tough fought NBL season, things were beginning to look up for the Wildcats. But taking on the top seeded Adelaide 36ers, a team who just came off back to back titles, was no easy challenge. The game kicked off with a deep three from Anthony Stewart, to set the tone of the game early. That shot would be the beginning of a competitive battle with no predictable winner in sight. But that was made very clear by the back and forth nature of the first quarter which saw the 36ers finish with a lead of 32-29.

The Wildcats’ decision to play through Paul Rogers for the majority of the second quarter seemed to be their only working weapon, as the big man was making the perfect play on every possession, unlike the rest of the starters. However, the 36ers utilised a more up beat strategy, relying on transition baskets and catch and shoot jumpers, which was a massive success. This mix of style ensured there was never a stale moment all game. This attraction only elevated when David Stiff dunked over Rogers through a put-back. A revenge moment for Rogers’ poster at the end of the first period.

The half ended with the Wildcats trailing by 16 points, but with only one loss all season at home, the home crowd’s energy never dispersed. It was fortunate that this was in front of a sell out crowd, because the Wildcats were able to cut the lead to eight heading into a nail-biter final quarter. The lead continued to lessen from 11 to five to two until finally with two minutes remaining, the Wildcats led by a point. But Brett Maher was able to drop some big time points down the stretch for the 36ers, to regain some composure for his side and be a calming presence in attack.

Down one point with 20 seconds left on the clock, a potential overtime period was looking very slim. This was a win it or lose it play for the Wildcats. The play collapsed, as Ricky Grace was swarmed by defenders left and right, leading to him dishing it out to an open Stewart. After a pump fake, one dribble pull in, Stewart threw up the last shot of the game while an entire sold out crowd gasped at the same time. Nothing but net. The Wildcats clenched a staggering two-point victory 88-86.

After the celebrations, Stewart walked up to a fan made poster with all the teams left to beat and crossed out the last one, the 36ers. A surreal moment for the season. This comeback win rallied the Wildcats into the next gear – they would only lose two more games for the entire season, including finals. Safe to say, this acted as a momentum booster for them to go on and win their fourth championship in franchise history.