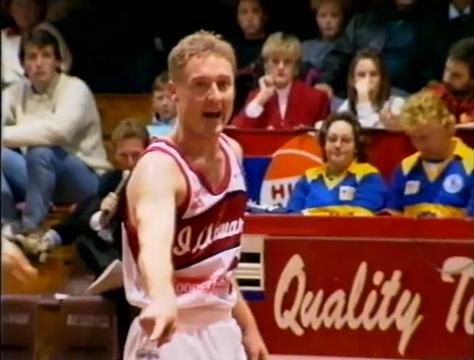 MISSING the NBL… so are we! That is why Draft Central is turning back the clock, to look back at some of the great classics in throughout the National Basketball League. In today’s contest, we take a look at a league right before the cusp of baggy shorts, a league with an offensive rating similar only to the game of today. Except in 1991, instead of denting the scoreboard with threes, teams relied on high a paste offence with a lot less space. This meant teams attacked the rim quickly, leading to very high scoring games, highlighted by this 344-point exhibit from the Melbourne Tigers and Illawarra Hawks.

When the up and coming Melbourne Tigers team crossed enemy territory, it was unlikely they thought the result of that game would be talked about nearly 30 years later. The game marked the great Lindsay Gaze’s 200th game as coach meaning there was plenty on the line. Both teams were looking for their first win in three games, in what was one of four games played that Saturday night on Round 16.

Safe to say if you are a defence fanatic – this is not the game for you. That was made very clear early into the game when the Illawarra Hawks came out with a full court press on defence. Instead the game was littered with ridiculous yet impressive shots to keep the fans on the edge of their seats as the players found new ways to sink shots from across the court. It was a fantastic display of attack with the two sides combining for a whopping 104 points in the first quarter – as players on both teams, proved to  have a hot to find the net with great ease.

But with the hot start to the game failing to cool down, it soon began to resemble an All-Star game. The biggest factor for this upsurge in baskets was the Hawks inability to lock down then 26-year-old Andrew Gaze, who scorched the Hawks with 27 points in one quarter – an all-time league record. This would not change as he scored 41, shooting 89 per cent, in just the first half. Again, another league record. The Tigers, led by Gaze, could not be stopped as they beat the Hawks by 28 points, finishing the game 186-158, beating the previous record of 297 for most points in a game. Gaze left with 59 on 79 per cent shooting, along with dishing out 11 assists. David Colbert was also hot for the Tigers dropping 42 points with 20 rebounds. Patrick Fairs of the Hawks finished the ball game with 41 and 10 rebounds, a commendable effort.

The Melbourne Tigers finished the season as the sixth seed and therefore missed out on finals contention. However, this season was remembered as Gaze’s breakout year, averaging 38.7 points per game and winning his first MVP – just one of seven.