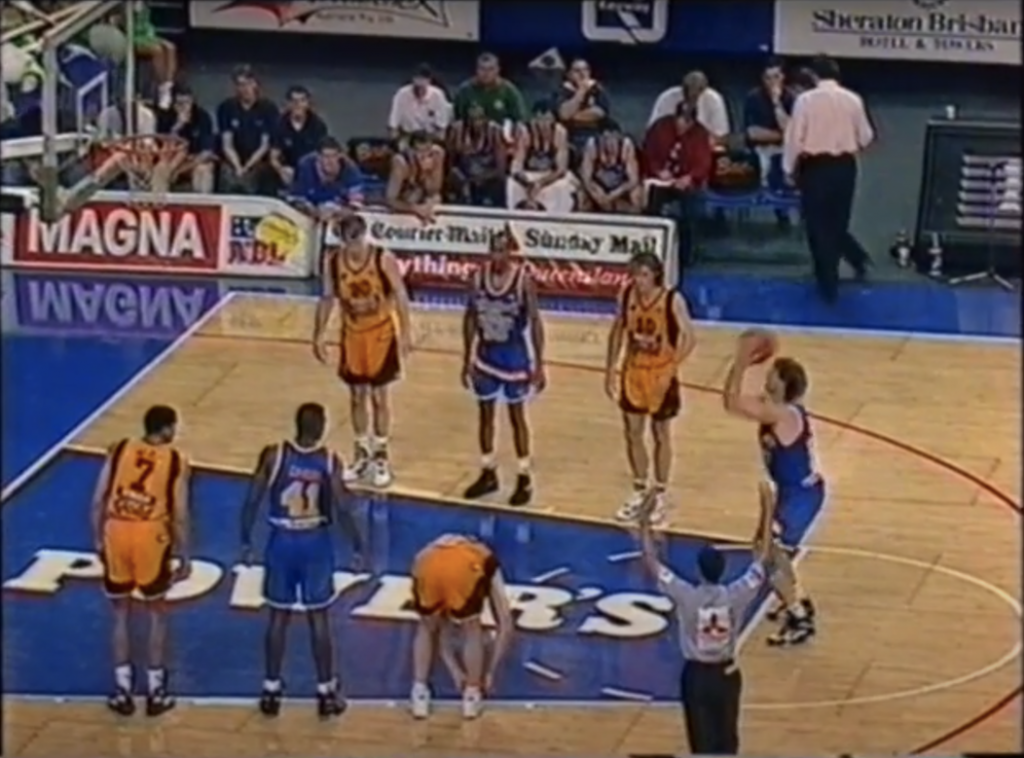 AWAITING the return of the National Basketball League (NBL) Draft Central might just have the perfect substitute, as we cast an eye over some Classic Contests. In today’s piece, we look at one of the most heart-racing games in basketball history.  The 1994 Round 9 clash between the Brisbane Bullets and rivals Perth Wildcats was a thriller that went right down to the wire. It was a hot contest, where missing even a beat of action, could mean missing the entire outcome of the game as the match went into a staggering four overtime periods, testing players endurance, tactics and resilience out on court.

The Bullets came out of the gates with a level of energy that was unmatched by the opposing team. This was mostly due to the fact that the Wildcats had run over the Townsville Crocodiles by 40 points less than 24 hours prior to the game, and were unaware just how many minutes this game would eventually tally. They would leave the first period down 34-22, but were already showing signs of physical exhaustion. But sometimes, all a team needs is a quarter for their stars to find that competitive spirit that was burning so bright, only the night before.

The Wildcats – the third seed – played the rest of the game like they had something to prove to the Bullets, who were sitting second on the ladder. Taking charges, diving for loose balls and hitting the glass, the Wildcats exerted maximum effort to every single play, as they gradually cut the lead until they were only down one point at the half. The Bullets, in large thanks to Shane Heal’s six three-pointers were able to wake up and remain in front by just three points. The rest of the fourth would remain in a state of back and forth nature until they found themselves tied at 92 apiece with 19 seconds left.

The Wildcats were gearing up to pass it in from the sidelines while every fan in the Brisbane Entertainment Centre stood up. But the play was botched, meaning the game entered the first overtime period of the 1994 NBL season. No team was able to find an edge until there was only 15 seconds left on the clock, with scores tied once again. This time with Brisbane having the opportunity to seal a victory. Heal, who had already knocked back 33 points, found himself at the top of the perimeter, dribbling the ball for the last shot. But the pressure got to him forcing a costly turnover.

Another five-minute overtime period was on its way. Both teams fought heroically but were flooding the court and benches in sweat. Even the fans looked tired, but the longer this game continued, the greater the importance of staying composed. The fans would eventually be cheering defence for what was now, the Wildcats’ turn to execute on a game-clinching play, with 20 seconds on the clock, of course, scores tied.

Scott Fisher, of the Wildcats, took the midrange jumper to win the game, but like with players fatiguing the shot fell short to sit at 110 points apiece, now in a third overtime. With thirty seconds left in the third period, Heal was able to tie the scores up with a miraculous corner three. There was a reason they called him Shane ‘The Hammer’ Heal. Eric Watterson orchestrated the period ending play but threw a fatigued turnover. One where the decision was right but the pass was so slow it was picked off. This game had entered its fourth period of overtime.

Due to a missed free throw, the differential was only one point and with the 20 seconds remaining, the Wildcats up by one, the Bullets had to make a play if they were to run away with a victory. Of course, Heal stood up to the plate, ran through the defence and chucked a fade away from the side of the key. Swish. With 3.7 seconds left on the clock, the Wildcats were unable to make a sensible play and the game was over. Heal left the game with 43 points in 53 minutes in what was a stellar and gruelling performance.