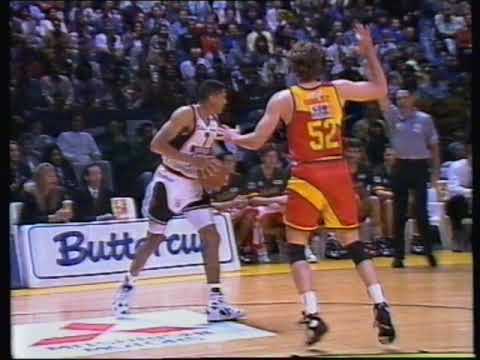 THEY say great teams become championship teams from how they respond to losses. Well in 1993, the Melbourne Tigers were undisputedly a great team. Led by National Basketball League (NBL) phenom Andrew Gaze, the superstar had dragged the Tigers to five straight finals appearances, but still had nothing to show for it. Funny to think now but Gaze was even thought of as a pretender, ‘the next great talent who could never get over the hump’. The ridicule only peaked the year prior, when Gaze and the Tigers were sent packing after losing the grand final to South East Melbourne Magic. But as of the 31st October, 1993, the Melbourne Tigers were just that, great.

After going undefeated all playoffs, the Tigers continued their hot streak, winning Game 1 of a tough fought, four point differential, grand final. But things were not as smooth in Game 2, as they took their first loss by seven points. You can imagine the mockery facing Gaze and the Tigers in what would be the final game of the season.

To add on top of all this historical pressure, the Tigers had to now get it done in front of an emphatic Perth crowd. The pressure clearly took its toll on the Tigers as they failed to make a three until the second quarter, a very unusual occurrence for the sharpshooting team. This was in large part thanks to Gaze’s quiet first half, only dropping 13 points, most coming towards the end of the period. Fortunately, the Melbourne Tigers were not a one man band, and started the third quarter up by just three points. Almost like starting the game fresh again.

The Wildcats, from start to finish, were exceptional in their ball movement, as they were nearly tripling the Tigers in assists. This was a result of their more team oriented identity, a true characteristic of a championship team. It was with this unpredictability of scoring, that the Wildcats, led by league MVP Ricky Grace, were able to put the ball through the basket in such a consistent fashion. But if they wanted to win this cut throat game, they had to keep Gaze on a tight leash. A hurdle that was being handled nicely, as Gaze only scored two points for the entire third quarter.

But if the Tigers wanted to win this game, and the silverware, Gaze had to step up. After all, this was his moment. His time to prove exactly why he was considered an Australian basketball prodigy. This entire game centred around whether or not Gaze would rise to championship status or remain a runner up.

It was all decided in the fourth quarter against a team who had won their last 17 home games who now had their loudest crowd of all. It made it a lot easier that the Wildcats offence turned into a high school run scrimmage quickly, with no player knowing when to shoot or where to stand. This is a classic con of not having a clear cut offensive weapon to run through when things get tough.

Gaze, who drew a significant amount of attention from the defence, was sensational in finding the best player on the court for the best possible shot and while the Wildcats figured things out towards the end, it was just too late. The Melbourne Tigers won their first NBL championship, beating the Wildcats, 104-102 in a thriller.

Gaze and his legacy was now set, as he finished the game with 22 points, while also assisting on many of Lenard Copeland’s 35 points. The two will forever go down as Tiger legends for their role in their premiership glory.