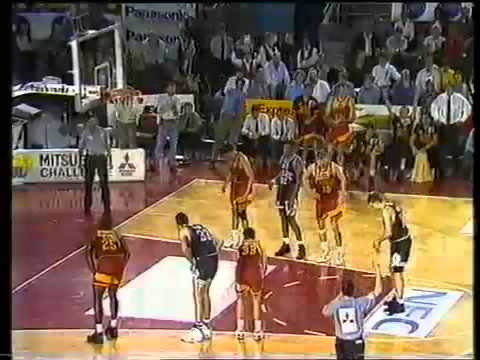 IF you have a friend telling you there is no difference between the early nineties and now in how games were officiated, this is the game for you. If you are missing the nostalgia of elbow jumpers and the empowerment of bigs or just want to watch a top notch last game of a Grand Final, where neither team leads by double digits for the entire game this is the right Classic Contest for you.

It was obvious these two teams were way past the having to ‘feel each other out’ stage. They were even past the ‘we need to play every possession like it is our last’ stage, instead they came out with plenty of niggle and a real fire in the belly. This was characterised by constant bumps on screens, over the top trash talking and the occasional hard hit on a driving defender and coming from a fan, that is where the most entertaining basketball is played. Not even three minutes into the game, John Dorge and David Simmons got into a pushing contest as Dorge bear hugged Simmons mid air and even held on to him for an extra second or two. No technicals, no ejections. Play was resumed in 15 seconds.

But it did not take a genius to realise Dorge was not as happy to move on mentally from that early scuffle like the rest of the players on the floor. He quickly nabbed two more cheap fouls, putting his team and himself in jeopardy very early into a Grand Final. That meant the Magic had to sit their 6’10 starting center on the bench. His lack of presence was not the be all end all for the team as they left the first quarter down only one point. However what did look like a pivotal moment for the Tigers, was when Simmons acquired his fourth foul in the first play of the second quarter. As every fan in the stadium would predict, the Tigers almost instantly went down a level with their energy and with Tigers’ superstar Andrew Gaze, still in a shooting slump, no team was able to establish a steady lead. This only added to the already intense, already overly competitive, dynamic of the game.

Lanard Copeland, who was already on the other side of a couple hard hits, was now carrying the Tigers offensively in the second half. A commendable achievement considering he only finished with 14 in the Game 2 loss. Copeland stood out more than any other player on that end, as both teams only finished with 69 a piece, heading into what was the last quarter of the season. But just like in the second, Simmons started the quarter with another foul, making the total five, with only one away from having to watch from the side lines. His energy all game was infectious and uniquely valuable, but for his team to win, he had to play more passive on defence. The pressure was on.

It is worth noting that the Magic’s shot selection had been relatively poor the entire first half, and did not get much better throughout the game. When you have your centers shooting 17-footers, a shot that cannot be in the playbook, in the nineties, something is wrong. Magics’ Robert Rose was deserving of some type of reward, because without him, there is no chance the Magic were in the position they were in. With four minutes remaining in the last quarter it was a one point ball game. Gaze only just made his first contribution to the scoreboard as the minutes ticked down, meaning anything could happen now. The Tigers still went for Gaze to take them to the promise land, but the icon was ice cold. Luckily for the Magic, they were able to hit their late game free throws in front of the home crowd, and were able to come out on top because of it, finishing the game, 95-88.

Rose was instrumental dropping a quiet 26 points. Bruce Bolden was excellent all game defensively, while also plowing in 21. The shock of the game was that Gaze, who was regarded as one of, if not the best player in the NBL, only had 18 and was unfortunately unable to bring the Tigers their first NBL championship.