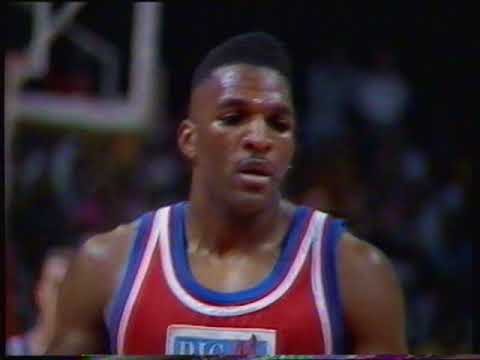 Although there is no National Basketball League (NBL) at the moment, fans can still get their basketball fix with Draft Central’s Classic Contest series. In today’s piece, we look back at the 1991 NBL Grand Final, Game 2 to be exact, where the Eastside Melbourne Spectres fought for their season against the Perth Wildcats, as they tried to become the the third team in NBL history to win back-to-back championships.

If you are feeling nostalgic over some real tough big men who refused to take a backwards step – look no further than the great Dean Uthoff. Right after the very first foul against his teammate, Uthoff towered over the referee, then screamed through a deep voice that the referee better not get in the way of this game. Yes, in the early nineties there were bulky centres intimidating referees and without these guys, mixed with the occasional oversized, over talented shooting guard who can score from anywhere, say Andrew Gaze, old NBL match clips would not get as many views.

The intensity in Perth’s arena only rose when the game had to be stopped after Kendal Pinner and Kent Lockhart started a pushing contest. All instigated from pure physicality in the low post. But with no team gaining an edge all first quarter, the competitive madness only rose. The Spectres’ zone that was working so well in the first, was beginning to crumble with every deep shot that left the Wildcats’ hands. But after leading by as much nine, the Spectres fought back valiantly to bring the deficit to only four at halftime.

Fortunately for the Spectres, the team began defending the perimeter exceptionally well. Unfortunately for the Spectres, they kept allowing their opponents to cut in front of them leading to them getting the ball at the teeth of the zone. The zone would inevitably collapse under its own weight leading to a lot of close range buckets for the Wildcats.

But with six minutes remaining in the third with the Wildcats leading 57-52, the Spectres began to attack the rim and were almost always either getting buckets or two shots at the charity stripe. This happened again and again until finally, the Spectres were almost exclusively driving to the rim to kick it out for the next person – just for them to try and drive head first into the basket. A simple play that was taking off in a big way. To the shock of the fans, Spectres took the lead and then some. The Wildcats looked helpless and frustrated leading to more communication problems leading to more Spectre buckets. They were now heading into a decisive last quarter up 69-62.

This streaky run was almost nullified instantly when the Spectres came out with four consecutive costly turnovers. The rest of the quarter saw both teams exchanging buckets, with no victor in sight until the last minute. The Wildcats had the lead but botched the play leading to a transition and one on the other end. Scott Ninnis missed the free throw but Lockhart was fouled going for the rebound. With the Wildcats in the bonus, he now had two free throw attempts to make this either a one or two possession game. Makes one, misses the next and… the Wildcats turn it over…again. Game over. Final score; Spectres 86, Wildcats 81.

The Wildcats would go on to win Game 3 and the championship trophy that follows, but this game was more than just a speed bump to greatness.

Hardcore fans begin to notice after a few Grand Finals, that the game itself completely changes. There are no half-hearted fastbreaks, no uncontested layups and no room for developmental players. Just a lot of controlled panic and loud fans. This game, with all of its heated moments and back and forth scoring, embodies what a Grand Final should be. A stellar game for all fans.