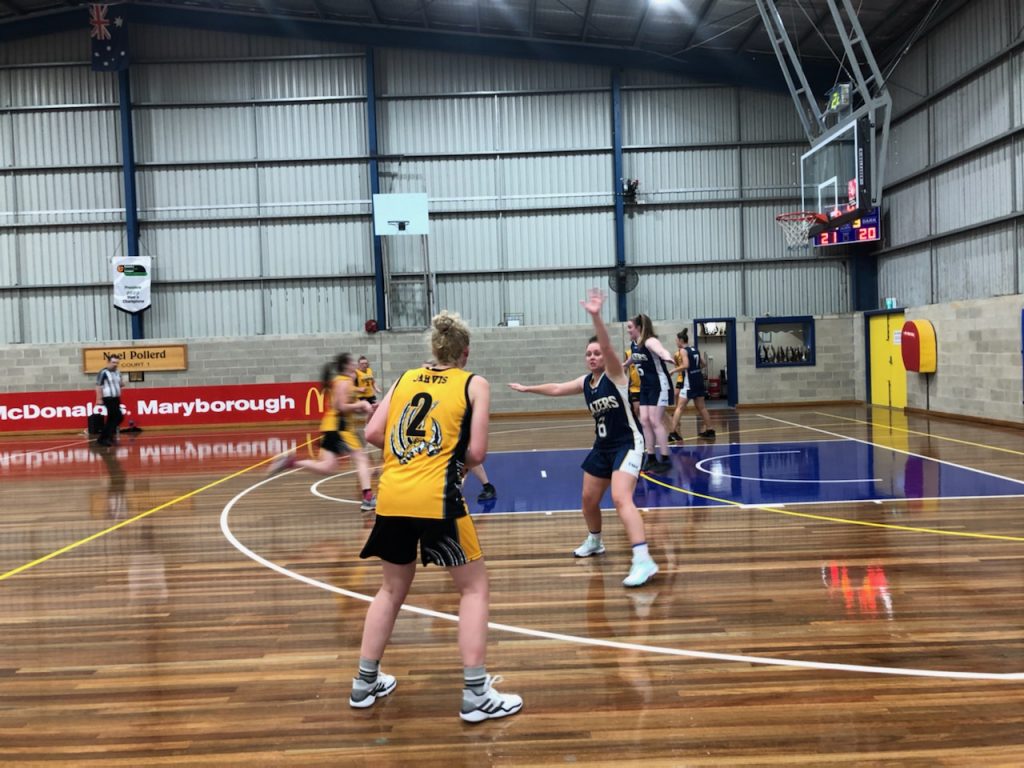 MARYBOROUGH Blazers and Bendigo Spirit have made the perfect start in both the men’s and women’s Country Basketball League (CBL) competition in 2021.

Bendigo Braves and Maryborough Blazers have made a ripping start to the 2021 North West Men’s CBL competition, winning all of their games thus far to sit on top of the able. Their combined five wins sees them sit on top of the ladder, one win clear of Echuca Pirates whom fell to the Braves on the weekend. In the mid-table logjam are Mildura Heat, Swan Hill Flyers and Kyneton Tigers, while Castlemaine Cannons and Bacchus Marsh Lions round out the competition as the two winless sides.

Bendigo’s three wins have come against Echuca, Castlemaine and Bacchus Marsh thus dar, winning by five, 16 and 45 respectively. In the huge win over the Lions, Jake Lloyd piled on 38 points in a match-winning performance, while Trent Leech and Lachlan O’Brien both scored 13 apiece. For Bacchus Marsh, Anthony Bowyer top scored with 14, followed by Daniel Jackson (11) and Jordan Kirk (10).

Lloyd’s hot scoring streak continued against Castlemaine, putting up 23 points ahead of Leech (11) and Jack White (10) while Rhys Brown (15) and Lachlan McDonald (14) were the key scorers for the Cannons. In the tight win against Echuca, Isaac Murphy top scored for the Braves, putting up 15 points. Lloyd (14), Leech (12) and O’Brien (10) were not far behind. For the Pirates, Liam Tenace (17) was the match-high scorer, while Staci Richardson (12) and Tyler Phillips (10) both hit double-figure points.

Echuca had recorded wins previously over the two bottom sides, getting up over Castlemaine by nine points in a thriller. Phillips was the dominant player on the court with 29 points, with Tenace providing a secondary shooting option with 25. Richardson (16) and Dylan Payne (11) also had impressive outings. Aidan Brohm was the key shooter for the Cannons, piling on 29 points, while Dylan Slender (16) and Taylor Bell (15) were strong on the offensive end as well.

A similarly close eight-point win over Bacchus Marsh saw Richardson top score this time, putting up 29 points for the Pirates, ahead of Phillips (14), Riley Clarke (13) and Tenace (12). For Bacchus Marsh, Jackson nailed 15 points, just ahead of Kirk (11), trying hard to turn the tables on the opposition.

Maryborough Blazers remain undefeated after wins against Kyneton Tigers and Swan Hill Flyers to open the season. In the 43-point demolition job over Kyneton, it was Harry Butler (26 points), Lachlan Drummond (17) and Tom Hurse (13) who led the way, while Brady Neill and Zac Mortlock both finished the match with 11. For Kyneton, Thomas Scott (13 points) and Iggy Spiller (10) hit double-figures.

Against Swan Hill, Drummond scored a match-high 28 points, causing all sorts of headaches for the Flyers alongside Niell (26). They outscored the entire opposition team in the 89-53 victory, as Steven Bowden (12 points), Ruan Drotsky (11) and Henry Thompson (11) were the key scorers.

In the most recent match between the Tigers and Flyers, the latter got on the board with a nail-biting four-point victory. Kyneton’s Thomas Scott was hard to stop with 32 points to lead the way in the 68-64 triumph, whilst Matthew Quinn hit 12. Bowden (24) was the standalone key shooter for the Flyers.

Bowden also led the way with 14 points alongside Matthew Gardner (12) in Swan Hill’s triumph over Mildura Heat. Noah Valentich and Tarryn Shaddock both scored 10 points in the narrow 58-49 loss. The Heat were much better against Kyneton with a 29-point win at home. In that match, Shaddock scored 17 points, three more than Valentich, while Mark Colverd (17) was the top scorer on the losing side.

Much like the men’s competition, Maryborough Blazers and Bendigo Braves are the two undefeated sides, with the former winning both their games thus far, and the latter winning its sole match on the weekend. Kyneton Tigers have performed better in the women’s league, picking up two wins from three games, with Mildura Heat next thanks to a 1-1 record. Swan Hill Flyers and Echuca Pirates are yet to win a game having played three and one games respectively.

Maryborough Blazers tipped off their season with a seven-point win over Kyneton at home. Maddison Egan scored a match-high 20 points, while Claire Constable (13) and Claire Blower (11) were also productive. For the Tigers, Alexandra Strawhorn (15 points) and Michelle Fletcher (13) were busy. In their second game, the Blazers won by 16 points over Swan Hill, as Blower (19 points) took the lead, and Millie Cracknell (16) was busy. For the Flyers, Arlee Bennett (14 points) and Laura Anderson (12) both hit double-figures.

Bendigo Braves enjoyed their return to the competition on Sunday, posting a huge 80-46 win over Echuca Pirates. Madeline Sexton scored a match-high 22 points, but she was far from alone with Hayley Harrington (18) and Sharna Appleby (18) both having big days out. For the Pirates, Meg Eishold (14 points) points and Greta Pearson (10) both hit double-figure points.

Kyneton Tigers posted two wins over Swan Hill Flyers and Mildura Heat in the Tigers’ other two games. Strawhorn scored 16 points for the Tigers, while Fletcher put up 13, as did Brooke Mangan. Madeleine Jeans was the sole double-digit scorer for the Flyers with 10 points. Against the Heat, Kyneton got up 82-59, and the combination of Strawhorn (26) and Fletcher (13) was again prolific, while Adrienne Cameron (12) was also impressive. Demi Wall (24 points) was the star for the Heat in the loss, as Indi Spratt (12) and Georgia Mayne (10) also tried hard.

In the Round 1 battle between the Heat and Flyers, it was the former that took home the chocolates in a 26-point win, 69-43. Wall led the scoring once again with 20 points, while Ava Zadow (11) and Mayne (10) notched up double-figure points. The Flyers did not have a double-digit scorer, though Amy Jobling scored a team-high seven points in the defeat.