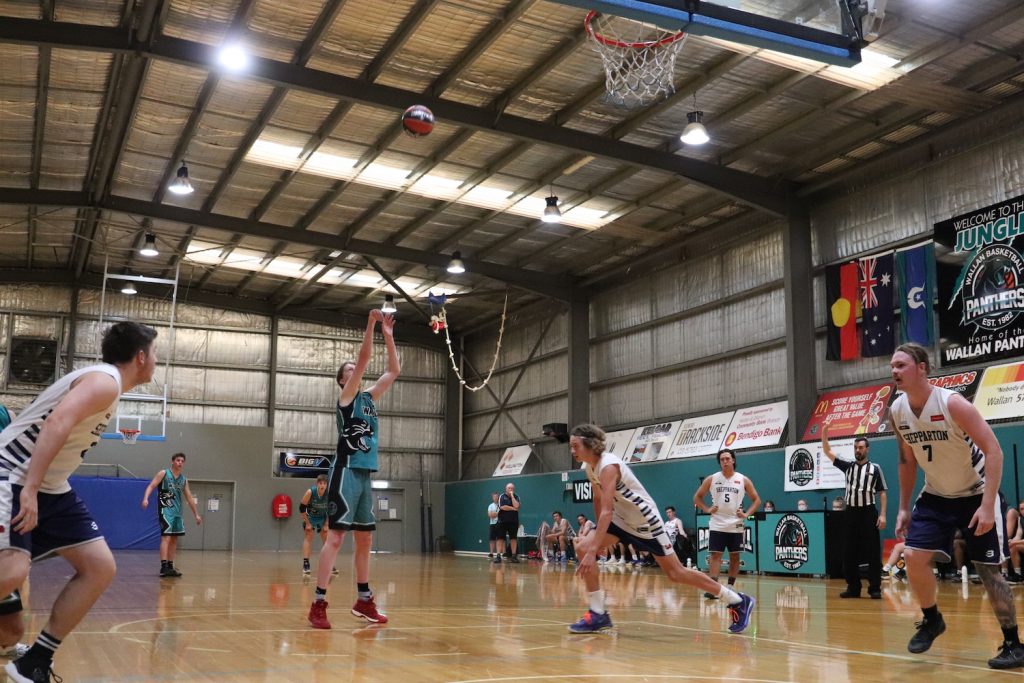 SEYMOUR Blasters have established themselves as one of the teams to beat in both the North East Men’s and Women’s competitions in this year’s Country Basketball League (CBL). They are undefeated in both leagues thus far, though a number of teams have also had impressive one-off games to set up an entertaining third round of action.

All bar one side have played at least two games to tip-off the 2021 North East Men’s competition. Showing just how even the competition is, Seymour Blasters lived up to their name to last away the competition en route to a 2-0 start to the season. Myrtleford Saints also posted a win in Round 2 following a Round 1 bye, with four of the remaining five teams level with a win and a loss from two games. Shepparton Gators have played the most games of anyone, but unfortunately are yet to find a victory in three attempts.

The top of the table Blasters had no fears on the road against Wodonga Wolves, recording a comprehensive 32-point victory. Jack Murphy put up 18 points for the winners, while Tyler Best was next with 15. Also hitting double-figures were Jordan Hockley (11), Robbie Satori (10) and Thomas O’Connor (10). Byron Hosie top scored for the entire match, finishing with 19 points in a losing side.

Proving their Round 1 win was no fluke, the Blasters beat their own record by scoring 95 points in the second match, defeating Wangaratta by 39 points. The Blasters are the only side to record more than 80 points, and have done so in both outings. Satori led the way on this occasion with 17 points, followed by Hockley (14), Patrick Green (12) and O’Connor (10). Tom Young managed 14 points for the Warriors, with Nicholas Redley scoring 10.

It was more positive in the previous match, with the Warriors taking care of Benalla Breakers, 57-49 in a low-scoring contest. Charlie Young stepped up this time, putting up 19 points, while Liam Wright managed 17 in the win. Patrick Mahoney had 14 points for the Breakers, just ahead of teammates, Lachlan Kego (13) and Max Hemphill (10) despite the defeat.

Immediately bouncing back from that Round 1 loss, the Breakers knocked off Wallan Panthers in a tight five-point victory. Mahoney looked unstoppable with 25 points, going head-to-head with Panthers’ shooter Keenan Gorski (25). Along with Mahoney, Kego (17 points), Thomas Moloney (12) and Corry Westbury (11) all contributed, while Max Viitala (14) and Luke Liesegang (13) hit double-figure points in the Panthers’ loss.

Much like the other sides, the Panthers have had the one win to start the season, too good for winless Shepparton Gators. The Panthers won 79-56 back in Round 1, with Gorski putting up another 20 points, while Liesegang (17) and Sebastian Villegas (13) also impressed. For the Gators, Jordan Michel managed the 22 points in a hard working effort, while Dylan Wayman finished with 10 in the loss.

The results did not get any better for the Gators in Round 2, picking up back-to-back losses there, starting with Myrtleford Saints. The Saints won 69-48 to tip-off their 2021 season in style, mostly thanks to a 26-point outing from Jalen Barker. He was the clear standout in the 11-point victory, with Marcus La Spina (11) also notching up double-figure points in the win. Nick Dodd (10 points) was the only Gator to achieve the feat, though Boston Dowling (nine) came close.

Shepparton’s most recent loss was their closest, going down by just four points to Wodonga Wolves. Both sides were coming off losses, and both had chances to win it, though the away side stepped up when it counted. Samuel Hawkins hit up 18 points in the win for Wodonga, while Willis Morrow (10) was also productive in the win. Dodd almost contributed a third of his team’s points with 22 for the Gators, while Nathan Grace and Wayman both recorded 11 points.

Six teams are competing in the North East Women’s competition, with Seymour Blasters also in control in that league, having won both matches to-date. They are one of only two sides to have recorded a win in the competition, with Wallan Panthers winning their Round 2 clash after a bye in Round 1. Wangaratta Warriors also picked up a victory – in Round 1 – before falling to the Blasters, while Wodonga Lady Wolves and Benalla Breakers are yet to taste victory from their early season matches.

Seymour Blasters opened the year with a nail-bitting four-point win over Wodonga Lady Wolves, 67-63. In a tight contest, young gun Dyani Ananiev scored 16 points for the Blasters, leading the way with Maddison Ford (15) and Hayleigh Frost (15) among the top regular players to notch up some big scores. Despite being on the losing side, Charlotte Beavan hit a match-high 22 points for the Lady Wolves, while Jade McCowan finished with 15.

In an eerily similar match, though with a higher scoring flow, Seymour again got the chocolates in Round 2 by four points, getting up 94-90 over Wangaratta Warriors in an early top two clash. Ananiev knocked down a game-high 27 points in the encounter, while Ford helped herself to 23. Also getting in on the action was Olivia Pearce (18) and Frost (14). For the Warriors, Olivia Storer (26 points) and Chaye Crimmins (23) caused some headaches, while Ebony Norris (14), Jorja Reidy (12) and Issy Byrne (11) all contributed with double-figure points.

The Warriors did pick up a win in their earlier match, getting the job done by 15 points over Benalla Breakers in Round 1. Crimmins was a star in that contest with a huge 29 points, while Tessa Clayton finished with 13 points. For the losers, Hannah Onley was the sole player to reach double-figures, knocking down 16 points in the Breakers’ loss, while Charlotte Balzer was next best with nine.

It was a tougher encounter in Round 2 for the Breakers who were no match for the red-hot Wallan Panthers. Sending a message to the rest of the competition, the Panthers stormed to a 91-33 victory to run out 58-point victors at home. Carley Cranston top scored for the winners putting up 21 points, though she was far from alone in a shared load. Kasey Lennox (12 points), Melissa Buckley (11) and Amber Ross (11) all managed double-figure points. The Breakers did not have a double-figure scorer, though Lillie Greig (eight points) and Molly Glazebrook (seven) worked hard.