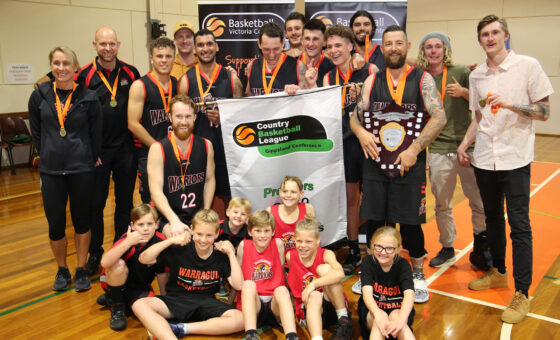 MAFFRA Eagles and Warragul Warriors remain the teams to beat in the Gippsland Country Basketball League (CBL) competitions after they won top-of-the-table clashes. It was an action-packed round of basketball action, with just three rounds now remaining and the season surpassing the halfway mark at the end of Round 4.

Five games played out across Round 4 in the men’s CBL Gippsland competition, with no side picking up two wins. Moe Meteors managed to pick up one win from two matches, whilst the bottom two sides in Lakes Entrance Pelicans and Churchill Blue Devils lost both their matches. Maffra Eagles went outright top and remained undefeated, while Warragul Warriors and Sale Sonics also picked up important wins as the ladder has started to take shape.

The match of the round built up prior to the weekend was the top-of-the-table clash between the unbeaten sides in Maffra Eagles and Moe Meteors. Knowing only one could come away with the victory, it was the Eagles – who have played one less game – that claimed the win by 11 points, 90-79. Samuel Whelan (22 points), Frazar Brouns (19), Elliot Hunt (17) and James Whelan (12) all shared the points around in a big day out for the winners. Moe had its fair share of scorers, as Christian D’Angelo (15 points), Josh Pearce (14), Rhys Anderson (12) and Jayden Van Dyk (11) hit double figures.

Moe managed to bounce back against Lakes Entrance Pelicans on Sunday, with D’Angelo hitting up another 25 points, while Ben Van Dyk (14) was three more than Jayden Van Dyk (11) and Stephen O’Brien (11). Andrew Savige and Thomas Stephenson both scored 13 points, and Jesse Pearce finished with 10, but the Pelicans could not overcome the Meteors, going down by 22 points.

It was the second loss of the round of the Pelicans who hosted Korumburra Wildcats on Saturday. The Wildcats ran out dominant winners despite the long road trip, picking up the highest score of the round with a 103-71 victory. Teenagers Keith Robinson (33 points) and Brodie Mabilia (21) tore the Pelicans apart, while William Lumby (13) and Matt Kennewell (12) also contributed strongly. Thomas Stephenson (16 points), Jesse Pearce (14) and Jordi Williams (11) were the top scorers for Lakes Entrance.

The other game on Saturday was Warragul Warriors’ 15-point win over Churchill Blue Devils. The Warriors hosted the winless Blue Devils and managed to control proceedings to get up, 87-72. Murray Myers (15 points), Tom Muir (13) and Jarryd Moss (12) all registered impressive final tallies, as Zac Bezzina (17) hit a match-high score in defeat, and Jordan Canovan (14) was also solid in the loss.

Unfortunately for the Blue Devils, their luck did not change on Sunday, losing out to Sale Sonics by nine points. Canovan (18 points) and Bezzina (16) were again the key players in the 67-76 defeat, though Nick Linton also added 13 points to the tally. Owen Gallagher (17 points), Jake Hutchins (16), Luke Williams (15) and Harper Fraser (10) all hit up double-figure points for the losers.

Looking to the women’s competition, Moe Meteors turned the tables on Maffra Eagles in their head-to-head and then went on to smash Lakes Entrance Pelicans, while the Pelicans had a similarly one-sided loss at the hands of Korumburra Wildcats, as Warragul Warriors fended off the Wildcats on Sunday.

After two losses to start the season, Moe Meteors came up trumps in Round 4, defeating the two sides above them on the table to finish on an even 2-2 from four matches. In the opening game of the round, the Meteors won 78-65 over Maffra Eagles on the road, as Samantha Labros (16 points) and Caitlin Demczuk (15) led the way. Abbey Noblett (11 points) also contributed in the win, while Alex Gallatly (18), Jaime Gallatly (16) and Emerson Connolly (13) were the best for the Eagles.

Moe had a much easier time against Lakes Entrance Pelicans, smashing their way to a massive 101-28 victory. Labros was near-unstoppable with 27 points, though she was far from alone as Cassandra Wass (14), Noblett (12) and Demczuk (11) all had productive outings. No Pelicans player reached double-figure points, though Natalie Bire (nine) was the top scorer from the losing team.

A day earlier the Pelicans suffered a 71-point defeat at the hands of Korumburra Wildcats at home. Chloe Hogg put up a ridiculous 35 points in the win, while Alahna Arnason (21) and Tyla Angwin (11) both hit double-figure points. Jasmine Witham (seven points) was the top scorer for the Pelicans on the day.

In a top-of-the-table match to close out the round, Warragul Warriors remained undefeated – albeit having played just the two games – securing an 83-72 win over Korumburra Wildcats. Dallas Loughridge (24 points), Mikaela Dickson (17), Tanarly Hood (12) and Peta Rhodes (10) all contributed well to knock off one of the contenders, while Hogg and Arnason still caused plenty of headaches with 22 points apiece, but it was not enough in the 11-point defeat.