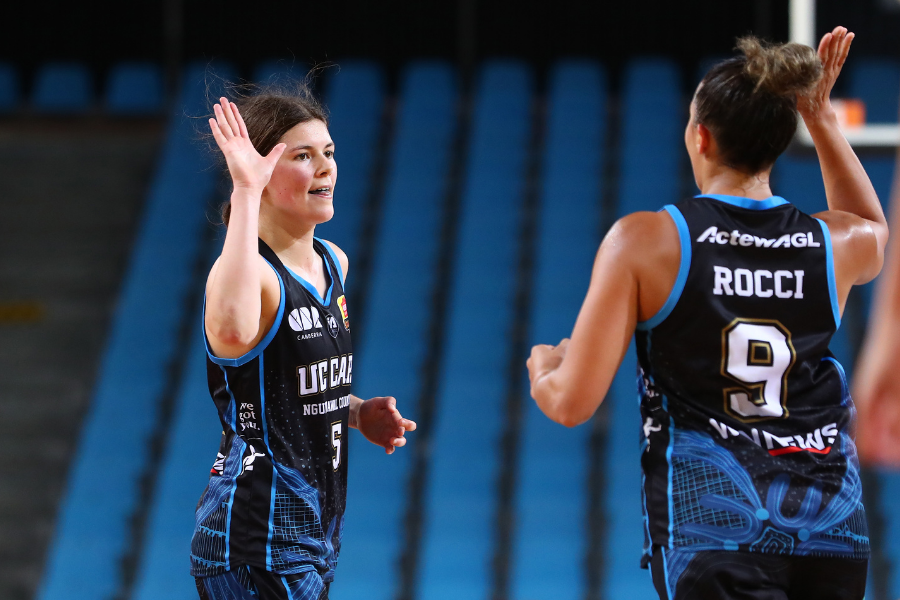 REIGNING back-to-back premiers University of Canberra (UC) Capitals have made it six wins on the trot, but not without a scare from Perth Lynx in Cairns last night. The Capitals, who managed to dispatch title favourites Southside Flyers easier than many anticipated, had a huge fight on their hands against the lowly ranked Lynx outfit, pushing them all the way and only falling three points short by the final buzzer, 73-70.

In a match that proved to have plenty of momentum swings as the Capitals played their second match in four days, and the Lynx their third in what was a heavy schedule for the teams, both left nothing out on the court in pursuit of victory. It was the favourites who tipped off the season in style with a strong first term to race away to a 28-19 lead and open up an advantage that looked like it could well be a one-side contest.

The second quarter could not have been any different as the Lynx stunner the Capitals, piling on 24 points and restricting the free-flowing Capitals to just 11, to hit the front by four points at the main break. Having only won one game for the season thus far, Perth was proving it could compete with the best, and even when the Capitals threw everything at them in the third, they could only claw back the deficit to level the scores at 55-apiece heading into the final quarter.

Despite the momentum swinging back in the Capitals’ favour, it was the Lynx who scored 10 of the first 13 points in the final term to race out to a 65-58 lead with five minutes to play. Enter Maddison Rocci. The talented up-and-comer managed back-to-back layups to draw her side within three points, then a couple of long-range jumpers from Kayla Steindl that missed saw teenager Jade Melbourne win the defensive rebound and the Capitals worked the ball down to co-captain Kelsey Griffin who nailed the turnaround jumper.

Their lead cut to just one point, Alex Ciabattoni found Darcee Garbin for a shot and the talented former Townsville Fire shooter made no mistake. But a contact came from Tahlia Tupaea and Garbin headed to the charity stripe for a third point. She made it count and it was a two possession game with two minutes on the clock. Looking in trouble, up stepped Griffin who nailed a three-pointer just in time and put her team within a point. The celebrations were short lived as her opposition captain, Katie-Rae Ebzery made a jump shot of her own and the lead was out to three again.

Griffin had a shot from long-range to try and make it back-to-back threes but missed, though Melbourne was quick to bounce on the offensive board and hit up Rocci to the open Tupaea who did drill it from outside the arc. Scores were tied with 47 seconds on the clock. Ashley Sharp tried to match it up the other end but missed, and Griffin again made them pay by grabbing the board, and with Tupaea involved, this time it was the youngest player on the court in Melbourne who put the final nail in the coffin. With eight seconds on the clock, Melbourne hit the three-pointer to win the game as a last second chance from Ebzery missed.

It is fair to say Griffin was the difference, shooting 21 points and picking up 12 rebounds in a mammoth performance off the bench. Rocci was the only other double-digit shooter, hitting 11 points and dishing off from four rebounds. Marianna Tolo (nine points, six rebounds), Melbourne (five points, six rebounds) and Froling (three points, five rebounds) all impacted off the boards, while Mikayla Ruef (seven points, four rebounds, three assists and three steals) and Tupaea (eight points two rebounds and six assists) impacted off the bench.

Ebzery top scored for the Lynx, knocking down 17 points – though at 36 per cent efficiency from the field – as well as having five assists and three rebounds. Garbin picked up a double-double thanks to 14 points and 11 rebounds, while Sharp racked up 10 rebounds to go with her five points. Also in double-digits was Ciabattoni who scored 13 points and four assists, while Taylah Burrows was the standout off the Perth bench with seven points and six rebounds.