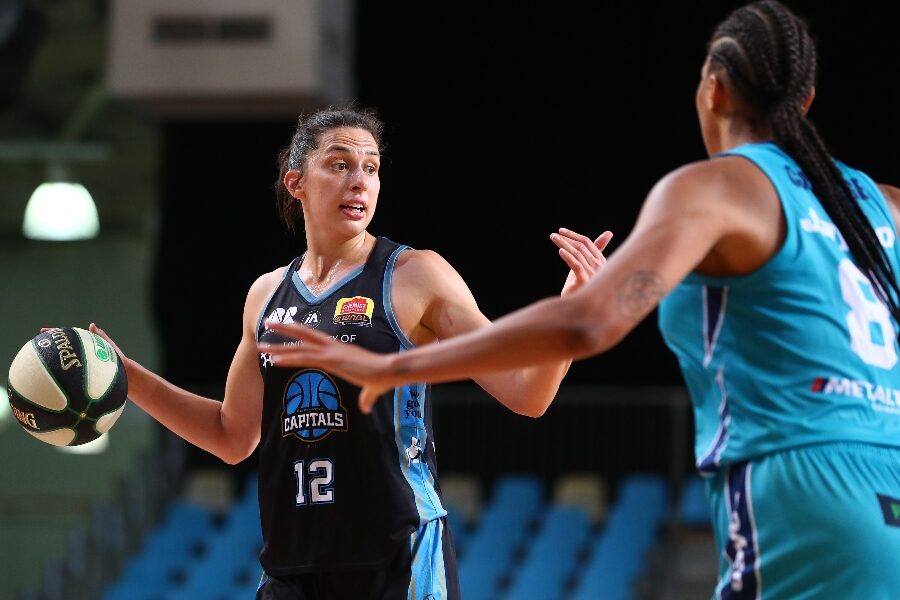 IN what was a defining victory, back-to-back premiers University of Canberra (UC) Capitals reminded fans just what they were capable of, dominating against the highly fancied Southside Flyers to win by 23 points and go outright with the most wins thus far in the Women’s National Basketball League (WNBL). Both sides came into the clash with 4-1 records, though the Capitals had strung together four consecutive wins since an overtime loss to Adelaide Lightning on the opening night of the season, and since have gone from strength to strength.

That was certainly the case last night, when the Capitals outplayed the Flyers, convincingly winning three of the four quarters to secure a 95-72 victory, as six players hit double-figure points as the Flyers’ impressive depth struggled outside of Liz Cambage and Sara Blicavs. The ominous signs were there from the beginning with the Capitals racing out to a six-point lead at the first change, before streaking away to a 12-point advantage at half-time.

The third term saw the Flyers manage to stem the momentum and actually win the quarter 23-22, but it was the stunning 29-17 final term by the Capitals that saw them blow the margin out to 23 points and secure such a huge win. They dominated the rebounds (38-32), steals (9-4) and second chance points (18-8), while also having six less turnovers (10-16). The Flyers squared the assists ledger at 20 apiece, whilst having an extra block (3-2).

The Capitals had no shortage of contributors on the night, and a greater accuracy from the field – 52 per cent to 45 per cent, with Marianna Tolo leading the way. The co-captain had a team-high 19 points (64 per cent accuracy), as well as seven rebounds, two assists and two blocks. Hitting the scoreboard in a big way was Maddison Rocci who produced 17 points, three rebounds, three assists and two steals, while young gun Jade Melbourne again stood tall under pressure, producing 14 points, six rebounds and six assists.

For the Flyers, Cambage (26 points, six rebounds and three blocks) and Blicavs (21 points, seven rebounds) did all the damage for the Flyers, but in an un-Southside like performance, lacked support on the scoring front. The usually slick Leilani Mitchell could only manage three points – one from eight from the field – and just the three assists, half of her season average.

Southside Flyers will need to regroup in 48 hours to take on Perth Lynx on Wednesday, before the Capitals have a crack at the no doubt tiring Lynx on Thursday.

Flames fire up to narrow win over Lynx

LED by Funda Nakkasoglu off the bench, the Sydney Uni Flames have recorded a tight seven-point victory over Perth Lynx last night to keep their finals hopes alive and move to a 2-4 record early in Round 3 of the condensed WNBL season. The Flames looked good early and on track to record a big win, racing to an eight-point lead at quarter time. The Flames had restricted the Lynx to just 11 points in the first quarter, before Perth clicked into gear in the second.

The Lynx piled on 24-23 in a high-scoring term that made up about a third of the total game’s score, as Perth’s depth started to hit up the scoreboard. While the class of Darcee Garbin and Katie-Rae Ebzery helped cap off a strong finish to the quarter, it was the likes of Alexandra Sharp who started the term in good form. For the Flames, Nakkasoglu was getting her hands on the ball as the team shared it around.

Perth started to get on top in the third term and cut the deficit to just two points at the final break, with an Ebzery layup with three seconds on the clock – making it eight points for the term – drawing the Lynx within a basket. The Lynx had got within a point two minutes earlier, but each time the Flames pulled away. They did so in the final term, scoring the first eight points of the quarter to go 66-56 up, and it was hard to pull back.

When Garbin sank a triple with 2:44 on the clock, the deficit was just three points however as her and Ebzery had done everything they could to lift their side. Unfortunately for the Lynx, that would be their last score, as the Flames closed out the match courtesy of of deliberate fouls and subsequent four free throws to win, 74-67.

It was the team effort of the Flames that got them home, though the shooting of Nakkasoglu – which included four of five from long-range and 10 of 16 from the field for 27 points, was a catalyst. Alison Schwagmeyer (12 points, nine rebounds, four assists and three steals) and Lauren Scherf (12 points, 10 rebounds, three assists and two blocks) were incredible, but it was the stunning work of Anneli Maley off the defensive boards that stole the show. Only the five points herself, the former Southside Flyer racked up 20 rebounds – 15 defensive – as well as three assists in a starring performance.

For the Lynx, it was again the Garbin and Ebzery show as the talents combined for 41 of their team’s 67 points. Garbin hit 22 points at 47 per cent from the field, including four of 10 from long range, while picking up eight rebounds – four up each end – three assists and two steals. Ebzery hit 50 per cent of her field goal attempts for 19 points, as well as five assists. Kayla Steindl did not make any of her eight field goal attempts, but was still the standout, picking up 12 rebounds, including nine off the defensive boards. Sharp had eight points, while Jessie Edwards came off the bench for six.

Sydney Uni Flames now have a little rest until their clash with Adelaide Lightning on Saturday, which also sees them back up against Townsville Fire the next day. That is not the case for Perth Lynx, who have to lick their wounds and then take on last year’s grand finalists, Southside Flyers and UC Capitals back-to-back tomorrow and Thursday respectively.