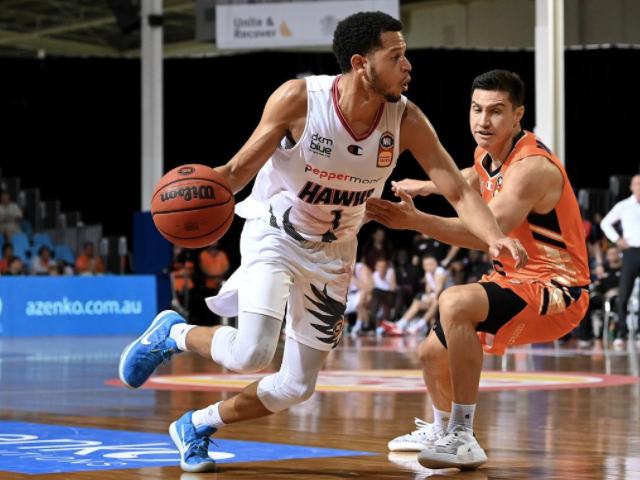 LAST season’s wooden spooners continue to shock the Australian basketball world, after The Hawks knocked off the Cairns Taipans last night, 90-70, extending their unbeaten start to the campaign to four wins in what was a one-sided affair for almost 40 minutes.

Enduring a bad run of form to start the season with one win from four outings, the Taipans made sure to get out ahead of the Hawks. Nevertheless, the visitors started to do what they had been doing all season to this point – they hung around.

A nine-point run for the Hawks to end the first was capped off by two triples from Justinian Jessup, and gave the Illawarra-based side a 19-12 lead at the first intermission. A shocking turnaround to say the least, given the promising start Cairns had undertaken prior to the Hawks’ scoring streak.

The role of catch up would fall on the Taipans’ shoulders as Brian Goorjian preached to his side to stand their ground on the defensive end, and this piece of advice kept Cairns at bay for the remainder of the second quarter with the home fans becoming increasingly agitated.

After tallying eight offensive rebounds in the first half, the Hawks held a comfortable nine-point lead at the main break, 45-36, which was also a product of the team’s 44 per cent shooting percentage and the side’s secondary unit (the bench scored 18 points in the first two quarters).

For the Taipans, Cameron Oliver played his part in the opening half with 11 points and six rebounds as Scott Machado had an also impressive eight points and six assists after 20 minutes. But if Cairns were going to turn the tide, the rest of Mike Kelly’s roster had to step up their game and quickly.

Goorjian’s list made the Taipans’ task all the more difficult, starting the third quarter with an 11-4 start, stretching the lead out to a game-high 16 points. Adding to this, with Jessup hitting his mark from range, Sam Froling and Tyler Harvey were also proving to be more than a nuisance for Cairns.

But a small victory would land on the side of the home team with the Taipans winning the third quarter 19-16, meaning they would need to overcome just a six-point lead in the fourth.

However, another hot start at the beginning of a period for the Hawks would prove to be too much late in the contest. While Harvey, Jessup and Froling continued to facilitate a clinical appearance last night, the Hawks bench that was so effective early on in the opening half would see out the rest of the meeting, rounding out a terrific effort once again on an opposition’s court.

Blowing the deficit out to 20 points by the final buzzer and making another statement win, it can be stated that the Hawks are easily the hottest team in the league at the moment and their numbers in Round Three prove this notion.

Shooting 45 per cent on the night, hitting the mark on 12 threes, forcing 13 turnovers from the Taipans and capitalising on 26 points off of turnovers, there was little the Hawks could do wrong last night.

It was the same story player-wise for the Taipans, with Oliver and Machado providing the most contributions on the scoreboard and on the court in general. For Oliver, he finished with a 20-point, 11-rebound double-double, whereas Machado was held to just 14 points and seven assists. Mirko Djeric compiled 11 points in 25 minutes, while Kouat Noi was kept quiet, posting two points on just five total attempts from the field.

In what was one of his best season performances yet, Harvey was unstoppable with 21 points and five triples to put next to his name, while Jessup was not far behind him with 19 points of his own. Froling continued his awesome form in NBL21 with 14 points and seven rebounds.

A well-earned 10-day break now awaits the Hawks who will face the South East Melbourne Phoenix in Round Four, meaning that the four-win team will need to wait a little longer before heading home. Cairns will continue to look for answers tomorrow afternoon, when they head South to clash against Queensland rivals, the Brisbane Bullets.