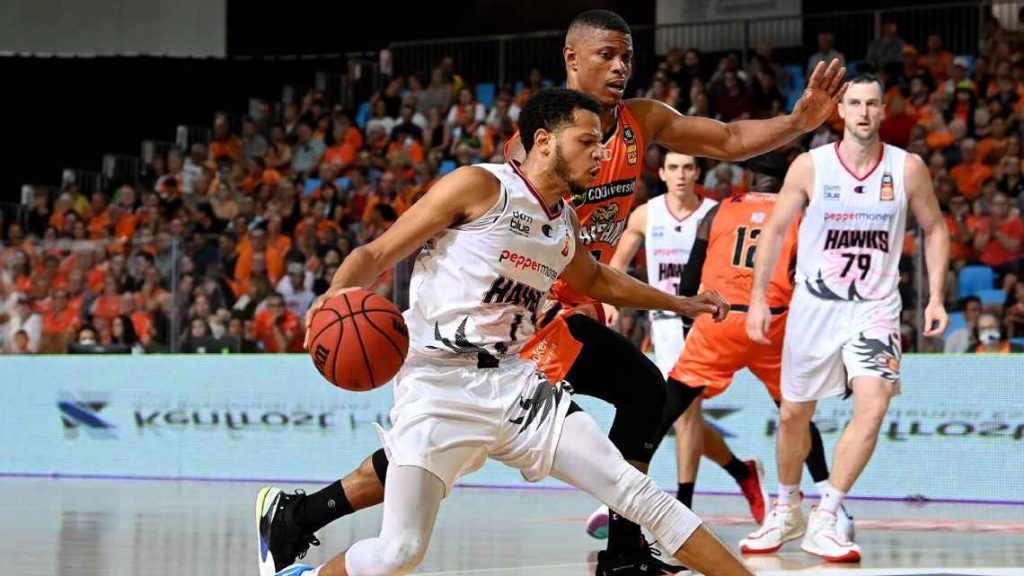 THE Cairns Taipans have claimed a huge upset win over the second placed Illawarra Hawks defeating their opponents in an enthralling contest (101-95). With the lead chopping and changing throughout the game the Taipans put their best foot forward in the final term, exploiting their opponents to win their third game of the season.

It was a nail-biting start to the game with both sides throwing down plenty of buckets and showcasing their scoring prowess to keep the scoreboard flowing. The Taipans took the lead in the first quarter edging out their opponents by a point but the Hawks changed gears in the second term with their bigs taking charge. Finding the basket with relative ease, Illawarra found their groove to create some separation on the scoreboard and take a handy lead into the main break.

Down at half time, Cairns came out with a renewed sense of confidence and attack making the first points of the second half, to get the game back on their terms in the opening minutes. The Taipans reduced their buffer to a mere two points and looked set on keeping things that way with their intent and pressure, however Illawarra was not about to lie down. With the lead getting out to as much as 12 points midway through the third term, the Taipans rallied only facing a three point differential at the final change. But things got even more interesting in the final moments of the fourth quarter thanks to Cairns dominating the term. Playing the game on their terms, the Taipans kicked things up a notch to post a whopping 33 points to 24 to secure a win and claim a big scalp.

Shooting percentage lent in the favour of the Taipans securing 34 of their 73 attempts at 46 per cent from the field and while the Hawks converted more shots with 35 their overall accuracy was down at 40 per cent. From beyond the arc the victors also had the upper hand sitting at 51 per cent compared to 43 per cent. The Taipans did the most damage in the paint with 26 points to 22 but it was a different story when it came to scoring off turnovers with the Hawks showcasing their class to capitalise through their 19 points to eight.

The Hawks outclassed the Taipans with ball in hand to secure 18 assists to 16 while they also impressed when it came to steals and blocks with (6-3) and (6-2) respectively. On the rebounding front Cairns just edged out the Hawks with 47 rebounds to 45.

Captain Scott Machado had the ball on a string throughout the contest, posting 31 points for the match while also dragging down eight rebounds, all of which were defensive. Machado well and truly led from the front for the Taipans controlling proceedings and using his basketball nous to dictate the play with his six assists. Jordan Ngatai also impressed for Cairns recording 17 points at 66 per cent from the field while also collecting four rebounds. Mirko Djeric plied his trade registering 16 points in the win to accompany his three rebounds and five assists as Majok Deng and Cameron Oliver sunk 13 points apiece. Oliver also recorded eight rebounds, one steal and two blocks.

For the Hawks it was Tyler Harvey that once again took charge posting a team-high 24 points in his 32 minutes on court. Harvey’s stat line did not stop there picking up five rebounds, six assists and two steals. Justinian Jessup was not far behind with 17 points of his own, one rebound and two assists as Deng Deng kept the scoreboard ticking over with 17 points and five rebounds. Cameron Bairstow was a force to be reckoned with off the bench recording a double-double with his 10 rebounds and 13 points while Sam Froling was the only other player to reach double figures with 12 points.