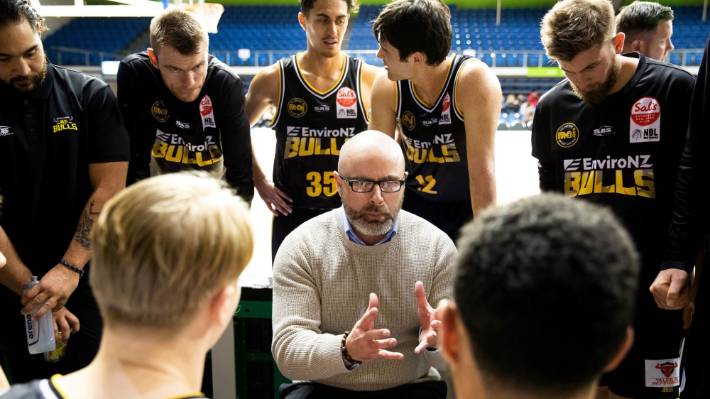 FRANKLIN Bulls entered the 2020 Sal’s National Basketball League (NBL) with plenty of unknowns, having yet to take to the court in a competitive match, or coaches knowing how they would gel in a modified season with little preparation. Despite losing the first two games, head coach Liam Simmons said he never lost the faith.

“The goal is to keep getting better each time we hit the floor,” he said. “Even though we lost two early I still felt we were getting better and that is all we are focused on is that steady growth.”

Since losing the opening two games, the Bulls have been on a sensational run of form, winning four consecutive games, and five of the last six ahead of their next match with Auckland Huskies tonight. In that run, they have managed to conquer every side except the Airs who have had the Bulls’ measure twice. While Simmons no doubt has some plans to turn that around, he said the team was focused on its next game.

“Fortunately that is a bridge (facing the Airs) we don’t have to think about crossing this week,” he said. “Right now it is Huskies and Giants. “I’ll let you know when we get there.”

As this shortened season has shown, teams are very capable of turning around results from the first encounter to the second. A perfect example is the Bulls’ performances against the Canterbury Rams. In the first match the Bulls fell agonisingly short by three points, before turning it around last week to romp to a 25-point win. Simmons attributed lessons learnt from the first outing as to the reason behind the turnaround in the second matchup.

“We have done a nice job of collecting experiences and I felt this time around we did a nice job of staying engaged defensively,” Simmons said. “The Rams are a first class organisation who are well coached and it is unfortunate they have had such a difficult time with injuries.”

One player who has really shone this year for the Bulls is Isaac Davidson, with the young talent ranked in the top 10 for shooting, as well as two and three-point shots made. His accuracy has been a massive help to the Bulls in their run to where they are today. When asked if the Bulls had expected Davidson’s output to be at the level of Most Valuable Player (MVP), Simmons said he knew Davidson had it in him.

“Isaac is a special talent, he plays with great poise and patience,” he said. “(He’s a) natural scorer and shot maker and it’s a credit to his teammates who have created an environment where he can step in and be himself. “Speaks volumes about our group and their commitment to our culture.”

Looking ahead to the run home in what is ultimately more than halfway through – just two weeks and finals remain – the Bulls are in a much better position than the opening week, but Simmons said he was no more comfortable nor complacent with how Franklin was travelling.

“I feel as apprehensive as week one if I am honest – don’t sleep much constantly worried about this thing game to game,” Simmons said. “This league is well coached and teams compete hard every night, you have to play with great energy and effort to compete.”

For now, Simmons is getting his side to focus on a number of areas to continually improve over the course of the next two weeks and be ready to rumble for finals.

“We want to keep growing defensively and increase our efficiency offensively down the stretch,” Simmons said. “No matter what the scoreboard reflects we want to have great attitudes, effort and energy because that is who the Franklin Bulls want to be going forward.”