Bulls prevail in inaugural ‘Battle of the North’ 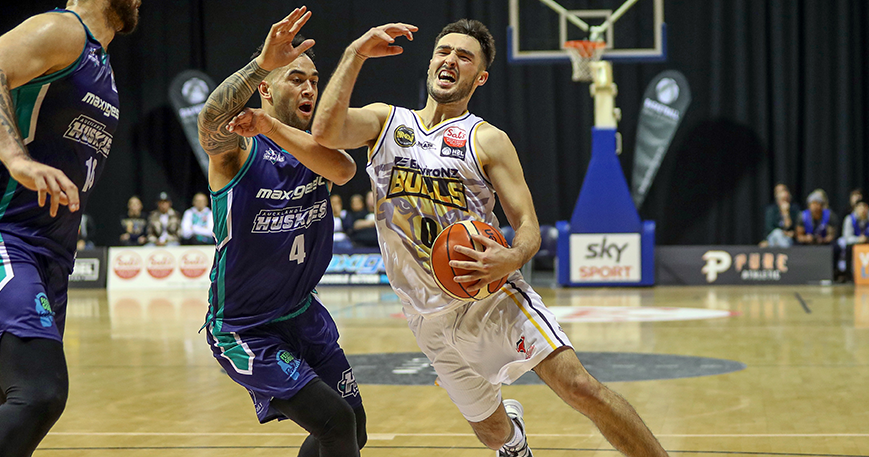 THE second-last game of the first week back in the NZNBL (New Zealand National Basketball League) gave us the inaugural ‘Battle of the North’ matchup as the two Auckland teams faced off in the Franklin Bulls and the Auckland Huskies. With both teams looking for their first victory, a desperate battle beckoned in what is hopefully the start of an enthralling rivalry for years to come.

The two lowest scoring teams in the competition provided a low scoring affair from the beginning, however, fans were still treated with the Bulls recording a tight four-point victory.

The Bulls enjoyed a two-day break, as the Huskies did not have much to enjoy after suffering a 28-point loss to the Jets the previous night. Auckland would be boosted with the introduction of Izayah Mauriohooho Le’afa who was coming off a 14-day quarantine period after returning from Sacramento State University.

Melbourne United big man Tohi Smith-Milner would open the scoring with an elbow jumper, but a slew of missed shots and scrappy play wouldn’t see another score for almost two minutes. Dom Kelman-Poto then asserted himself into the game with a defensive rebound turning into an and-one opportunity. His missed free throw would spark a run of seven consecutive missed free throws from both teams, typifying a low-scoring game with a 16-13 opening quarter the Bulls way. Even though Isaac Davidson and all-time league three-point record holder Leon Henry provided some excitement briefly trading buckets, there wasn’t lots to cheer about early on.

Taine Murray would start the second quarter on the bench having played the whole first quarter, ending with a neat hop-step layup. Bulls big man Sam Timmins started the second quarter with a big block, setting the tone with his inside presence. Mauriohooho Le’afa would air ball a jumper, missing his sixth shot in a row, with the next score coming two minutes later in the form of a Henry layup. He would then give the Huskies the lead with a triple before Kelman-Poto tied it up with a put back layup. Another big block from Timmins and score from Kelman-Poto would force Huskies coach Kevin Braswell to call a timeout.

Perhaps hoping to ignite the rivalry, the Bulls’ mascot stomped on Henry’s jersey as he was initially a Franklin recruit prior to the Coronavirus shutting the league down. Almost three minutes later, Kelman-Poto would find himself in foul trouble, subbing out of the game. Young guns Davidson and Murray would then go head-to-head stealing the ball off each other before Smith-Milner would close the quarter out with an unconverted and-one opportunity and a three to give the Huskies a one-point lead, 24-25, heading into the main break.

Despite Timmins’ four blocks, it wasn’t stringent defence causing the low scores, both teams were just shooting poorly. The Bulls were shooting 33 per cent while the Huskies were shooting 28 per cent for the half and there was only one made free throw from 11 attempts from both teams. Also, the Bulls found themselves shooting early in their possessions with few passes, recording just one assist compared to the Huskies’ six.

Henry would start the third quarter with a mid-range fade from the post, setting himself up for eight points for the quarter, including two straight from deep. Timmins continued to give the Huskies nightmares defensively, taking his blocks tally to six, guarding the paint vigilantly in the Bulls’ 2-3 zone. Though he would have liked to have had more influence scoring, he would set some strong screens for his teammates to score from. Marvin Williams-Dunn scored his first and only points for the game with a silky cut down the middle of the lane for a layup giving the Huskies a one-point lead with three minutes left in the quarter.

The momentum would swing Franklin’s way from there as point guard Chris McIntosh would grab a huge offensive board leading to a foul. He made four free throws in less than two minutes, as an Mauriohooho Le’afa mid-range jumper would get wedged between the ring and the backboard. Timmins then took his presence outside to finish the quarter with a triple. The Bulls would go into the last quarter with a four-point lead.

Mauriohooho Le’afa made his solitary bucket at the start of the last quarter as he would end the night shooting one for 15. Franklin’s Everard Bartlett would be important down the stretch with his third of four three pointers in the game giving the Bulls a game-high eight-point lead. The Huskies worked their way back into the game on the back of Smith-Milner. His best effort at the line would tie the game up, before Davidson’s go-ahead step-back jumper would give the Bulls the lead again. Davidson’s two free throws would end the game giving the Bulls a hard-fought four-point victory and their first for the season.

His 19-points would leave him the game leader to go with his seven rebounds. Bartlett’s accurate 13-points proved important at the end, while Jackson Stubbins and Kelman-Poto each recorded eight rebounds. Henry’s 16 points, 15 rebounds, six assists and three steals kept Auckland in the game at times, along with Smith-Milner’s 18 points and Murray’s 12.

Despite the exciting finish, both teams will be looking to shoot the ball a lot better which should come with more practice. The Bulls move to fifth place on the ladder and will be looking to add to their wins tally when they face the Nelson Giants on Tuesday, while the winless Huskies will prepare for the best scoring team in the league in Taranaki Mountainairs.