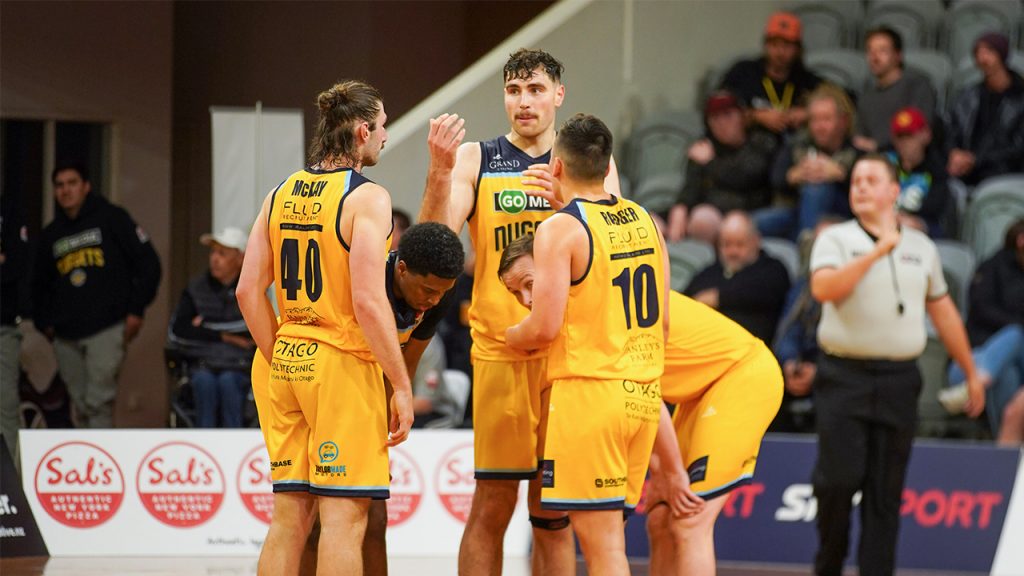 TWO counter-contrasting matches in the New Zealand National Basketball League (NZNBL) competition saw the Otago Nuggets and Franklin Bulls reign supreme to collect their first wins of the season. Whilst the Nuggets managed to do it fairly comfortably with a dominant 27-point win over Taranaki Mountainairs, the going was much tougher for the Bulls, surviving a momentum-swinging game and a tense final minute to salute by the barest of margins.

In the Bulls and Jets thriller, the Bulls led by as much as six points with 3:09 on the clock in the final term. Daishon Knight was threatening to spoil the party, with back-to-back baskets – and a Deandre Daniels block on Josh Selby – cutting the deficit to just two points with 2:29 left. Nicolas Fee‘s successful free throws just pushed the lead out to two baskets with 2:13 on the clock but no less than 12 seconds later, Daniels hit a three-point jumper and the Jets were back to within one point. Despite these baskets, the next two minutes would be a battle of nerves and attrition as neither side scored in that time. The Bulls had three shots and missed them all, with the Jets having two, as well as a couple of turnovers, and an offensive foul, with Knight’s dying seconds jump shot from inside the arc missing and Dane Brooks grabbing the defensive rebound, and the win.

Earlier in the match, the Bulls took a three-point lead into half-time after the teams could not be split following a quarter of action. The Jets were soon to take off though, piling on 29 points to 21 in the third term to race to a five-point advantage by the final break. Despite having the momentum, it was the Bulls who hit back early in the fourth and both teams were trading baskets – and the lead – until a Denhym Brooke triple with 4:09 on the clock gave the Bulls what would be the final lead change of the night. From there they got out to that six-point advantage before the last three minutes of tight basketball ensued.

The Bulls were costly from the field, shooting at just 42 per cent, though making up for it with 12 triples to the Jets’ six. They also took their chances from the charity stripe with 16 of 18 free throws made, whilst the Jets had the 15 of 20. The visitors led the rebound count by eight (50-42), as well as the blocks (5-1), though the winners had more assists (14-9) and steals (9-4) showing off their better ball-handing skills. The huge difference was Manawatu’s ability to punish the Bulls in the paint, with a whopping 60 points in there compared to the Bulls’ 38, who opted for the jumpers. The Bulls penalised the Jets off turnovers – despite having two more than Manawatu – with 19 points to 11 in that area.

Selby top-scored with 27 points, eight rebounds and four steals, whilst Zan Waterman was outstanding, collecting a double-double of 25 points and 14 rebounds. Joseph Nunag came off the bench for 20 points, while Brooks (10 points, six rebounds) was also handy. For the Jets, Jayden Bezzant was electric with 29 points – at 70 per cent from the field – as well as seven rebounds and two assists. It was the work of Shane Temara (18 points, 14 rebounds) and Daniels (15 points, 15 rebounds and four blocks) off the boards that kept the Jets in the contest, while Knight notched up 23 points, three rebounds and three steals in the loss.

In the more one-sided contest, the Otago Nuggets took control after quarter time and never really looked like losing against the Taranaki Mountainairs. The Nuggets took a two-point lead into quarter time – after trailing for the majority of the opening term – but never looked back once they hit the front late in the quarter, scoring 49 points to 26 over the next two terms to race out to a 25-point lead at the last change. It was a tighter fourth quarter, but the Nuggets still capitalised with 23 points to 21, winning 93-66.

Sam Timmins was enormous in the win, picking up a double-double with 22 points, 12 rebounds – five offensive – five assists, three blocks and two steals, teaming up well with Isaiah Moss (28 points, four rebounds, three assists and three steals). Richie Rodger (10 points, three rebounds, three assists and five steals) was also lively across the court, and Josh Aicheson (nine points, four rebounds and five assists) made the most of his 21 minutes on court. For the Airs, four players did most of the damage, with Marcel Jones (12 points, 10 rebounds) and Tai Wynyard (11 points, 10 rebounds) picking up double-doubles in defeat. Baxter Fenwick (12 points, three rebounds) and Francis Mulvahil (11 points, four assists and three steals) were the others who tried hard.

Of the four sides, both the Bulls and Airs back up the quickest, set to clash on Thursday night, with the Jets to take on the Canterbury Rams on Friday night, while the Nuggets meet the Jets in Manawatu’s second game of next round on the Saturday evening.