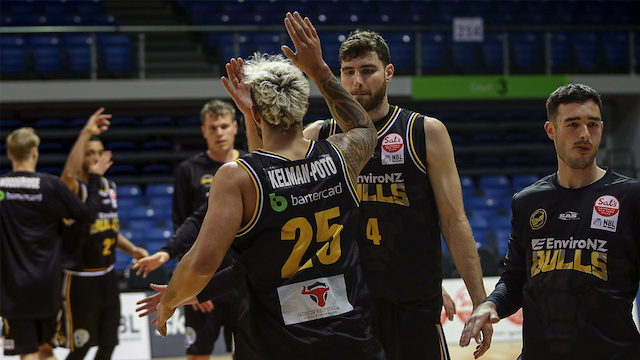 A MASSIVE clash between the Franklin Bulls and Canterbury Rams culminated in a 102-77 finish on Wednesday night, with the game never decided until the fourth when the Bulls pulled away late in the contest. The Bulls’ win meant Franklin has won five of its past six games, whilst handing the Rams their fourth consecutive loss since starting the season at 3-0.

The first quarter was action packed as both teams came out of the gates hot. Franklin Bulls’ Everard Bartlett hit back-to-back to threes, and would not take a shot for the rest of the quarter. Teammate Isaac Davidson was also extra confident in the Trusts Arena, scoring his first eight points with nearly half of the first quarter to go.

The second quarter for the Rams was all about defending the perimeter. Forcing the opposition to do something with the ball, instead of lining up for more uncontested threes. But the first play for the Bulls was a successful swing around for an open three to lead the game 30-20. There just was too much defensive miscommunications for Rams, being just that little too slow to help out. It’s worse when they weren’t even the ones playing the night before.

Along with many other strategic concerns, the Rams had to find a way to stop Davidson who entered the second half with 18 points. But that statistical dominance only told a little story. The truth is, the Bulls were very impressive in how many players they involved in the offence as this was no one-man show. It did help that his team was shooting 62 per cent from the field – they were confident everywhere.

The beginning of the third looked like the Rams were ready to turn the page. They came out with unseen energy, first with a hard drive then to force a turnover. But their defensive problems swung the other way. They went from allowing too much space for shooters to allowing too much space for driving to the ring. The Bulls adjustment to attack the paint was quick and effective, as the score sheet went back and forth for most of the quarter, always holding about a 10-point lead.

The final period was more of the same with selfless passing, hard screens as the Bulls continued to shoot from close. Making only one shot from the perimeter all quarter, the Rams were unable to stop the momentum as the Bulls looked to be having fun. The game ended 102-77, a massive win for the Bulls as they out-scored the Rams by 13 in the last quarter.

Dominique Kelman-Poto was incredible for the Bulls. A season high 22 points, off 78 per cent field goal percentage, while collecting seven rebounds. His game summarises the whole Bulls’ roster performance. He was far from alone however with Davidson shooting 20 points, three rebounds, six assists and two steals, while Bartlett (11 points, four rebounds and two assists) and Nikau McCullough (11 points, one assist) also hit double-figure points. Franklin shot at a much higher clip of 56.9 from the field and 48 per cent from long-range compared to their opponents’ 48 and 25 per cent respectively.

It was too bad for Alexander Talma, who played his guts out for the Rams with 25 points and seven rebounds. Consistent Rams’ performer Taylor Britt had a quiet night with 10 points, four rebounds and one assist, while Sam Smith was the only other player in double-figure points with 11, as well as three assists. Thomas Webley worked hard off the bench for nine points and nine rebounds, as the Rams dominated the boards 35-24, but had nine more turnovers (15-6).

The Rams will have the chance to break their losing streak against Auckland Huskies tonight, while the Bulls now have a six-day break until they face off against the Huskies on Tuesday.