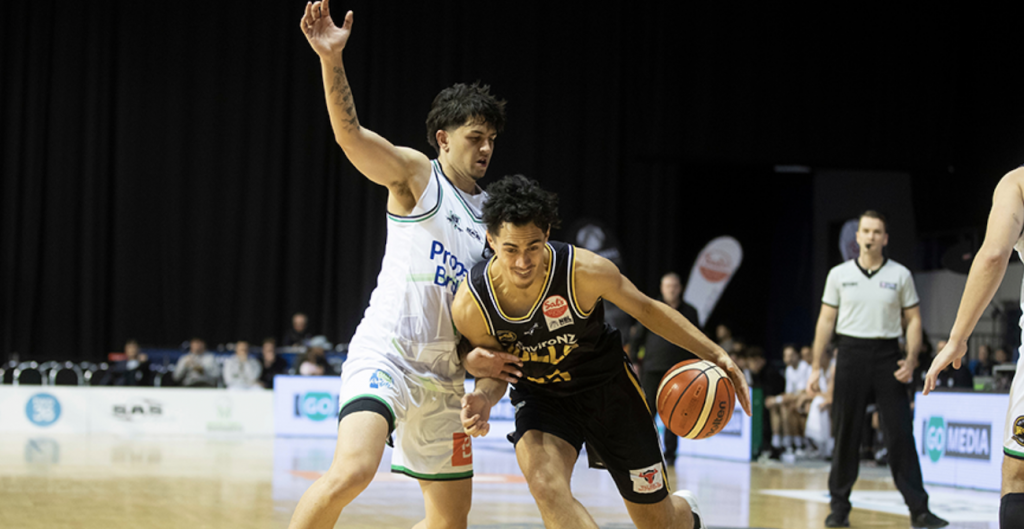 FRANKLIN Bulls have cemented themselves as the hottest team in the 2020 Sal’s National Basketball League (NBL) right now after earning their fourth straight win, with another convincing victory over a physical and scrappy Manawatu Jets side without Hyrum Harris.

The Jets, who were in-form at the opening tip following their rout of the Canterbury Rams on Wednesday night, had to figure out how to handle the Bulls on the boards and around the basket, as they were without their rebounding machine, Harris. It was announced that Harris would be out for the next one to two weeks due to a hip flexor injury sustained in their clash against the Rams.

However, thanks to the quick start from 202cm tall forward in Taane Samuel, the Jets took the early lead with their noses in front 9-5, with Samuel taking credit for five points in swift fashion. As the Bulls quickly un-did Manawatu’s early start out of the blocks with an 11-0 run of their own, Franklin found themselves with a seven-point lead at the midway point of the first.

With Franklin shooting well in the first quarter, nailing 50 per cent of their opening 20 attempts, the Bulls were threatening a double-digit lead heading into the first break. A Jayden Bezzant jumper from the elbow would keep the opening period rather level-headed, as the Bulls boasted an eight-point buffer for themselves, 25-17.

It was evident early on in the second quarter that Manawatu focused in on Sam Timmins, crashing the boards hard and giving him extra contact where possible in and around the key. Timmins would work for his eight first half points, but Manawatu’s Ashton McQueen would help his side bite into the deficit that the Bulls created by putting up eight of the Jets’ points in a row. As a result, Manawatu were now forcing a two-possession game towards the end of the first half. A Bezzant dribble jump-shot with a few seconds remaining capped off a stellar second quarter for the Jets, allowing them to sit just four points behind an ever-growing confident Bulls side.

McQueen’s accuracy carried over the 20-minute break between halves, evident in him hitting his third three-pointer to open the second half. But Timmins’ ability to flip the switch was once again a prominent aspect of his performance, as a hook shot and a three-point play from the center would give his team some breathing room.

With further back-and-forths occurring frequently on the offensive and defensive ends for both teams, a testy and hard-nose brand of basketball would take place at Trusts Arena. But, this did not deter the hottest team in the League, as the Bulls would string together an awesome 17-2 run, which included a run of 10 consecutive points putting Franklin in the driver’s seat up 70-55 with a quarter still to play.

Despite two quick baskets for the Jets in their bid of a comeback, a put back-jam from Timmins all but deflated Manawatu a couple of minutes into the concluding quarter. A couple threes from Jets Guard Nicholas Fee made his team’s last breath a gallant one, but an early ejection for Thomas Vodanovich hindered any ability to make a serious attempt at a late charge. A beautiful no look assist by Jackson Stubbins to Dominique Kelman-Poto concluded the contest nicely, with the Bulls running away with their fourth win in a row, 83-72 being the final score line.

The Bulls could look reliably on their ability to score from the free-throw line, as they pummelled the Jets inside and around the rim, converting 15 of the 19 attempts they earned at the line compared to Manawatu’s seven of nine. The Bulls also stockpiled 46 points in the paint, dwarfing the Jets’ trivial 18 points in the area.

Notable contributors to Franklin’s night include Samuel Timmins, who grinded away to get his 17 points and eight rebounds. Whereas three other individuals in the starting five collected double-digit point totals, with Kelman-Poto securing 15, Everard Bartlett’s 13 and Isaac Davidson who scraped away with 10. Lastly, it is worth noting Nikau McCullough’s 11 points and six rebounds.

Bezzant’s 20 points and two steals were the biggest eye-catchers in Manawatu’s performance, while Taane Samuel’s 17 points and eight rebounds encapsulated a solid night’s work and Vodanovich falling one basket short of a double-double (eight points and 12 rebounds) might have been different if he was not ejected minutes prior to the final buzzer.

The Jets are yet to secure back-to-back wins up to this point in the season, but perhaps they can bounce back with a win over Taranaki later tonight. Meanwhile, Franklin too face the Airs come Tuesday night and can start to take control of the rest of the League as they eye down a fifth straight win.