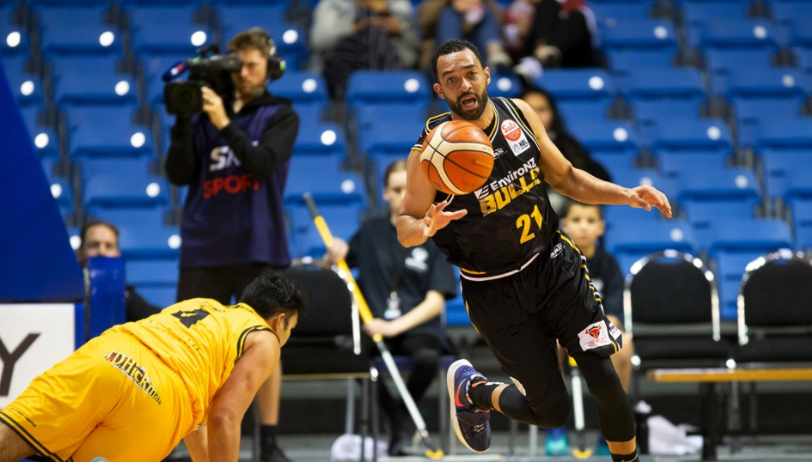 TARANAKI Mountainairs’ bid to finish within the top two in the 2020 Sal’s National Basketball League (NBL) standings is officially over, following their 92-65 drubbing by way of the Franklin Bulls, as Everard Bartlett’s perfect night from the field helped cement his side their seventh win of the campaign.

Prior to last night’s meeting, the Bulls had fallen to the Airs in their two previous encounters. How Franklin looked at getting lucky the third time round, was to limit the effect of the Airs’ role players, which also included the much anticipated matchup between Samuel Timmins and Tai Wynyard, as each big-man looked to gain the upper hand over the other.

The Bulls kicked the contest off with Bartlett’s three free-throws, but that remained the only event of the opening couple of minutes, as each side missed their initial five attempts from the field. Three minutes in however, Timmins’s layup got the ball rolling for the Bulls. The layup was further compounded by Isaac Davidson’s first three-pointer, capping off a 9-0 start to kick off the first quarter. As a result of Franklin’s fast-paced start, Taranaki repositioned their defence to a Zone setup, but to no avail, as every stop the Bulls made triggered a loud response from their bench. After both teams gradually became more accurate over the course of the quarter, it was the Bulls that tightened their sights from beyond the arc, knocking down four from deep to round out the opening 10 minutes and putting their necks ahead by 11 at the first intermission.

Leading in to the second quarter, 26-year-old Chris McIntosh continued the barrage from three-point range and continued to separate themselves from an Airs offence that struggled to find their target. A beautiful no-look assist by Davidson with a few minutes remaining in the half to Nicholas Barrow, prolonged the Bulls’ momentum. The Airs, they could not muster a response. Franklin’s target finder was working at maximum effort, shooting over 50 per cent since the fourth minute of the first quarter. Three-pointers from each of their stars in Derone Raukawa and Marcel Jones, cut into the deficit with less than a minute to go. But Bartlett struck a dagger into the arm of Taranaki with his second three of the contest and the fourth for the team in the second quarter alone, putting Franklin ahead by 22 at the midpoint of the ball game, 49-27.

The Bulls killed Taranaki on the boards, winning the rebounding contest in the first half 25 to 16, which translated into 10 second chance points as a result. Furthermore, Franklin’s bench proved their mettle in the opening 20 minutes, contributing 17 points to the team’s 49 in total at half-time, compared to the Airs’ four. This left Doug Courtney with a mild headache during the break, as he scrambled for second half solutions. For the majority of the third period, both sides managed to trade baskets, until Bartlett really started to put his stamp on the game. The 34-year-old’s back-to-back threes extended their lead to 29 points, as they continued to create separation for the Airs..

To make matters worse for the Airs, Nikau McCullough decided to join in on the shooting party, converting back-to-back threes as well. However, a small scoring run by Shane Temara, Francis Mulvihill and Jones brought the scoring difference back to 22 points with the final 10 minutes yet to unfold. The main headline at three-quarter time was easily the perfect shooting from Bartlett up to this point, going four from four from the field, nailing three threes to accompany those shots. Adding three free-throws, it would accumulate to 15 points through 18 minutes of court time over three quarters, putting him in good stead for man of the match honours with a quarter to go.

Raukawa began the fourth taking matters into his own hands, scoring eight quick points to begin the phase. However, it would take more than an individual to make a substantial dent in Franklin’s defensive blockade, as another Bartlett three stunted Taranaki’s fightback. The Airs would not make any more headway for the rest of the game, as Franklin held Taranaki to just 65 points at the conclusion of play, as Franklin would knock off a side which they had not beaten in two prior meetings by 27 points.

Bartlett continued his perfect form from the field, despite a quiet fourth quarter. He finished with 18 points off of five three-point shots. Alongside Bartlett, Isaac Davidson and Dominique Kelman-Poto added to the team’s cause significantly. Davidson amassed 17 points, five assists and four rebounds, while Kelman-Poto compiled 16 points, six boards and five assists.

Looking at the Airs’ performance, their 19 turnovers deflated their offensive intentions, nevertheless Raukawa and Jones remained the side’s constant. Raukawa still managed 19 points on 50 per cent shooting, whereas Jones fell one board short of another double-double, ending his night with 17 points and nine rebounds. In their final game of the regular season, the Airs’ loss last night solidifies their position outside the top two, as Franklin gifted Taranaki its sixth loss of the campaign. On the other hand, the Bulls go above .500 and improve their record to seven wins and six losses.

The outcome for Franklin ties themselves for fourth in the standings next to the Auckland Huskies, as they compete in their final game before the finals against the Canterbury Rams in Saturday’s opener.