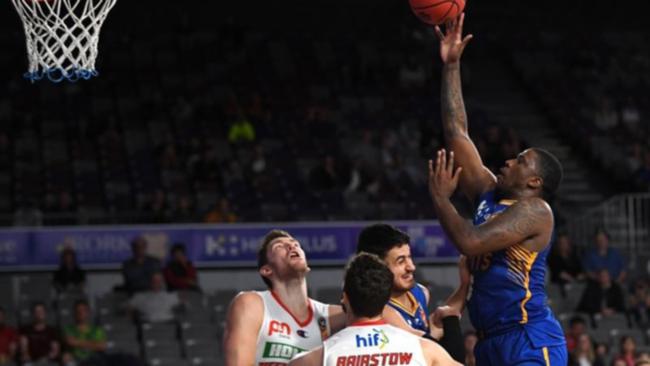 The Brisbane Bullets did the unthinkable against Perth Wildcats last night with the home side coming back from as much as a  whopping 18 point deficit to steal the win right from underneath Perth’s nose, 91-88. It was a one man show with Lamar Patterson proving his worth and finding his stride back in the Bullets outfit as the bigman completed the final play of the night to give his side are much needed victory in order to stay in the race for finals which is quickly approaching.

It was not all smooth sailing though for the Bullets with Perth bursting out of the gates in the opening quarter of play with Will Magnay, the former Bullets player flexing his muscles for his new side. Magnay was not backwards in coming forwards showcasing his strength around the rim while his teammates also got involved in the action to gift Perth a handy buffer heading into quarter time. Magnay was not alone on the points scoring front as Clint Steindl capitalised on his extra court time and kept the scoreboard effectively ticking over for the visitors. The Bullets simply could not keep up and despite the best efforts of both BJ Johnson and Jason Cadee from beyond the arc to peg back the margin, within a blink of an eye the lead had been blown out once again as Perth boasted a 14 point lead.

Brisbane needed to find a spark in the second quarter and they did just that as they went on a point scoring spree of 11 to 3 to call the margin back to single digits. But every time Brisbane got close, Perth found a way to work their magic and extend the lead once more. After a scintillating first quarter of basketball, Steindl did not slow down as he took his total to 19 points for the first half spurring the Wildcats on away from home. However the main issue for the Bullets was their inability to capitalise on turnovers and not treasuring ball racking up 19 turnovers in the opening half alone.

The third quarter is known as the premiership term for a reason and if the time was now, Brisbane knew it. They came out of half time with a real pep in their step as they drained nine consecutive points thanks to the efforts of Nathan Sobey and Patterson. With the Bullets mounting a comeback, it did not take long for Matt Hodgson to inject himself into the game sinking a handy lay-up to get back within seven points before he single-handedly culled the margin to a mere four points. The intensity continued to rise, keeping in mind there was still a quarter left to play as Perth pulled away once again off the hands of none other than Steindl. By the time the three-quarter time buzzer came around Perth held an eight-point lead but were in for a challenging final term.

A challenging final term is exactly what the second placed side got. With Bryce Cotton struggling to find the rock and Todd Blanchfield rested it was up to John Mooney to lead the troops. While he did for majority of the game, the Bullets dug deep, determined not to let their finals hopes slip through their fingers as Sobey and Cadee showed their leadership and class for the Bullets. Tensions boiled over with Magnay on the receiving end of a spray from his former teammates while Mitch Norton was fouled out of the game for Perth as things got a bit out of hand given the frantic finish to the game. Brisbane could sense a win and as the clock ticked down Cadee landed a game-defining triple. Going on an 11-point shooting spree, the Bullets dwindled the deficit to a mere two points before Patterson put the icing on the cake with mere seconds left on the clock.

It was a match for the ages, as each and every one of the fans in the arena sat with bated breath as the Bullets pulled off an almighty comeback. Patterson was the mastermind behind his sides resurgence sinking a team-high 23 points. Hodgson was also influential thanks to his double-double of 16 points and 12 rebounds as Johnson had his best game since joining the squad producing 13 points at 66 per cent from the field. Both Sobey and Cadee played their role with 16 points each as the latter also racked up five assists. Mooney was the go-to player for the Wildcats as he finished with 18 points and seven rebounds as partner in crime, Cotton, was down on his lofty standards only collecting 20 points and seven rebounds. Steindl had a game to remember drilling home 25 points  as Magnay also notched up 11 points.